Trump calls Putin to congratulate him on re-election 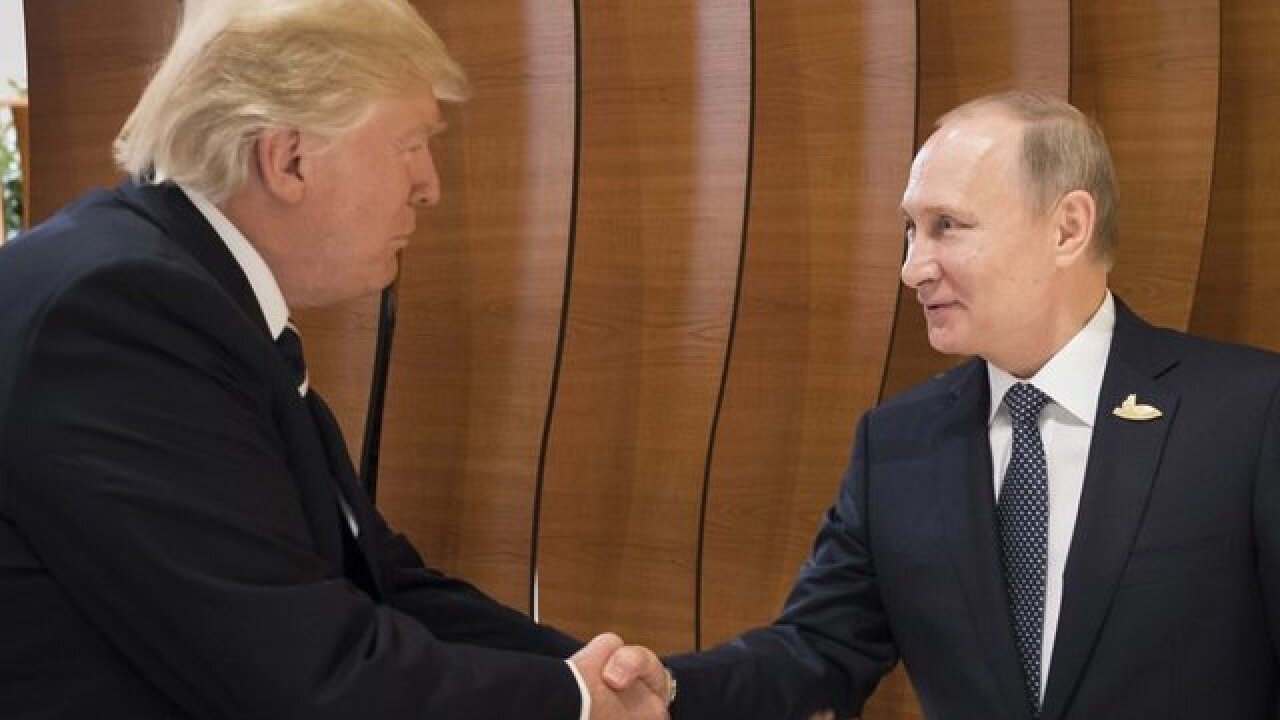 MOSCOW (AP) — President Donald Trump called Russian President Vladimir Putin on Tuesday to congratulate him on his re-election to a fourth term, and they discussed arranging a meeting against the backdrop of heightened tensions between their two nations over election meddling.

Trump told reporters in the Oval Office that the meeting could happen soon and they would likely follow up on Putin's recent declaration that he does not want an arms race with the United States.

But just as noteworthy was what was not discussed: In his conversation with Putin, Trump did not raise Russia's election interference or its suspected involvement in the poisoning of a former spy on British soil, according to White House press secretary Sarah Huckabee Sanders.

A number of Republicans criticized Trump for making the call. Senate Majority Leader Mitch McConnell said "the president can call whomever he chooses" but noted that "calling him wouldn't have been high on my list." And Sen. John McCain of Arizona ripped Trump for congratulating Putin on winning another six-year term in an election whose outcome was never in doubt.

"An American president does not lead the Free World by congratulating dictators on winning sham elections," said McCain, who chairs the Senate Armed Services Committee and has pressed the Trump administration to respond aggressively to Russia's interference in the U.S. presidential election.

Sanders defended the call, and noted that then-President Barack Obama made a similar call at the time of Putin's last electoral victory. "We don't get to dictate how other countries operate," Sanders said.

Trump's call came after the White House imposed sanctions on Russia for its interference in the 2016 election and other "malicious cyberattacks."

Russia has also received global condemnation after Britain blamed Moscow for the nerve agent attack that sickened Sergei Skripal and his daughter. Russia has denied the accusation. Trump ignored a shouted question in the Oval Office on whether he raised the poisoning in the call with Putin.

Trump has long been reluctant to publicly criticize Putin. The Kremlin said in a statement that Trump and Putin spoke about the need to "coordinate efforts to limit the arms race" and for closer cooperation on strategic stability and counterterrorism.

"Special attention was given to considering the issue of a possible bilateral summit," the Kremlin statement said.

In addition, the two presidents expressed satisfaction with the apparent easing of tensions over North Korea's weapons program, according to the Kremlin.

No details were released about the timing or location of the possible meeting, which would be the third since Trump took office in January 2017. They met on the sidelines of an international summit in Germany last summer and again more informally at another gathering of world leaders in Vietnam in November.

The presidents "agreed to develop further bilateral contacts, taking into account changes in the U.S. State Department," the Kremlin statement said in a reference to Trump's decision to replace Secretary of State Rex Tillerson with CIA Director Mike Pompeo. Russia has repeatedly said it hoped for better ties with the U.S. under Trump.

The White House had said Monday that it was "not surprised by the outcome" of Sunday's presidential election in Russia and that no congratulatory call was planned.

Trump continues to grapple with the shadow of the ongoing investigation into whether his campaign colluded with Russian officials during the 2016 election.