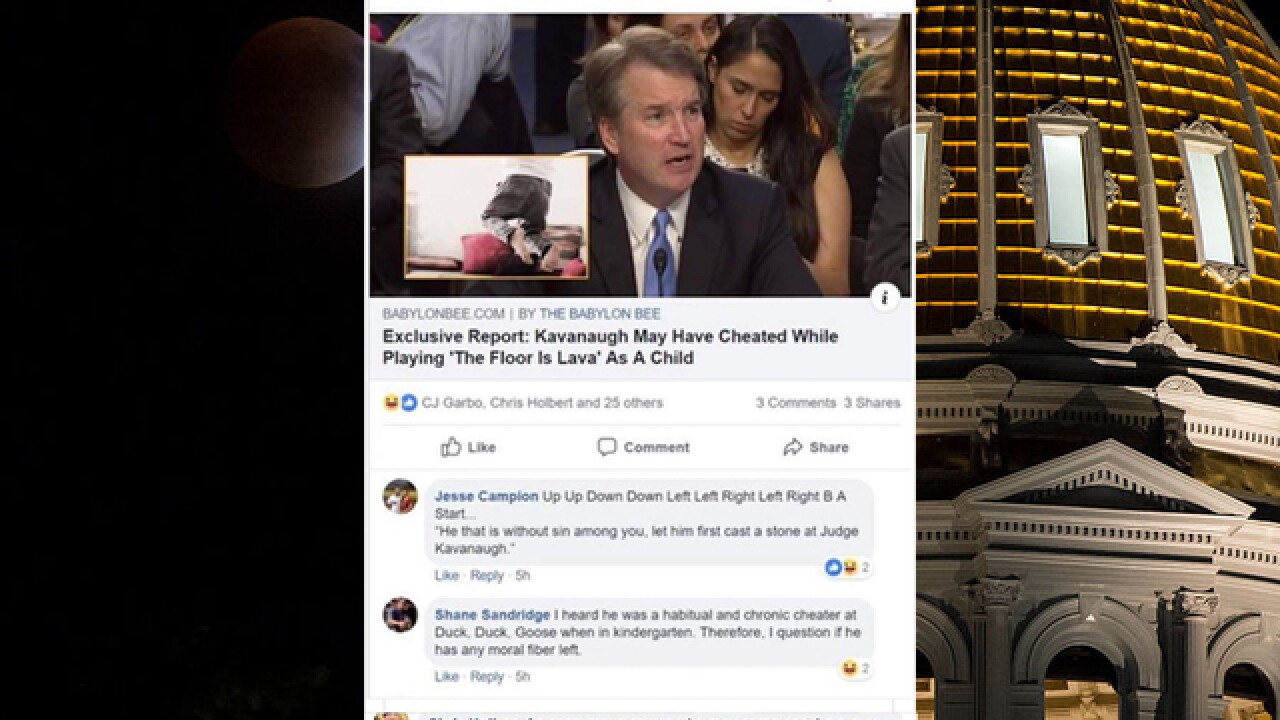 DENVER – Top Colorado Republicans on Wednesday responded to a report that highlighted their social media posts regarding a satirical blog's story about U.S. Supreme Court nominee Brett Kavanaugh and sexual assault allegations that date back to his time in high school.

House Minority Leader Patrick Neville, R-Castle Rock, made the post last Saturday on his public Facebook page, in which he linked to a story by The Babylon Bee , which proclaims itself as “Your Trusted Source For Christian News Satire” on its website.

The website posted a story with the headline “Exclusive Report: Kavanaugh May Have Cheated While Playing ‘The Floor Is Lava’ As a Child.” The “story” was posted Friday after Sen. Dianne Feinstein, the Senate Judiciary Committee’s top Democrat, referred a letter from the woman  to the FBI in which she accused Kavanaugh of sexually assaulting her at a party in high school in the early 1980s and after an earlier report of the referral.

At the time, the woman’s name was still unknown, though news reports published the same day detailed many of the allegations she made against Kavanaugh in the letter. But she went public in a story published Sunday in The Washington Post, identifying herself as Dr. Chrstine Blasey Ford. The Washington Post’s report also corroborated some of her allegations with notes taken by Ford’s therapist and conversations with her husband.

Dr. Ford alleges that Kavanaugh groped her, tried to take her clothes off and covered her mouth while inside a room at a high school party. One of Kavanaugh’s friends was allegedly in the room. Kavanaugh has repeatedly denied the allegations but they have roiled his nomination.

On Saturday, before Ford’s name was public but after many of the allegations became public , Neville made a post linking to the Babylon Bee’s story in which he wrote: “At publishing time, new allegations had surfaced that Kavanaugh had utilized the Komani Code to beat Contra on the NES while in college.”

His post, of which Denver7 obtained screenshots early this week, was a reference to a video game system and game that were popular in the 1980s and early ‘90s.

Among those who left comments on the post were Senate Majority Leader Chris Holbert, R-Parker, and Rep. Shane Sandridge, R-Colorado Springs.

“I heard he was a habitual and chronic cheater at Duck, Duck, Goose when in kindergarten. Therefore, I question if he has any moral fiber left,” Sandridge wrote.

“An anonymous source who may or may not have ever been associated with the Little League has allegedly stated that, at the age of nine, Kavanaugh’s right foot did not touch the base when rounding second. #LifeChoices,” Holbert wrote.

The posts were highlighted in a story published Tuesday afternoon by Colorado Public Radio’s Bente Birkeland, who led reporting on sexual harassment issues at the state Capitol over the past year-plus while at KUNC before her move to CPR.

The story, when first published, said CPR had attempted to reach the lawmakers mentioned in the story but that those requests for comment had not been returned at the time of publication.

The posts by Republicans angered Colorado Democrats. Rep. Faith Winter, D-Westminster, who is vying for the hotly-contested Senate District 24 in November and whose sexual harassment complaints led to the expulsion of a fellow Democratic lawmaker in this year’s session, was among those who was unhappy.

“When our House Minority Leader and Senate Majority Leader jokes about sexual harassment and assault, it is no wonder why women do not feel safe working in the Colorado Capitol,” she wrote, in part, on Neville’s post.

Democratic Party Chair Morgan Carroll said that Neville, Holbert and Sandridge should apologize, accusing them of mocking the allegations against Kavanaugh.

Both Neville and Holbert responded to questions Wednesday and denied making light of the allegations against Kavanaugh. Holbert additionally said that CPR published its story before he was able to comment and blamed Birkeland for the stir over the post, saying she “purposefully rushed to publish such a misleading story.”

“I read the Babylon Bee parody Saturday morning. It was satire, similar to the Onion, about seven-year-old Kavanaugh’s foot touching the floor while playing a kid’s game called ‘The Floor is Lava.’ I knew nothing about Dr. Ford or what she was alleging until Sunday. To claim that I was making light of those allegations before I knew about them is false,” Holbert said in a statement Wednesday. “Dr. Ford deserves to be heard and respected. The Babylon Bee satire was not about her or the allegations that she has brought forward. To conflate the two is wrong and misleading.”

Neville similarly claimed he did not know about the allegations made against Kavanaugh that the Babylon Bee satirized, though they had been detailed by many news reports a day earlier by reporters who had read the letter.

“When I created this post for my personal Facebook page this past Saturday morning, the country knew nothing of the accusations made by Christine Blasey Ford. On Saturday morning, the public didn’t even know her name. My intention in sharing the particular satirical article could not have had anything to do with Ms. Ford. There was no subtext of joking about sexual harassment or effort to make light of any serious situation,” Neville said in a statement.

“I shared the post because it had reminded me of a game I played as a child, and I was amused by the references to the game in the article and my own memories associated with playing it. That was my motivation in sharing the article,” he added.

Colorado legislative leaders are set to decide later this year where to go next with the Capitol workplace harassment policy they have been working on making changes to over the past year.

The Senate Judiciary Committee had originally been scheduled to vote on Kavanaugh’s nomination Thursday, though it was rescheduled as Democrats and some Republicans alike call to hear from Ford and Kavanaugh before a vote. However, the partisan divide has become more-deeply entrenched by the allegations and pending confirmation hearings. Both of Colorado’s U.S. senators have said they want to hear from both.