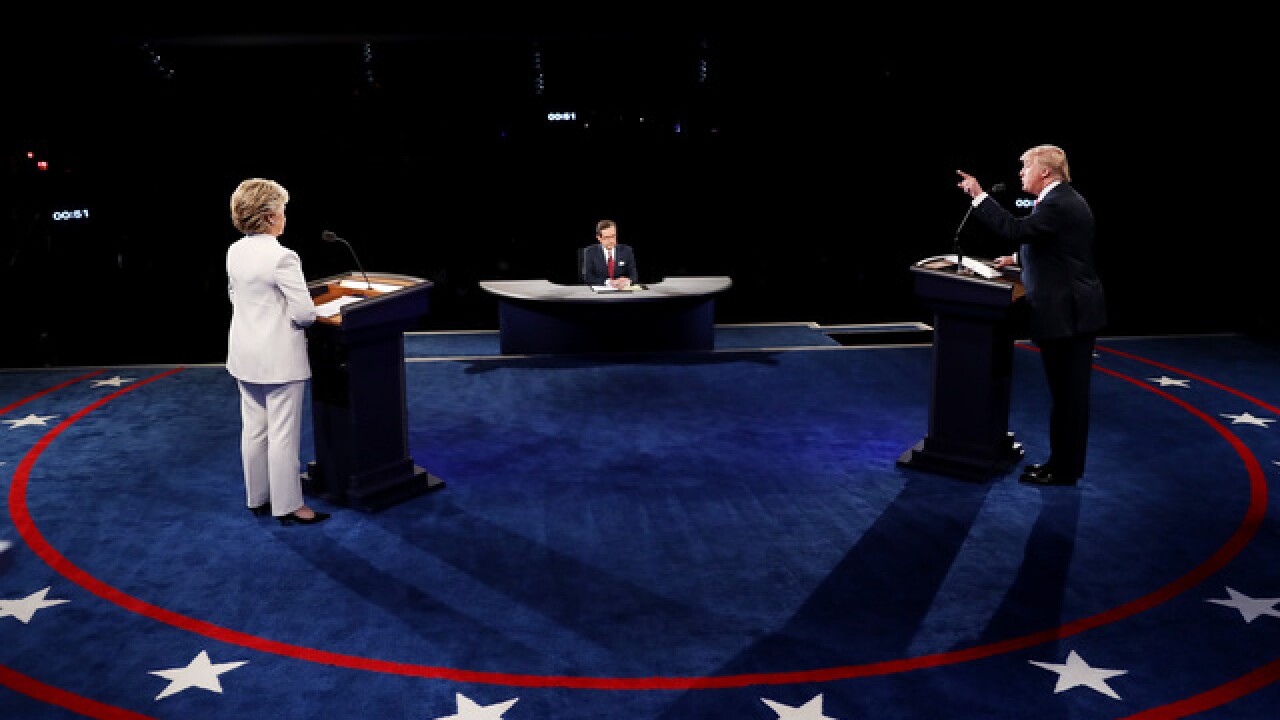 LAS VEGAS (AP) -- Trailing in the polls, Donald Trump had little to lose in his final debate against Hillary Clinton. But he still managed to send shock waves, refusing to say he would accept the results of the 2016 election if he loses.

Trump largely steered clear of making personal attacks against Clinton at the start of the debate, but repeatedly clashed with the former secretary of state as it went on. He called her a liar, questioned her experience and at one point labeled her a "nasty woman."

Unconventional as always, the celebrity businessman wouldn't commit to conceding the election if he fails to win the White House, a staggering declaration by a presidential nominee.

Some takeaways from Wednesday's debate:

More than an hour into the debate, Trump would not commit to honoring the election results if Clinton wins. Pressed by moderator Chris Wallace, Trump said he would "keep you in suspense."

Clinton said she was "horrified" that Trump wouldn't heed the nation's tradition of having a peaceful transfer of power. The businessman has argued without providing any evidence that the election is rigged against him and has suggested Clinton would be an illegitimate president because she used a private email server as secretary of state. He said she "never should have been allowed to run."

Trump faces the possibility of a large gender gap against Clinton and some of his commentary is unlikely to help him with women voters in swing states.

At the end of the night, Trump referred to Clinton as a "nasty woman" and denied again that he had engaged in any sexually aggressive behavior, blaming Clinton's campaign for the series of women who have charged him with groping and other forms of harassment and assault in recent days. The GOP candidate said he didn't know his accusers.

"I didn't even apologize to my wife," Trump said, "because I didn't do anything." In an interview earlier this week, Melania Trump said her husband apologized to her.

The candidates had their first extended exchange over abortion rights of the general election. Trump said he thought Roe vs. Wade would "automatically" be overturned if he is elected because he will appoint justices who are against abortion rights. But he refused to say whether he personally thinks the landmark case should be overturned.

Clinton said she'd strongly defend the ruling and offered a passionate defense of a woman's right to have an abortion, even as Trump accused her of supporting "ripping" babies from their mothers' wombs.

"This is one of the worst possible choices that any woman and her family has to make, and I do not believe the government should be making it," Clinton said.

A question over immigration quickly turned into a sharp exchange over Russia's role in the election, an issue that has become central to the campaign.

Asked about her apparent support for "open borders" in a private speech to a Brazilian bank, Clinton pointed out that the excerpt came from a hack of her campaign chairman's personal email - an intrusion that U.S. intelligence agencies blame on Russia. She called on Trump to "reject Russian espionage against Americans" and cast him as a "puppet" of Vladimir Putin.

Trump shot back that Clinton was the "puppet," saying "of course" he condemns Russia or any other country interfering in the U.S. elections. But Trump said he doubted that Russia had hacked emails from her campaign. Trump went onto say that Putin is not "my best friend." He added: "She doesn't like Putin because Putin has outsmarted her at every step of the way."