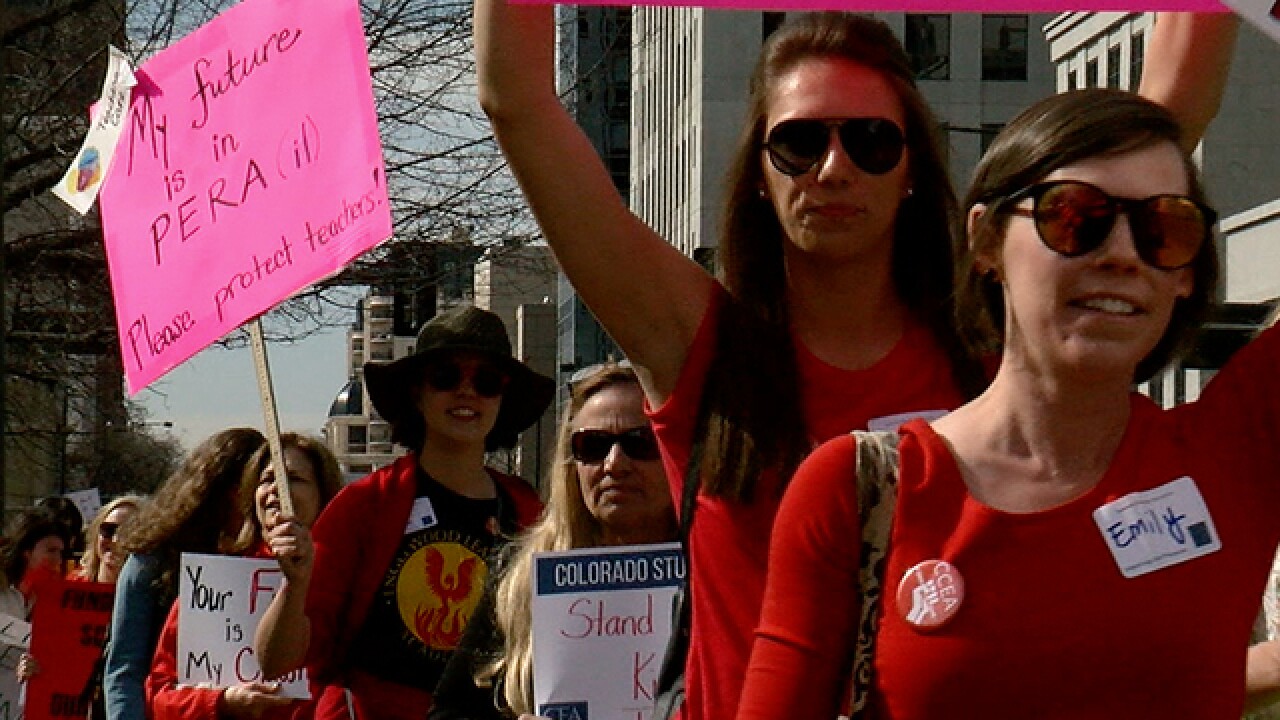 Copyright 2018 Scripps Media, Inc. All rights reserved. This material may not be published, broadcast, rewritten, or redistributed.
<p>Dozens of Colorado public school teachers descended Monday on the state Capitol to demand better pay and pensions as lawmakers inside debated their future retirement benefit program.</p>

DENVER – The sponsor of a bill that aimed to punish Colorado teachers that went on strike pulled the bill ahead of a Senate committee hearing Monday.

Senate Bill 264 was pulled by sponsor Sen. Bob Gardner, R-Colorado Springs, ahead of a hearing Monday in the Senate State, Veterans and Military Affairs committee.

The bill would have prohibited public school teachers from striking by allowing districts to seek injunctions blocking a planned strike.

Should an injunction have been granted under the now-dead measure, teachers could have faced contempt of court charges, which could have led to fines or jail time upon conviction.

Gardner and Rep. Paul Lundeen, R-Colorado Springs, introduced the bill amid a wave of Colorado teacher protests – not strikes – that brought thousands of teachers to the Capitol on several occasions over the last two weeks. The teachers were demanding better school funding, higher pay and a reformed pension system – items lawmakers hope to address by the end of the session.

“If they’re doing it because they think the legislature ought to give them more money, nevertheless it’s a strike against their employer. It’s a strike against all of us,” Gardner told Denver7 regarding his proposal last week. “If the public employees in unions leave the workplace in an organized way, they can say the strike is not against their employer, but that’s who is not receiving their services.”

But Democrats were outraged; all 16 Senate Democrats signed a letter condemning the bill and House Democrats scoffed at the proposal in the face of the teacher demonstrations.

There are less than two weeks left in this year’s legislative session, and lawmakers still have several high-profile proposals they are working to pass, including a new “red flag” bill unveiled Monday.