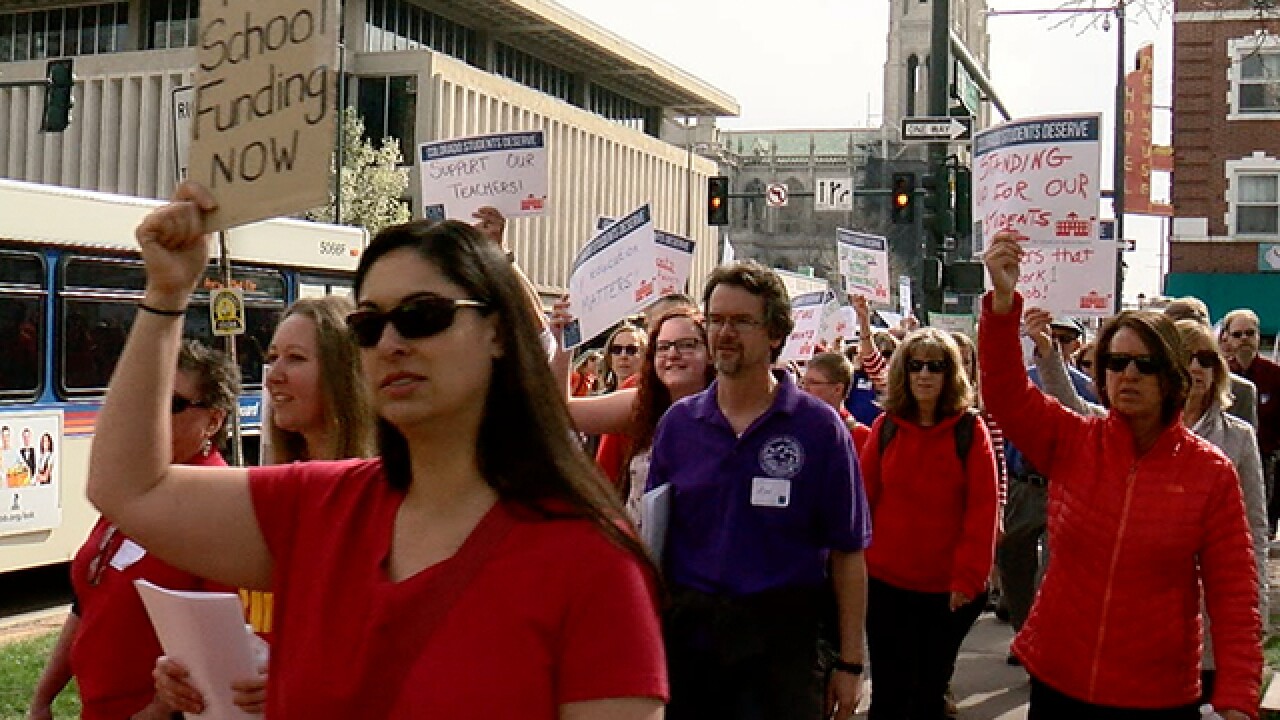 DENVER – Colorado teachers plan to rally again next week for higher pay and better pensions, and some of the state’s largest school districts could close those days due to inadequate staffing numbers.

Jeffco Public Schools has already canceled classes and called a non-student contact day for next Thursday, April 26, after more than 35 percent of its employees took personal days off work to attend a rally at the state Capitol that day.

And teachers working in Denver Public Schools are planning a midday walkout the next day, Friday, April 27, for a similar rally, according to the teachers’ union.

The St. Vrain Valley School District has also canceled classes on April 27 in anticipation of teachers participating in the rally.

And the Poudre School District in northern says it may cancel classes next Friday as well if enough teachers take paid leave that day.

“PSD is expecting a large number of staff to report absences on April 27 in support of this effort,” the district wrote on its website. “If the District determines there is not enough staff available to adequately supervise students, it may designate April 27 as a non-student, teacher workday.”

The district said it would let staffers and parents of children who attend district schools know whether school would be in session next Friday by tomorrow, April 20.

Other districts have said they are aware of the possible walkouts next Friday but hadn’t made decisions as to whether classes would be canceled as of Thursday.

The state currently is underfunding schools by more than $800 million each year, and the teacher shortage and education budget shortage are hitting rural schools hardest. There is some additional money pledge toward paying down that figure in the budget, but Democrats have argued it’s not enough.

“There is a belief among these groups that years of low funding is having a significant impact on our ability to attract quality candidates into the teaching profession, and is impeding the ability to effectively deliver the high level of education experience our students deserve,” Jeffco Public Schools Superintendent Dr. Jason E. Glass said in a letter home to parents Tuesday.

There are approximately 175,000 students who attend Jeffco and Denver public schools. In his letter, Glass apologized for “any inconvenience” the teacher rally will cause families, and noted that April 26 is “Take Our Daughters and Sons to Work Day.”

Some students are planning walkouts across the country Friday as well on the 19th anniversary of the Columbine shooting. The walkouts had been organized after the Florida school shooting in February, but students at Columbine will instead take part in a day of service and encouraging students at other schools to follow suit if they wish.

Denver Public Schools says it is aware that some students may participate in a walkout Friday at 10 a.m., but said Thursday afternoon it was "not aware of any definitive plans for students doing so."

But the district said that Kunsmiller Creative Arts Academy students will participate in a "peace walk" in Harvey Park; Kepner Legacy Middle School students will line up alongside the school for about 20 minutes to support any walkouts; and there will be on-campus activities at the Denver School of the Arts.