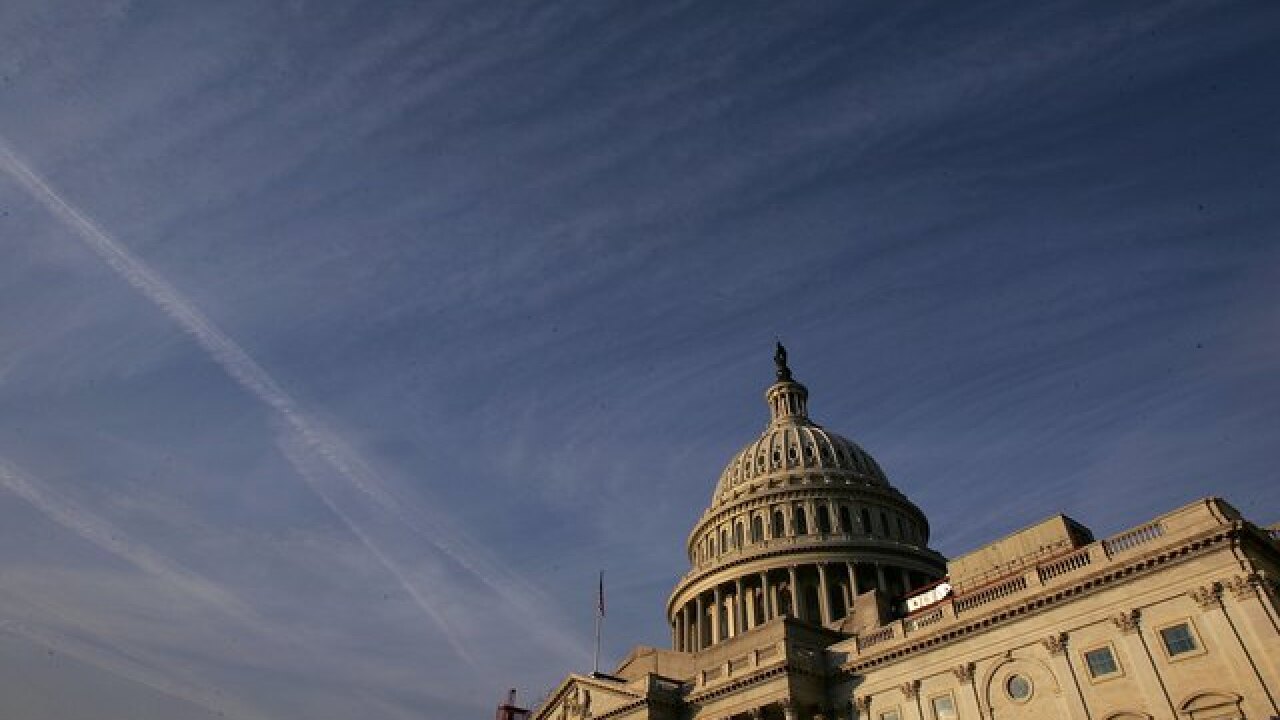 Disputes remain over immigration enforcement and a smaller infusion of wall funding, as well as a major rail project that pits Trump against his most powerful Democratic adversary, Senate Minority Leader Chuck Schumer, D-N.Y.

Monday's developments were described by congressional aides in both parties who spoke on condition of anonymity because the talks remain secretive.

All sides pressed toward an agreement by Monday night, which would pave the way for a House vote on Wednesday. Action is needed by midnight Friday to avert another government shutdown.

The bipartisan measure is loaded with political and policy victories for both parties. Republicans and Trump are winning a long-sought budget increase for the Pentagon, while Democrats obtain funding for infrastructure, the opioid crisis and a wide swath of domestic programs.

The bill would implement last month's budget agreement, providing 10 percent increases for the Pentagon and domestic agencies. Coupled with last year's tax cuts, it heralds the return of trillion-dollar budget deficits as soon as the budget year starting in October.

While most of the funding issues in the enormous measure have been sorted out, fights involving a number of policy "riders" — so named because they catch a ride on a difficult-to-stop spending bill — continued into the weekend.

As is typical, many or most of the policy riders were melting away.

For instance, an effort to add a plan to revive federal subsidies to stabilize the individual health insurance market and help the poor cover out-of-pocket costs under President Barack Obama's health law appeared to be failing. A complicated dispute involving abortion was at fault.

Sens. Lamar Alexander of Tennessee and Susan Collins of Maine spoke to Trump for an hour on Saturday in a call initiated by the two lawmakers, the sources said.

Alexander and Collins are among Republicans backing proposals to revive payments to insurers that Trump halted last fall that reimburse the carriers for reducing out-of-pocket costs for many low-earning customers. Those reductions are required by the Obama health law, and insurers have made up for the lost federal payments by boosting premiums.

They would also create a $30 billion, three-year reinsurance program that states could use to help insurers afford to cover their most seriously ill, expensive consumers.

Both proposals are in trouble because Democrats oppose GOP provisions that would forbid the federal payments from being used to help pay for insurance policies that provide abortion.

And Republicans appeared likely to fail in a bid to fix a glitch in the recent tax bill that subsidizes grain sales to cooperatives at the expense of for-profit grain companies, Democratic aides said.

Efforts to use the measure as a vehicle to extend protections for young immigrants under the Deferred Action for Childhood Arrival, or DACA, program appeared likely to fail, aides said. Trump killed the Obama-era program in September, but a court decision has essentially left it in place, for now. The White House had revived the idea in recent days — offering on Sunday a 30-month extension of DACA protections in exchange for $25 billion for Trump's border wall — but Democrats demanded protections for a broader pool of immigrants than had signed up for DACA, a request denied by GOP negotiators.

Chances for a behind-the-scenes effort to strengthen Capitol Hill procedures for dealing with workplace harassment complaints also appeared to be fading, aides in both parties said, casting responsibility on Senate Republicans for favoring a more narrowly drawn approach than legislation that passed the House last month.

Trump, meanwhile, has privately threatened to veto the whole package if a $900 million payment is made on the Hudson River Gateway Project, a priority for Schumer. Trump's opposition is alarming Northeastern Republicans such as Peter King, a House member from New York who lobbied Trump on the project at a St. Patrick's luncheon in the Capitol on Thursday.

The Gateway Project would add an $11 billion rail tunnel under the Hudson River to complement deteriorating, century-old tunnels that are at risk of closing in a few years. It enjoys bipartisan support among key Appropriations panel negotiators on the omnibus measure who want to get the expensive project on track while their coffers are flush with money.

Most House Republicans voted to kill the funding last year, however, preferring to see the money spread to a greater number of districts.

Schumer has kept a low profile, avoiding stoking a battle with the unpredictable Trump. One potential resolution is to include money for Gateway but not specifically earmark it for the project.

There's also a continuing battle over Trump's long-promised U.S.-Mexico border wall. While Trump traveled to California last week to inspect prototypes for the wall, what's pending now is $1.6 billion for earlier designs involving sections in Texas that double as levees and 14 miles (23 kilometers) of replacement fencing in San Diego.

It appears Democrats may be willing to accept wall funding, but they are battling hard against Trump's demands for big increases for immigration agents and detention beds they fear would enable wide-scale roundups of immigrants illegally living in the U.S.