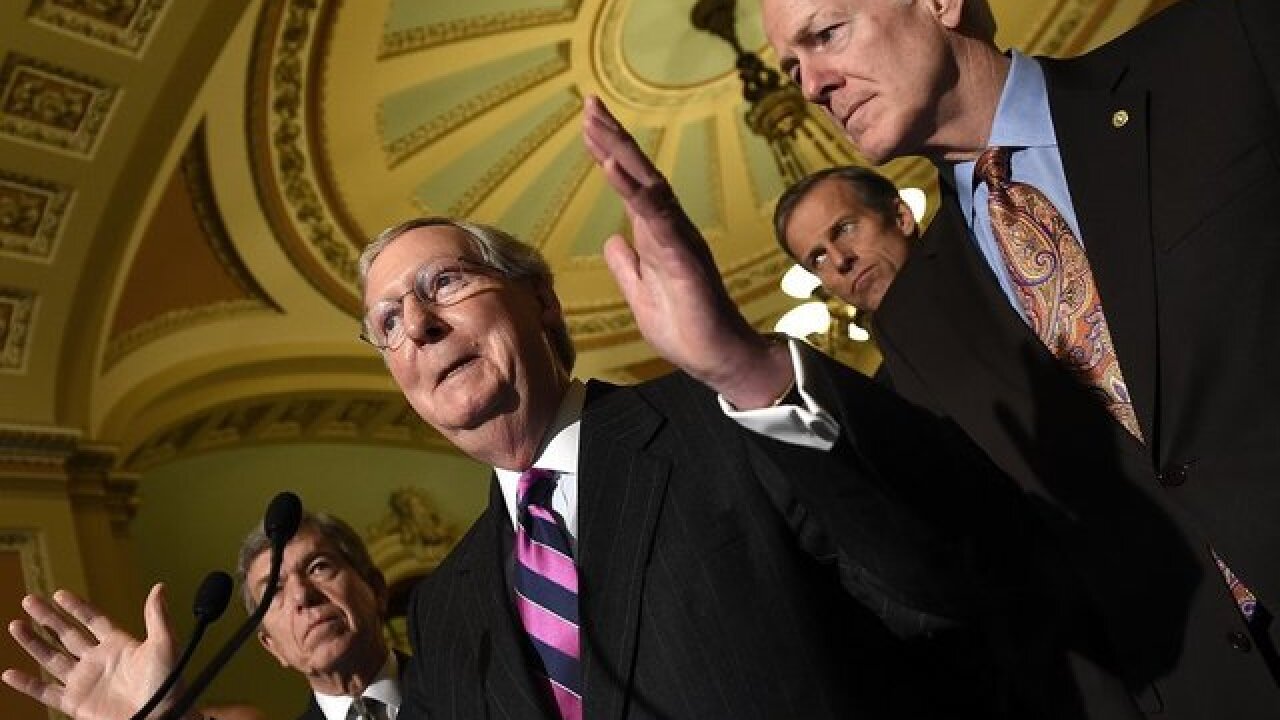 WASHINGTON (AP) — The Senate passed bipartisan legislation Wednesday designed to ease bank rules that were enacted to prevent a relapse of the 2008 financial crisis that caused millions of Americans to lose their jobs and homes.

The Senate voted 67-31 for a bill from Republican Senator Mike Crapo of Idaho that would dial back portions of the law known as Dodd-Frank.

Colorado Sens. Michael Bennet (D) and Cory Gardner (R) both voted in favor of the measure, which Bennet cosponsored in November.

“Since the 2008 financial crisis, we’ve implemented critical Wall Street reforms to reduce systemic risk, increase oversight of our banking system, and improve consumer protections. There’s been a lot of misinformation about what this legislation does and doesn’t do," Bennet said in a statement to Denver7. "In reality, it maintains these core protections, but also provides narrow relief for Colorado’s small financial institutions so they can extend credit to consumers, small businesses, and our rural communities.”

The legislation would increase the threshold at which banks are considered so big and plugged into the financial grid that if one were to fail it would cause major havoc. Those banks are subject to stricter capital and planning requirements. Lawmakers are intent on loosening the restraints on them in hopes that it will boost lending and the economy.

Republicans unanimously supported the bill, while Democrats splintered into two camps. One included several senators from rural states who worked out the compromise with Crapo. The other, led by Sens. Elizabeth Warren of Massachusetts and Sherrod Brown of Ohio, said the bill catered too much to the banks that contributed to the financial crisis and would increase the likelihood of future taxpayer bailouts.

"Big banks and their lobbyists are about to score a touchdown at the expense of hardworking families across the country," Brown said shortly before the vote.

The bill makes a fivefold increase, to $250 billion, in the level of assets at which banks are deemed to pose a potential threat if they failed. The change would ease regulations and oversight on more than two dozen financial companies, including BB&T Corp., SunTrust Banks, Fifth Third Bancorp and American Express.

Eventually, the exempted banks would no longer have to undergo an annual stress test conducted by the Federal Reserve. The test assesses whether a bank has enough of a capital buffer to survive an economic shock and continue lending. The banks also would be excused from submitting plans called "living wills" that spell out how a bank would sell off assets or be liquidated in the event of failure so that it wouldn't create chaos in the financial system.

Crapo, chairman of the Senate Committee on Banking, Housing and Urban Affairs, emphasized that the Federal Reserve would still have the authority to apply tougher standards for banks with between $100 billion and $250 billion in assets. "This bill, Mr. President, is a bill designed to protect community banks and credit unions, and that's why we have such bipartisan support for it."

Senate Majority Leader Mitch McConnell, R-Ky., said Dodd-Frank proved to be "too blunt" an instrument. He said it hurt smaller lenders who provide more than 50 percent of small business loans and more than 80 percent of agricultural loans.

Sen. Tom Carper, D-Del., said that while he had helped write some provisions of the Dodd-Frank legislation, he knew at the time it would have to be tweaked in the years ahead. He said the new bill is not designed to be an overhaul.

"If the banking bill before us today becomes law, 90 percent of Dodd-Frank would remain unchanged," Carper said.

In arguing against the bill, Brown noted that the Congressional Budget Office found that it would slightly increase the probability of a big bank failure, which would add to the deficit.

Other features of the bill would exempt certain banks and credit unions from requirements to report some mortgage loan data. That exempted data includes the age of a loan applicant, credit score, total loan costs and interest rate. Warren, an outspoken opponent of the change, said the bill would make it easier for banks to discriminate against minorities seeking home mortgages and go undetected.

In response to the Equifax breach that exposed personal information for more than 145 million Americans, the bill would require free credit freezes for all consumers affected by data breaches. Currently most states allow the credit reporting companies to charge consumers a fee for freezing their credit.

The House has already passed more a more expansive rollback of Dodd-Frank. Now, lawmakers will try to work out a compromise that both chambers can support. That may be difficult as negotiators try to appease GOP lawmakers without losing the support of the core group of Democratic senators who backed Crapo's legislation.

In all, 16 Democrats and one independent senator voted with Republicans on the bill, a rarity for major legislation.

"Many people are worried about the gridlock in Congress," Crapo said. "This bill shows that we can work together and can do big things that make a big difference in the lives of people across this country."