“I do not believe we need to hear from an 18th witness,” Gardner says. 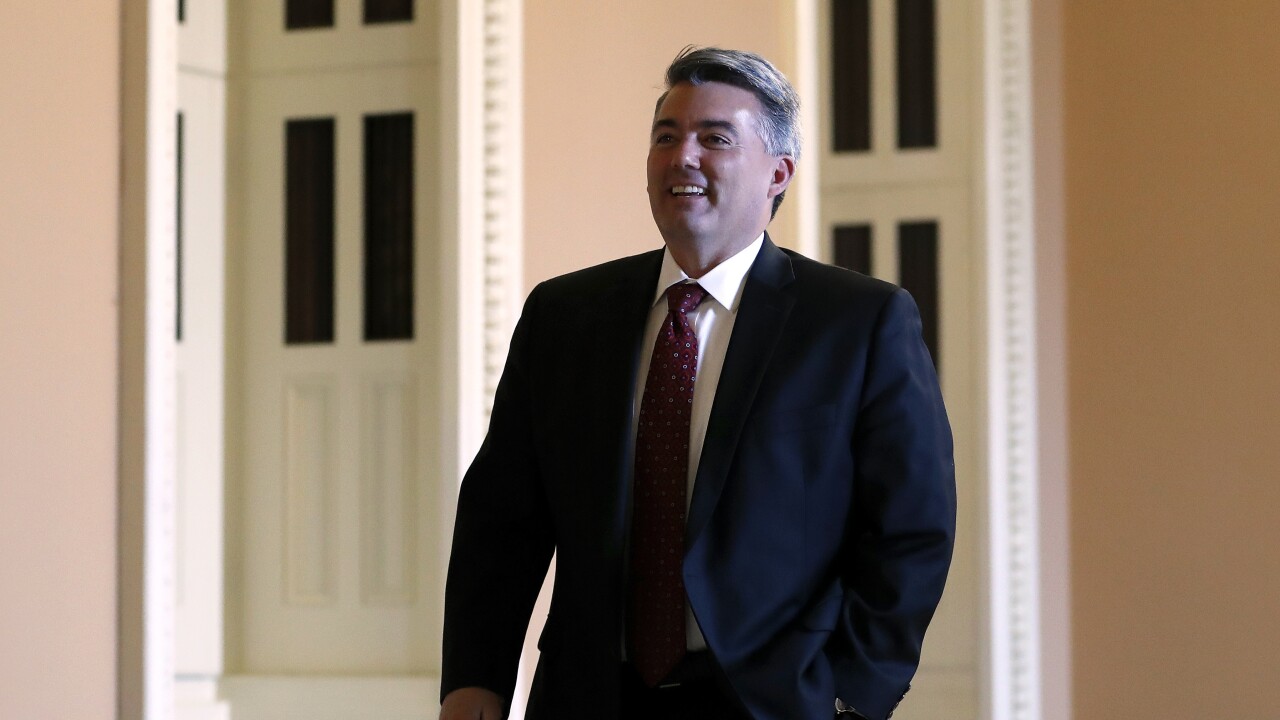 (Copyright 2020 The Associated Press. All rights reserved. This material may not be published, broadcast, rewritten or redistributed.)
Julio Cortez/AP
Sen. Cory Gardner, R-Colo., walks to the Senate chamber at the Capitol in Washington during the impeachment trial of President Donald Trump on charges of abuse of power and obstruction of Congress, Friday, Jan. 24, 2020. (AP Photo/Julio Cortez)

DENVER – U.S. Sen. Cory Gardner said Wednesday he does not need to hear from any new witnesses in the impeachment trial of President Donald Trump just minutes before senators got to the question phase of the trial.

“I do not believe we need to hear from an 18th witness,” Gardner, a Colorado Republican up for re-election this year, said in a statement. "I have approached every aspect of this grave constitutional duty with the respect and attention required by law, and have reached this decision after carefully weighing the House managers and defense arguments and closely reviewing the evidence from the House, which included well over 100 hours of testimony from 17 witnesses.”

Gardner’s statement came Wednesday morning a day after he reportedly said as much in a private meeting with Republican senators on Tuesday, the Wall Street Journal and Washington Post reported.

It also came just hours after Gardner’s Senate office said he was still “closely” reviewing the evidence presented to the Senate and focused on the question phase of the trial. Gardner’s campaign spokesman, Jerrod Dobkin, on Tuesday night worked to relay a message that Gardner was “concerned the longer this goes on and used as a political tool, the more it divides the country.”

But Colorado Politics first reported the news Wednesday that calling for witnesses was not something Gardner was considering any longer.

The vote on whether to call new witnesses and evidence, which is expected to occur on Friday, has become a primary facet of the impeachment trial. Many Republican senators said before the trial even started that they had already made up their mind that they would vote to acquit the president.

And former national security adviser John Bolton’s new book has put intense pressure on the senators as they consider whether to call new witnesses and subpoena new documents. CNN reported Wednesday that the White House was pressuring Bolton not to publish his book.

According to the New York Times, Bolton wrote in his book that President Trump told Bolton he wanted to keep $391 million in congressionally-approved military aid to Ukraine frozen until the new Ukrainian administration agreed to publicly say they would investigate Trump’s political rival, Joe Biden, and Biden’s son Hunter.

Several Republican senators up for re-election this year, and some others who are sometimes seen as moderates, have said they were more likely to support calling more witnesses after the information about Bolton’s book was reported. Gardner has been among those who were not saying one way or another how he might vote. Senate Majority Leader Mitch McConnell, R-Ky., said Tuesday he didn't yet have the votes to block new witnesses in the trial.

Democrats, including impeachment manager Rep. Jason Crow and Sen. Michael Bennet, have lambasted Republicans who say they do not want more evidence in the trial.

He added at the time that he hoped Gardner was “approaching this with an open mind.”

On Wednesday, Bennet tweeted: "A vote against witnesses is a vote against the American people and our democracy."

Crow said Monday in a call with Colorado reporters that he believed the news about Bolton’s book “underscores the need for Ambassador Bolton to testify” and said getting new information out in the open for consideration by the senators and the American people would be crucial.

“This can’t be the first impeachment trial in American history where there are no witnesses called and no document subpoenaed,” Crow said. “That needs to be done and people deserve nothing less.”

Six polls released during the impeachment trial show a majority of Americans – and often more than two-thirds of people polled – support having more witnesses called and more documents subpoenaed in the Senate trial.

At the onset of the trial, as the rules were being set, Republicans, including Gardner, voted down on party lines 11 amendments to the trial rules proposed by Senate Minority Leader Chuck Schumer, D-N.Y., that sought to subpoena documents being held by the Trump administration and several witnesses, like acting chief of staff and OMB director Mick Mulvaney and Bolton.

Bolton declined to testify in the House impeachment inquiry at the White House’s direction, and House Democrats withdrew their subpoena of Bolton out of fear the court case that would follow over whether he could testify would drag out the length of the inquiry.

Gardner has been seen as a key vote on whether the trial will continue past Friday. He and Trump have endorsed one another in their re-election bids this year and Gardner has supported most of the president’s initiatives. And Republicans who have crossed the president have been attacked by his campaign, himself at times, and his supporters.

But Trump is deeply unpopular in Colorado, according to polling, and Gardner has trailed in polling for this year’s Senate race despite having a war chest for the election. Former Gov. John Hickenlooper has led polling of Democratic candidates in the Senate primary, and Gardner trailed Hickenlooper by 11 percentage points in an October Keating Research-OnSight Public Affairs-Martin Campaigns (KOM) survey
of the race.

That same poll showed Trump’s popularity was 22 percentage points underwater – with 38% of Coloradans viewing him favorably and 60% viewing him unfavorably.

"The American people deserve to hear from firsthand witnesses," Hickenlooper tweeted Wednesday afternoon. "No one who is truly independent could possibly think otherwise. Colorado deserves better."

Gardner’s statement comes at the onset of questioning by the senators of the House impeachment managers and the president’s legal defense team. The senators will have 16 hours of questions over Wednesday and Thursday before votes on motions – and possibly on more witnesses and documents – would take place on Friday.