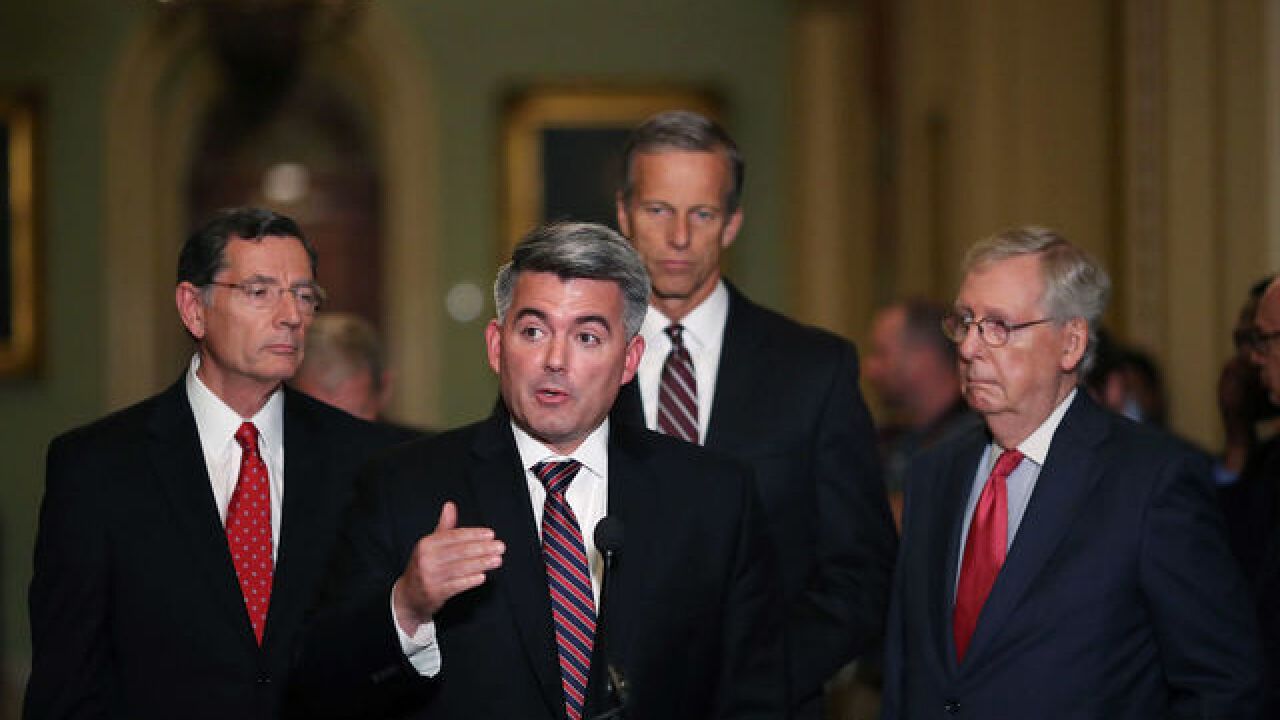 DENVER – Amid mounting pressure on Republican lawmakers to take a stance on the Trump administration’s policy of separating children from their parents if they entered the country illegally, U.S. Sen. Cory Gardner, R-Colo., and 11 other Republican lawmakers sent a letter to U.S. Attorney General Jeff Sessions and Homeland Security Secretary Kirstjen Nielsen Tuesday asking they stop the policy while Congress comes up with a solution.

“We support the administration’s efforts to enforce our immigration laws, but we cannot support implementation of a policy that results in the categorical forced separation of minor children from their parents,” the senators wrote in the letter. “We therefore ask you to work with the relevant Administration officials to stop the separation of families pursuant to the Department’s zero tolerance policy while Congress works out a solution that enables faster processing of individuals who enter our country illegally.”

Tuesday’s letter came after days of outrage over the separations, demands from Democratic lawmakers that a law be passed to stop the administration’s policy, and a lack of clarity from the administration itself over whether there even was a policy. Nielsen, for instance, on Sunday said there wasn’t a policy, but then defended it at the White House on Monday.

But the letter from the Republican lawmakers was—aside from Rep. Mike Coffman’s Monday comments—among the first times that Republican leaders in the Senate have with a full throat blamed the Trump administration for the policy.

“The current family separation crisis has multiple contributing causes, including court decisions that require release rather than detention of children but not parents who enter our country illegally,” Tuesday’s letter said. “But the immediate cause of the crisis is your Department’s recent institution of a ‘zero tolerance’ policy under which all adults who enter the United States illegally are referred for prosecution, regardless of whether they are accompanied by minor children.”

Among those who joined Gardner in signing the letter were Republican Sens. John McCain of Arizona, Orrin Hatch of Utah, Susan Collins of Maine, Lisa Murkowski of Alaska, Lamar Alexander of Tennessee and Bill Cassidy of Louisiana.

The letter also came a day after Colorado Gov. John Hickenlooper signed an executive order barring the use of state resources to separate immigrant children from their parents, and after Coffman and the state’s Democrats in Congress pledged to pass a law.

Gardner’s fellow senator from Colorado, Sen. Michael Bennet, D-Colo., signed on to a piece of legislation, the Keep Families Together Act, on June 8 when word of the separations started reaching Washington and the press. All of the Democratic senators have backed the measure. On Monday, he said that “every member of Congress must stand up for these children by demanding that the administration end its policy for now.”

A spokesperson for Gardner did not immediately respond to a question of whether Gardner would cosponsor the Keep Families Together Act on Tuesday.

But in a statement Monday, Coffman said he’d already reached out to the office of Sen. Dianne Feinstein and offered to introduce her bill in the House, saying he was “open to all reasonable options” and saying the separation policy was “antithetical to the America I grew up in.”

Rep. Jared Polis, D-Colo., said he’d signed on to the measure in the House on Tuesday, saying, “Let’s end this nightmare.” Rep. Diana DeGette, D-Colo., said Monday afternoon that she would be traveling with her colleagues to the border this week to witness the separations herself in addition to supporting the Keep Families Together Act. “I’ve long protested this heartless, shameful policy and am supporting legislation to reverse it,” she said in a statement.

“If the Trump administration is going to continue to choose to rip families apart, Congress must immediately pass stand-alone legislation prohibiting the practice of separating immigrant families,” Perlmutter said in a statement.

On Wednesday, Rep. Scott Tipton, R-Colo., said he doesn't support the separation policy in a series of tweets.

"I believe in border security & support a zero tolerance policy on illegal immigration, but I do not support separating children from their parents at the border. The Administration should take action to allow families to remain together while the parents' cases are decided (1/2)," Tipton tweeted. "I recently signed onto a letter w/ some of my colleagues to be sent to DHS, that expresses disapproval of the current policy of separating families & requests additional information on what is being done when a family arrives at the border in-between a legal port of entry (2/2)."

President Donald Trump met with House Republican leadership Tuesday afternoon amid a push to try and get immigration measures passed. Some opponents of Trump’s policy have said he is using the family separation policy to get an immigration bill passed.

Earlier this year, there was a push in the Senate to pass a comprehensive immigration reform plan. Gardner supported votes to get three different measures to the floor at the time, but all the measures ultimately failed to make it out of the Senate.

According to the website for Congress, the Senate version of the Keep Families Together Act had 48 cosponsors as of Tuesday. A news release from Polis’s office said he and 190 other members of Congress introduced the measure Tuesday in the House.