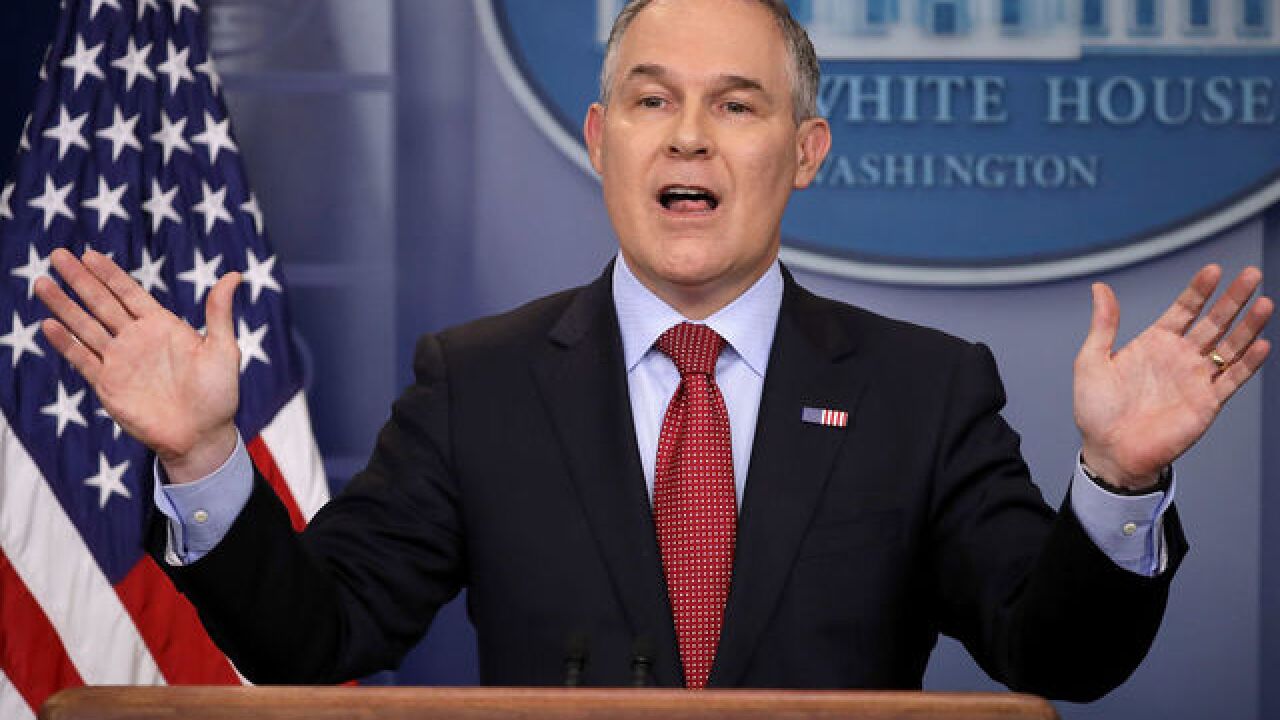 DENVER – Three Colorado Democrats in Congress are calling for Environmental Protection Agency Administrator Scott Pruitt to resign, or for the president to fire him, over a host of controversies as the White House continues to maintain his job is safe.

Earlier this week, Rep. Diana DeGette called for Pruitt's resignation in a tweet, and she has continued to scrutinize the EPA chief throughout the week.

"It’s time to #BootPruitt. @EPAScottPruitt should step down or be fired," she said in a tweet Wednesday. "From reckless spending to cozy relationships with industry to unusual personnel practices, he continues to undermine @EPA's mission and morale. It's time to restore integrity to the agency."

On Friday, U.S. Sen. Michael Bennet said Pruitt should resign “immediately” after the latest scandal: a report in the New York Times that Pruitt transferred a staffer who refused to turn on the motorcade’s emergency lights when Pruitt was late for a restaurant dinner.

And last year, Pruitt drew fire after he ordered a private plane from Denver to Durango and turned down an offer to ride on Gov. John Hickenlooper’s state plane on a trip to the Gold King Mine that also included Bennet and several other members of Congress from Colorado.

That was among several uses of private planes or first-class travel by Pruitt that have put him under fire in addition to the other scandals.

President Donald Trump met with Pruitt Friday, and Pruitt made his case to the president as to why he shouldn’t be fired.

But in addition to the calls from Bennet and several other members of Congress – including several Republicans – Rep. Ed Perlmutter, D-Colo., joined 63 other House Democrats Friday in writing a letter to President Trump asking that the president fire Pruitt should he not choose to resign.

“A man under numerous investigations both for ethical concerns and wasteful spending, who has actively moved to undermine environmental rules and regulations at industry request, is antithetical to the job of EPA Administrator,” their letter said. “Mr. Pruitt needs to go.”

The House members laid out five pages of reasons as to why they felt that was the case, including the recent scandals involving the dinner, the apartment, and his plane use. But they also said he was acting “counter” to the EPA’s mission of protecting the health and environment.

“Pruitt has taken efforts to weaken the agency of its scientific expertise. He has marginalized staff experts, refusing to meet with them, and actively worked to reduce the size of the agency,” the members wrote. “These moves, combined with draconian budget cuts, would shrink staffing levels to those of the Reagan administration, before Congress expanded EPA’s responsibilities under the 1990 Clean Air Act and other laws.”

They also said he had “intentionally censored or drummed up public confusion around climate science.”

The two other Democrat House members from Colorado, Jared Polis and Diana DeGette, did not sign the letter. However, aside from her earlier resignation call, DeGette sent a letter of her own Thursday to the EPA watchdog to investigate the scandals swirling around Pruitt.

"We have serious concerns that Mr. Pruitt may have misused his position as EPA Administrator to improperly enrich himself or his family members through this preferential and unique housing arrangement," the letter said.

White House Press Secretary Sarah Sanders demurred Friday when asked about Pruitt’s job, saying the White House was “continuing to review any of the concerns” they have, but warned against those asking about what she called “hypotheticals.”

“The president feels that the administrator has done a good job at EPA. He’s restored it back to its original purpose of protecting the environment,” she said.

Some members of the Congressional Western Caucus, which is primarily a group of Republican members of Congress from western states, issued statements in support of Pruitt Friday afternoon.

But though all four of Colorado’s Republican members of the House of Representatives are also members of the caucus, none of them provided statements to support Pruitt in a release sent by the caucus.

Rep. Paul Gosar, R-Ariz., who chairs the caucus, said: “EPA Administrator Pruitt has proven himself one of the most effective Cabinet Members in the Trump Administration.”