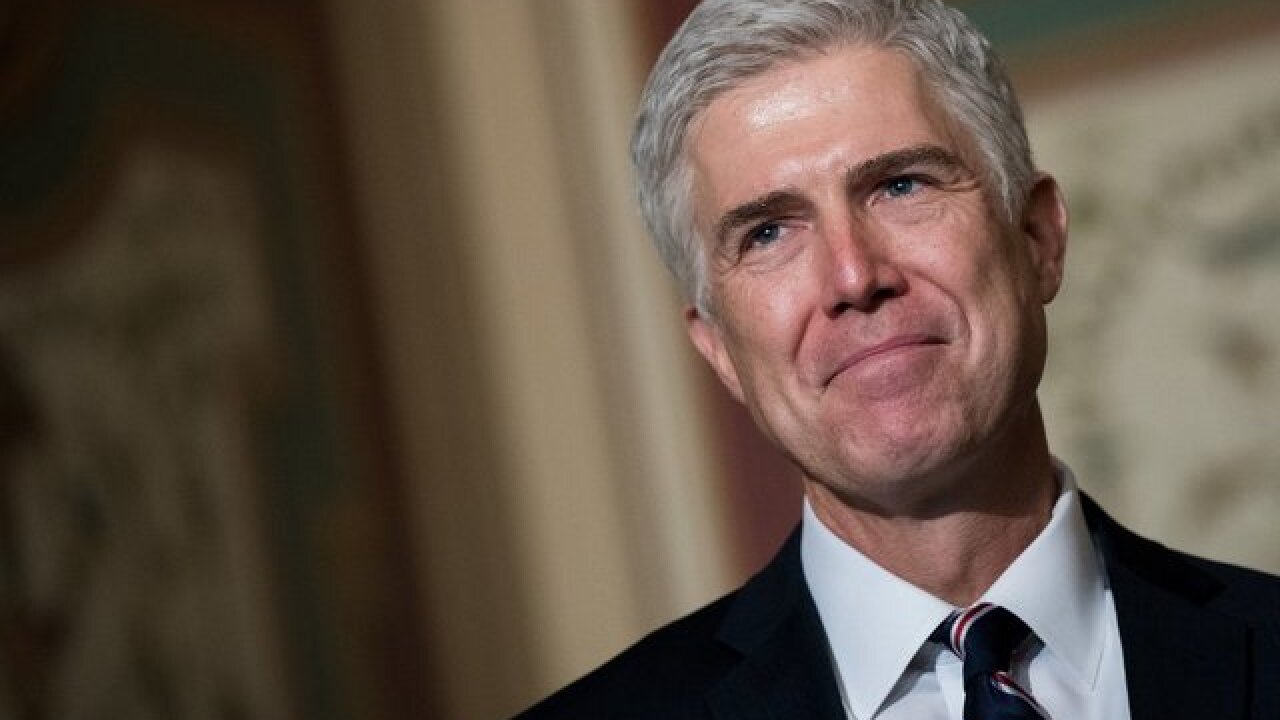 DENVER – A single person gave $28.5 million to a nonprofit whose "dark money" was eventually used to buy ads touting Colorado’s Neil Gorsuch for the U.S. Supreme Court seat he was eventually confirmed to, according to a new report from MapLight.

According to tax documents obtained from the Wellspring Committee, a Virginia nonprofit, the committee received more than $32 million in donations—much of the money anonymously donated because of the organization’s social welfare 501(c)(4) status.

The report says Wellspring had never received more than $13.2 million in a year before 2016, and that most of the $32 million came from one anonymous donor who shelled out $28.5 million.

Wellspring in turn donated $23 million to the Judicial Crisis Network, according to MapLight.

The Judicial Crisis Network—which was originally created as the “Judicial Confirmation network” to help confirm judiciary appointees of President George W. Bush’s, according to the Center for Responsive Politics—then spent at least $7 million in advertising against President Barack Obama’s appointment to the Supreme Court, Merrick Garland, according to MapLight and several other reports.

And shortly after President Donald Trump named Gorsuch as his pick for the Supreme Court in January, the Judicial Crisis Network launched a website called ConfirmGorsuch.com touting Gorsuch’s credentials, and said it would spend $10 million on advertising and lobbyists to get Gorsuch confirmed, according to the Center for Responsive Politics.

Reporting from MapLight and the Center for Responsive Politics shows that the Wellspring Committee and Judicial Crisis Network are linked by Ann and Neil Corkery, who have both had top positions within one of the organizations, or both, in the past.

The Daily Beast reported in March that Wellspring has in the past had ties to the Koch Brothers, and that the Corkerys have drawn salaries from numerous other conservative groups.

The Judicial Crisis Network, when confronted publicly by Senate Minority Leader Chuck Schumer and other Democrats about their tactics involving the Supreme Court nominee, issued a press release in March saying the Democrats were “behaving like third-world strongmen whose approach to public policy is to bully and intimidate people with whom they disagree.”

“We will continue to support the confirmation of exceptionally qualified nominees like Neil Gorsuch, who enjoy a broad base of bipartisan support because of their commitment to putting the law ahead of any political agenda,” the release added.

The release came a week after Gorsuch was probed by the Senate Judiciary Committee as part of his confirmation process. In the hearing, Sen. Sheldon Whitehouse, D-R.I., asked about the dark money groups that were spending money on trying to get him confirmed, specifically naming Philip Anschutz, whom Gorsuch represented while working as a Washington lawyer and who also worked to get Gorsuch nominated to the 10th Circuit Court of Appeals, according to the New York Times.

When Whitehouse asked Gorsuch if Anschutz was one of the donors, Gorsuch said, “You’d have to ask them,” referring to the spending groups like the Judicial Crisis Network, according to a report from Slate.

“I can’t because I don’t know who they are,” Whitehouse retorted. “It’s just a front group.”

According to MapLight’s report, Wellspring spent elsewhere as well, as did the Judicial Crisis Network, which reportedly gave millions in grant money to various organizations that included the Republican Governors Association, the Republican Attorneys General Association, and Sen. Marco Rubio’s presidential and Senate campaigns.

Gorsuch is worth at least between $3.2 million and $7.25 million, according to money he reported in 2015, and made most of his money before he was appointed to the federal bench.

He also faced questions earlier this year when he gave a speech to a conservative education nonprofit at Trump International Hotel in Washington. Though organizers said politics had nothing to do with his appearance at the president’s hotel, Schumer said the appearance was “everything that was wrong with his nomination.”