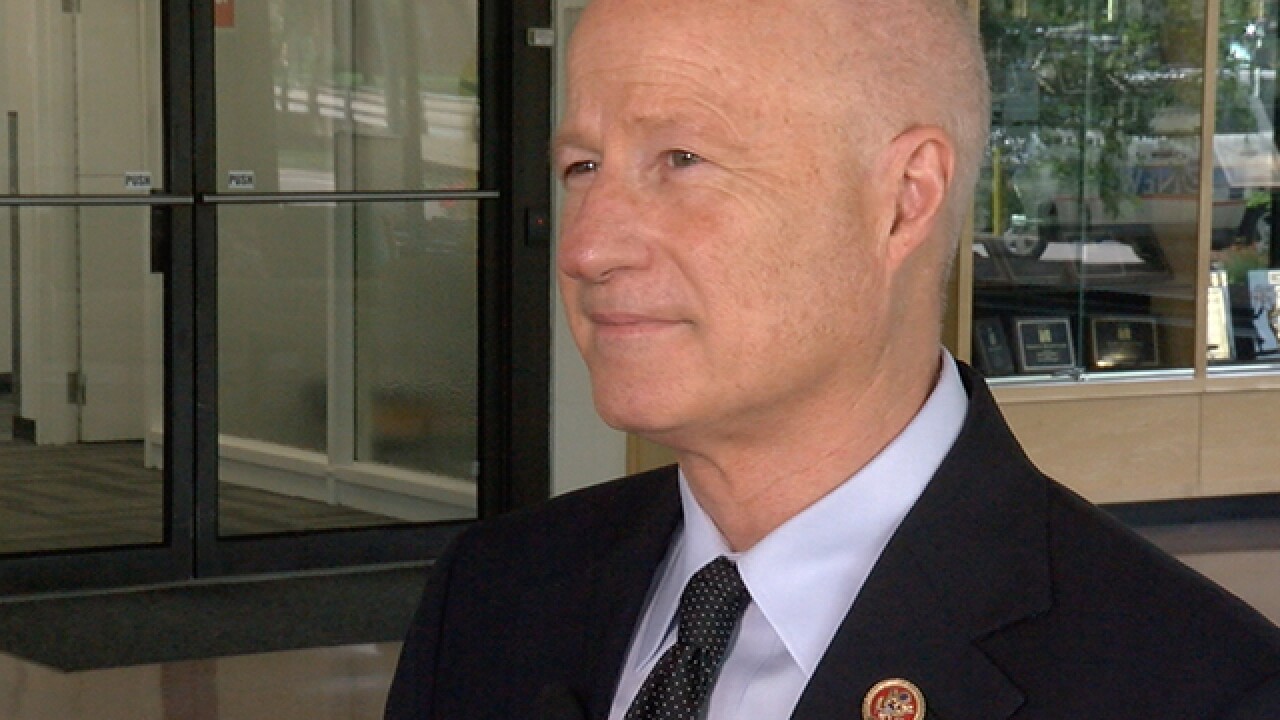 The five-term Republican congressman from Aurora also criticized President Donald Trump’s meeting this week with Russian President Vladimir Putin in an interview with Denver7 ahead of Saturday’s hospital ceremony.

“I think from the good standpoint, this is a facility with state-of-the-art equipment that will give our veterans, the men and women who have served this country, the state-of-the-art health care that they’ve earned through their military service,” Coffman said.

But he was critical, as he has been for years, of the five extra years of construction it took to finish the hospital and the $1.7 billion cost, which came in more than $1 billion over budget.

“I guess one more positive thing is that all of the effort to strip the VA of all of their construction authority so they can never build a hospital again on their own,” Coffman said. “And on this facility, I led the effort to bring the Army Corps of Engineers to take it over. And I think without that, we would not be celebrating an opening tomorrow.”

But there have been additional costs to get all the equipment into the facility and worries about room shortages and understaffing in recent months.

Most of the outpatients from the Denver facility will start going to the new Aurora facility at the end of the month, and inpatients will be moved a week later. The hospital’s director says there are 60 transition teams working on the move.

But a brand-new spinal cord injury unit won’t open until later this year at the earlier, and most PTSD patients will continue being treated at the Denver campus.

Coffman called the staffing levels a “challenge” and said that it might be tough to address with the labor shortage in Colorado.

“But what we have in terms of our ability to augment that care at the hospital are providers that can be reimbursed by the Veterans administration,” Coffman said.

While some veterans have said in recent weeks that they feel left in the dark about the move, others said they were glad the new hospital was finally opening. Coffman said Friday he’s heard the same.

“I think there’s relief that it’s finally opening,” he said. “I think that it’s been so long in the making, they’re obviously disappointed with how long it’s taken to build a hospital—disappointed with the cost overruns and the criticisms involved against the VA for that. But I think that they take pride and they see this as their hospital.”

The VA hospital’s ribbon-cutting ceremony will come two days before the Senate votes whether or not to confirm new VA secretary nominee Robert Wilkie, whom Coffman said he’s spoken briefly with and approves of.

"I think he’s good. We’ve had a short conversation with the promise to be able to have a sit-down after he finishes the Senate confirmation,” Coffman said.

He said he would continue to demand that the secretary “clean house” at the VA and get rid of problemed senior staffers.

“If you don’t clean house, it doesn’t matter what you say or do. You’re not going to change the bureaucratic culture of the VA,” he said.

And he said that he believes his work on VA issues will benefit him in his November race against Democrat Jason Crow, a fellow veteran.

“I think certainly my leadership on veterans issues will be important, as will my work on Armed Services issues, as someone who served 21 years in the military,” Coffman said.

“We have to make sure we are prioritizing hiring staff within the VA and we are funding the VA appropriately so they can hire the people that provide those services and get that information out,” Crow said in an interview Friday.

Coffman also doubled down on his comments criticizing President Trump’s meeting with Putin earlier this week.

“I think the president dramatically underestimates the threat that Russia poses to the security interests in the United States,” he told Denver7 Friday. Coffman said he was “disturbed” that Trump met with Putin alone and said he didn’t support Trump’s floating the idea of bringing Putin to the White House later this year.

“He has a great national security team around him, and if he’s going to meet with Mr. Putin, he has to have those people in the room with him,” Coffman said. “He cannot do another meeting alone with Mr. Putin, assuming there is a value in having a meeting. I think the actions of Russia are destabilizing not only to the interests of the United States, but globally.”

Coffman said the rhetoric from the president hasn’t always matched the administration’s actual actions, which he called “sort of confusing.” He said he would be watching the administration’s actions in regards to remaining committed to NATO, checking Russia’s military expansion and election interference, and making sure sanctions are kept in place.

He said all levels of the U.S. government are focused on protecting the 2018 elections but acknowledged that there are always attempts by other countries to influence elections. Still, he said, Americans need to pay attention to the outside influence others have had.

“I think that what the American people have to understand is the mere fact that Americans have become less confident in the political process is a victory for the Russians,” he said. “I think we will not be surprised this time and we will be monitoring it very, very, very closely to see if the Russians involve themselves in our election processes.”