Pressure mounts on Hickenlooper, but Senate is no sure bet 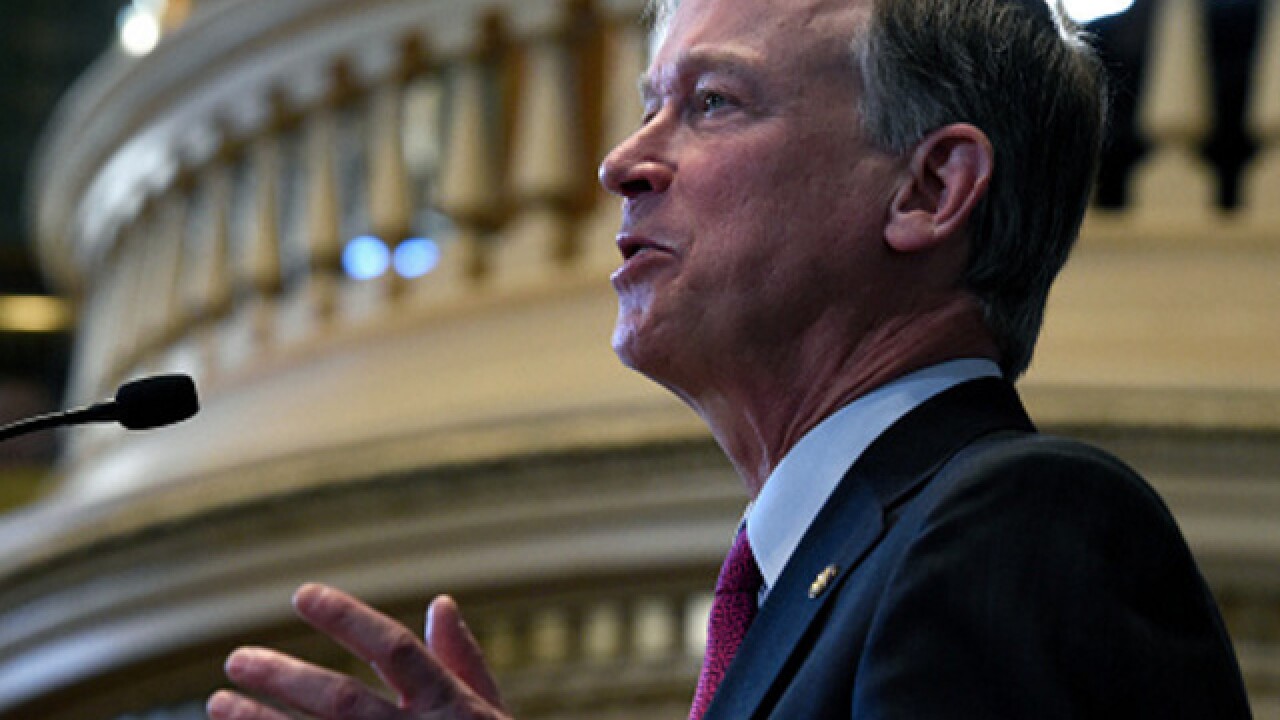 SIOUX CITY, Iowa (AP) — As his campaign cash dwindles and he continues to scrape the bottom in polls, pressure is mounting on former Colorado Gov. John Hickenlooper to trade in his faltering presidential bid for a U.S. Senate run in his home state.

But the decision will not be an easy one for the 67-year-old. Hickenlooper was generally uninterested in the ins-and-outs of legislative horse-trading in Colorado and has repeatedly said he's more motivated by being an executive. A successful run for the Senate would also take him out of the mix for potential Cabinet appointments should Democrats win the White House next year.

And if Hickenlooper bails on the jam-packed presidential primary, he'll just be trading one crowded Democratic contest for another. Ten Democrats have already filed to run against Republican Sen. Cory Gardner in Colorado, and some have raised as much or more money in the past quarter for their bids as Hickenlooper has in his presidential effort. Political analysts say that while Hickenlooper likely has the stature to still dominate the field, he'd be less of a sure thing than he would have before he launched his White House bid in March.

On Thursday, Hickenlooper insisted his focus was on the presidential race.

Still, plenty of people in Washington and Colorado are thinking about the Senate. Members of Hickenlooper's own staff implored him to make the switch in late May, and when he stayed in the White House race, several left the campaign. Hickenlooper pinned his hopes on a strong performance in the second debate reviving interest in his campaign.

But after another lackluster debate performance last week, a former Hickenlooper strategist in Colorado, Curtis Hubbard, registered several internet domains, including "Hickenlooper4Senate.com," in the hopes of getting Hickenlooper to change targets.

"John Hickenlooper remains incredibly popular with Colorado voters," said Hubbard, adding that he hasn't talked to Hickenlooper since January. He contended Hickenlooper would become "an instant front-runner in one of the nation's most closely-watched Senate races."

Next came reports that Hickenlooper met with the top Senate Democrat, Chuck Schumer, in New York after last week's debate. Campaign spokesman Peter Cunningham said it was just one of a series of conversations Hickenlooper has had with Schumer since initially turning down the New York senator last year.

Hickenlooper said Thursday he'd spoken with Schumer "four months ago and we did talk recently," but wouldn't elaborate.

The main pressure on Hickenlooper is not necessarily time. Colorado's Senate primary is in June 2020, and Democrats and Republicans agree the former governor could enter late and still be the favorite.

"I don't see what the hurry is other than that Schumer's getting antsy," said veteran Colorado Democratic strategist Ted Trimpa.

In recent weeks, Hickenlooper has softened his denials about the Senate bid. In a June appearance in Washington, he said, "If the Senate is so good, how come all those senators want to get out?" This past Sunday, the former governor, after prodding, told SiriusXM, "I've never ruled out anything."

The reality is Hickenlooper may not be able to sustain a full presidential bid for much longer. He had only $836,000 in campaign cash left on June 30 and is expected to run out of money soon.

That makes Hickenlooper's situation more acute than two other presidential hopefuls Schumer has also unsuccessfully wooed for Senate bids, Montana Gov. Steve Bullock and former Rep. Beto O'Rourke of Texas. Bullock entered the race later than Hickenlooper, and while his bid is also a longshot, he's had less time to burn scarce campaign dollars. He reported $1.5 million in cash as of June 30. O'Rourke had a disappointing second quarter of fundraising, but unlike the two governors, he has already qualified for the September debates thanks to the national profile and donor base he built during his unsuccessful 2018 Senate campaign.

Texas and Montana are also much tougher Democratic targets than Colorado. While Gardner is widely recognized as a strong political talent and fundraiser, Colorado is treacherous terrain for a Republican. Gardner won the state by less than 2 percentage points in 2014. Hillary Clinton won it by 5 points in 2016 and Democrats swept all statewide races last year, winning the governor's office by 11 percentage points.

"There's something about a Winnebago," he added. "It could be a title for a movie."