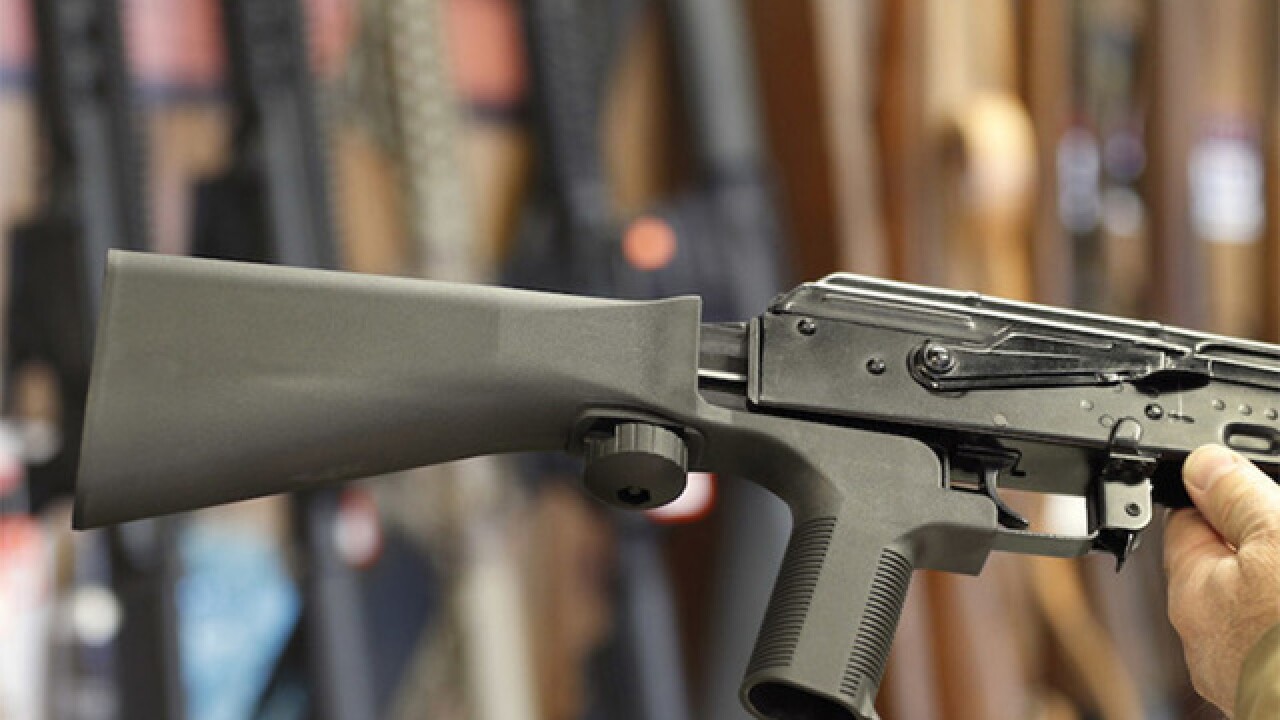 DENVER – President Donald Trump announced Tuesday that he’d ordered the U.S. attorney general to propose regulations to outlaw some devices, like bump stocks, under current law in response to a wake of mass shootings.

Trump specifically cited the Las Vegas shooting, in which 58 people were killed and hundreds were wounded when a man using semi-automatic rifles modified with bump stocks, as reasoning behind the proposed ban.

He said that he’d ordered Attorney General Jeff Sessions in December to “clarify whether certain bump stock devices, like the one used in Las Vegas, are illegal under current law” while at an event Tuesday.

Further, he said, he on Tuesday signed a memo ordering Sessions “to propose regulations to ban all devices that turn legal weapons into machine guns.” And he pressured Sessions to act soon.

“I expect that these critical regulations will be finalized, Jeff, very soon,” Trump added. The memo was released shortly after Trump's comments.

The Justice Department said in a statement after the president's comments: "The Department understands this is a priority for the President and has acted quickly to move through the rulemaking process. We look forward to the results of that process as soon as it is duly completed."

His announcement comes amid high pressure after a school shooting in Florida left 17 people, most children, dead last week. There has been a push, led by young people from Florida, to force Congress and the White House into action after another deadly shooting.

Several places around the country banned bump stocks in the wake of the Las Vegas massacre, including Denver, whose ban went into effect in recent days.

The city already had a ban on so-called assault weapons, which include semi-automatic rifles with magazine capacities of 21+ rounds and semi-auto shotguns with either a folding stock or six-round magazine capacity.

But the latest revision to the city’s municipal code makes it “illegal to sell, carry, store, or otherwise possess” a bump stock in Denver. Police are asking any owners to turn their bump stocks in at police stations. Not doing so could lead to fines between $100 and $999 or between 10 and 180 days in jail.

Boulder City Council member Jill Adler Grano said Tuesday that she would be asking her colleagues at Tuesday’s meeting to pursue bans on bump stocks, high-capacity magazines and assault weapons and said she hoped for a special session to “dive more deeply into these proposed bans.”

In the state legislature, Sen. Michael Merrifield, D-Colorado Springs, has also introduced a bill that would include bump stocks in the state definition of a “dangerous weapon” and make possessing one a class 5 felony for the first offense, then a class 4 felony for each following offense.

If approved, Merrifield’s proposal would also apply the same class of penalties to people who sold bump stocks to another person in Colorado.

The measure is set for its first committee hearing on Feb. 26 in the Senate State, Veterans, & Military Affairs committee, which Republicans hold in a 3-2 majority. Even if it were to make it past the committee, Senate President Kevin Grantham told The Denver Post that the proposal wouldn’t “save a single soul” and infringed on people’s Second Amendment rights.

In both the U.S. House and Senate, the Automatic Gunfire Prevention Act, which also bans bump stocks, has backing from nearly 200 Democratic members of the House and over 40 Democratic senators, but zero Republicans. There are other proposals in Congress as well.

The White House has indicated in recent days that Trump would be meeting with state and local officials in coming days, and with teachers and students on Wednesday, to talk about more ways to curb gun violence in schools.