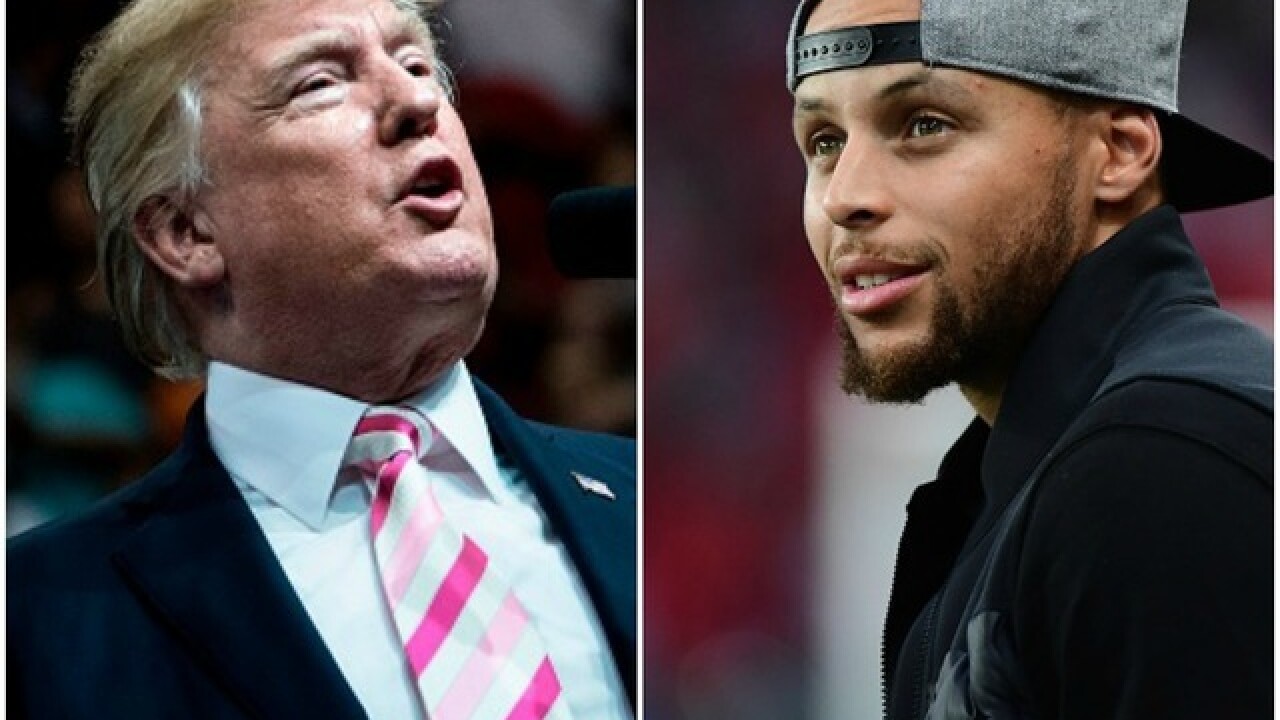 SOMERSET, N.J. (AP) — Stephen Curry and President Donald Trump agree on one thing: The Golden State star is not going to the White House anytime soon.

Trump tweeted Saturday that Curry is no longer invited to the White House because of what the president called hesitation by the two-time NBA MVP in deciding whether to make the traditional champions’ trip to Washington. Trump’s comment on Curry came one day after the president told NFL owners to fire players who won’t stand for the national anthem.

It was not immediately clear whether Trump was rescinding the invitation for Curry or the entire team.

Going to the White House is considered a great honor for a championship team.Stephen Curry is hesitating,therefore invitation is withdrawn!

The Warriors, who hold their first practice of the season Saturday, had not made a collective decision whether to go to the White House in celebration of last season’s title. Curry has said he did not want to make such a visit.

The Warriors were expected to comment further later Saturday after their opening practice. Other athletes weighed in quickly, including LeBron James of the Cleveland Cavaliers.

U bum @StephenCurry30 already said he ain't going! So therefore ain't no invite. Going to White House was a great honor until you showed up!

For Trump, it was the NFL one day, the NBA the next.

At a rally in Alabama on Friday night, Trump said NFL players who refused to stand for “The Star-Spangled Banner” are exhibiting a “total disrespect of our heritage.” Several NFL players, starting last season with then-San Francisco quarterback Colin Kaepernick, have either knelt, sat or raised fists during the anthem to protest police treatment of blacks and social injustice.

“That’s a total disrespect of everything that we stand for,” Trump said, encouraging owners to act. He added, “Wouldn’t you love to see one of these NFL owners, when somebody disrespects our flag, you’d say, ’Get that son of a bitch off the field right now. Out! He’s fired.”

“Divisive comments like these demonstrate an unfortunate lack of respect for the NFL, our great game and all of our players, and a failure to understand the overwhelming force for good our clubs and players represent in our communities,” Goodell said in a statement.

Seattle Seahawks star Richard Sherman said the president’s behavior is “unacceptable and needs to be addressed.”

“If you do not condemn this divisive rhetoric you are condoning it!!” Sherman tweeted.

Trump also bemoaned what he called a decline in violence in football, noting that it’s “not the same game” because players are now either penalized or thrown out of games for aggressive tackles.

“No man or woman should ever have to choose a job that forces them to surrender their rights,” DeMaurice Smith, the NFL Players Association executive director, said Saturday. “No worker nor any athlete, professional or not, should be forced to become less than human when it comes to protecting their basic health and safety.”

The NBA did not immediately react to Trump’s tweet about Curry. NBA Commissioner Adam Silver told The Players’ Tribune in July he believes teams should visit the White House when invited, though also said he would not order anyone to make such a trip.

“I think that these institutions are bigger than any individual politician, any individual elected official,” Silver said then. “And it concerns me that something like going to the White House after winning a championship, something that has been a great tradition, would become one that is partisan. I will say, though, even though I think that teams should make decisions as organizations, that I would also respect an individual player’s decision not to go.”

Trump has met with some teams already in his first year in office.

Clemson visited the White House this year after winning the College Football Playoff, some members of the New England Patriots went after the Super Bowl victory and the Chicago Cubs went to the Oval Office in June to commemorate their World Series title. The Cubs also had the larger and more traditional visit with President Barack Obama in January, four days before the Trump inauguration.

And if the Warriors don’t want to meet with Trump, they may still get a welcome in Washington: House Democratic leader Nancy Pelosi of California has said she would like to bring the team to the Capitol.