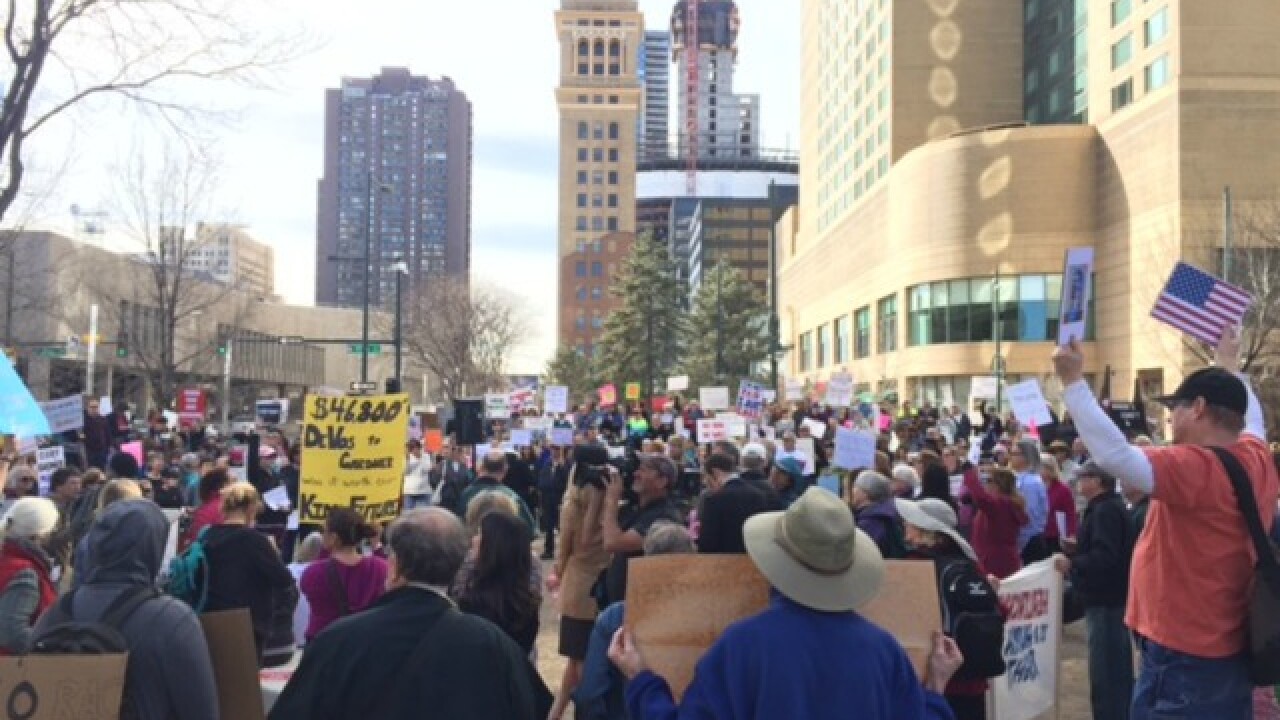 WASHINGTON – Colorado’s two senators split their votes, just as the rest of their Senate colleagues did, in Education Secretary Betsy DeVos’ confirmation hearing.

Vice President Mike Pence cast the deciding vote to confirm the controversial DeVos after the Senate’s vote ended in a 50-50 split.

DeVos faced the toughest challenge to appointment so far as the new administration builds its cabinet. She is a vocal proponent of school choice who has drawn praise from Republicans and the ire of Democrats for her support of charter schools, voucher systems and the privatization of some public schools.

People across the country had flooded their senators’ phone lines and email inboxes for weeks to urge them not to confirm DeVos.

Bennet, a former Denver Public Schools superintendent, had adamantly opposed her confirmation and took the Senate floor during a 24-hour attempt Monday and Tuesday to convince a single Republican not to vote for DeVos.

“Ms. DeVos has shown no evidence of her commitment to be the torchbearer for both excellence and equity,” Bennet said Monday. “Her ideology and dogmatic approach conveys a lack of understanding and appreciation of the challenges we face and the depths of solutions they demand.”

Two Republicans, Sens. Lisa Murkowski, of Alaska, and Susan Collins, of Maine, said last week they wouldn’t vote for DeVos and carried through with their vows in Tuesday’s vote. But Democrats were unable to flip another vote, leading to Pence being the final decider.

Alabama Sen. Jeff Sessions, who is set to be confirmed by the Senate Wednesday, cast what will likely be his final vote in the Senate to bring the “yeas” to 50 and induce Pence’s tiebreaker.

And though many Coloradans had focused on trying to flip Gardner’s vote, it didn’t happen. Gardner said in a statement following his vote that DeVos had convinced him she was the right person for the job and would “be an advocate for public schools.”

“When I had the opportunity to meet Betsy DeVos personally, she pledged to me that she would be an advocate for public schools, teachers and educational opportunity for all. The debate around her nomination has been a healthy exercise of our democracy, made all the more important because it involves our most precious possession, our children,” his statement read. “As someone who believes education decisions should be left to parents and their children with policy driven locally, Congress will hold her accountable and I will work to ensure she lives up to the commitment she made to me. “

But some had been extra critical of Gardner because of the amount of money he received from DeVos in campaign contributions. She and her husband are both wealthy donors, mostly to Republicans, and donated around $900,000 in past campaign cycles to nearly two dozen of the senators who voted for her Tuesday.

Gardner himself was criticized for taking at least $46,000 from her in his 2014 Senate campaign. But Murkowski had also received more than $40,000 from DeVos in the past and voted against her.

Gardner was also under fire for having voted for every nominee President Donald Trump has put forth for his cabinet thus far. Bennet has voted in favor of less than half of them, according to FiveThirtyEight.

Still, some Coloradans were angry with Gardner’s vote in favor of DeVos and took to his Denver office to protest, and comments on his social media account and others far outnumbered those in support of his vote. There were nearly 2,000 responses to his Twitter post that contained his full statement on the vote.

My full statement on Betsy DeVos's confirmation below. I will continue to advocate for public schools & educational opportunity for all. pic.twitter.com/gOCjAHWQEn

“Time to hold certain senators responsible, such as Colorado’s Cory Gardner,” wrote Renee Curry on Facebook. “He found it more important to support the pay-to-play game than the wishes of the voters.”

“Cory Gardner refused to listen to his constituents, it’s time for him to go,” wrote Christine Gibbons.

“As an independent voter, I voted for Cory Gardner in the last election,” wrote Barbara Marchetti. “Be assured that he will never see my vote again.”

But not all were displeased.

“Great news,” said Raymond Pittman. “Maybe a successful business person, not an educator with their best interest in mind, will get rid of the tenured trash and start giving our kids a better education.”

“Yes!” wrote Brian Saunier. “Send education…back to where it belongs – to the states.”

Still others supported the notion, as Gardner did in early January when he first met with her, that DeVos may roll back Common Core initiatives.