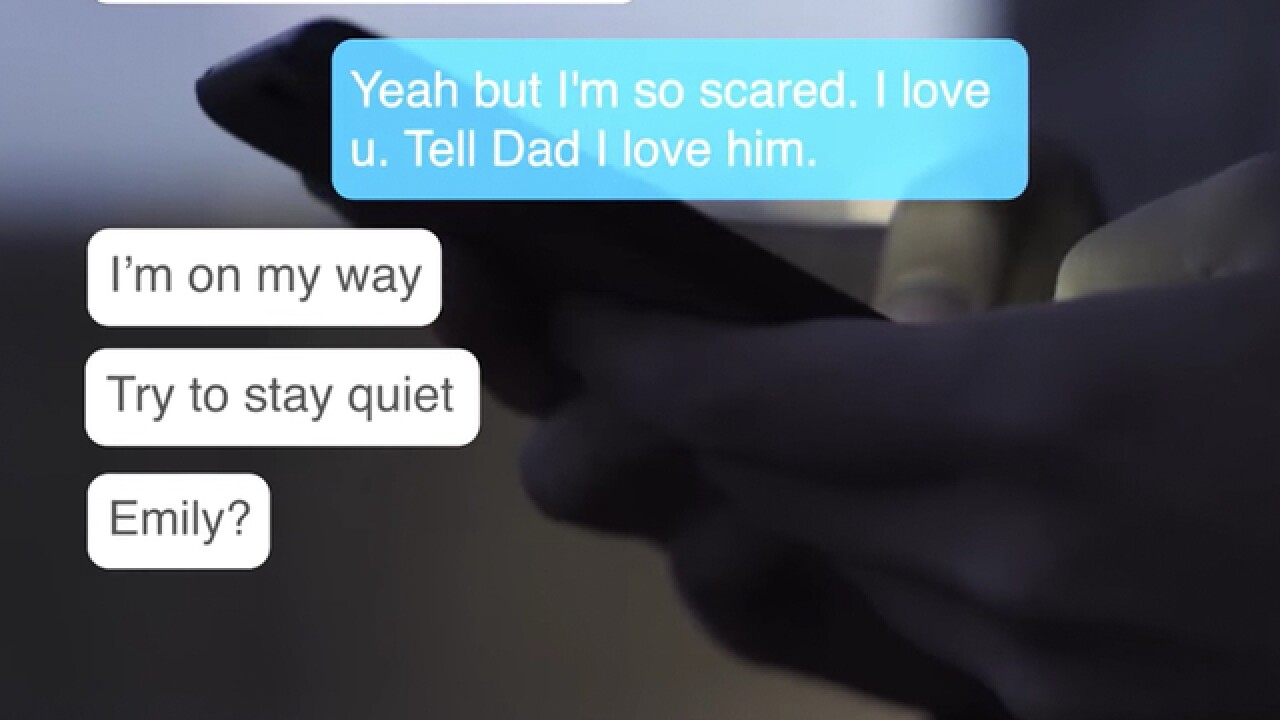 Giffords PAC
<p>The Giffords PAC ad features a fictional text conversation between a girl named Emily and her mother in a scenario in which the girl is experiencing a lockdown at her school. The parents of Emily Keyes said Wednesday that the super PAC behind an ad that depicted text messages similar to those sent during the final moments of her life had apologized, and said they believe the similarities were unintentional. (Image screenshot of ad by Giffords PAC)</p>

DENVER – The parents of Emily Keyes said Wednesday that the super PAC behind an ad that depicted text messages similar to those sent during the final moments of her life had apologized, and said they believe the similarities were unintentional.

John-Michael Keyes and Ellen Keyes on Wednesday issued a new statement to some Colorado reporters, including this one, in which they said they learned about the Giffords PAC advertisement Tuesday.

The PAC, founded by former Arizona Congresswoman Gabrielle Giffords, posted the ad on Sept. 23 and said it put nearly $1.5 million behind the ad campaign to air in Colorado’s 6th congressional district, where the incumbent Coffman faces Democrat Jason Crow.

The ad featured a fictional text conversation between a girl named Emily and her mother in a scenario in which the girl is experiencing a lockdown at her school.

“Someone has a gun and they can’t find him,” the girl writes.

“Yeah but I’m so scared. I love u. Tell Dad I love him,” the girl responds.

The fictional mother tells her daughter to “try to stay quiet” before her daughter stops responding. “Emily? … Emily I love you so much,” the mother responds.

The advertisement then goes on to attack Coffman for the amount of money he has received from the National Rifle Association (NRA) during his time in Congress and his “A” rating from the organization.

The original ad was still up on the PAC's YouTube page as of early Wednesday afternoon but was removed shortly before this story was published. The replacement ad, which does not contain the name "Emily" anymore, now uses the phrase "Sweetie?" instead.

Many people, including Coffman’s campaign and the Keyes family, pointed out what they saw as similarities between the conversation involving the fictional mother and daughter in the ad and the real messages Emily Keyes, 16, exchanged with her parents before she was killed in a shooting at Platte Canyon High School in 2006.

As she and six other girls were being held hostage, she texted her parents: “I love u guys.”

John-Michael and Ellen Keyes created the “I Love U Guys” foundation in January 2009 and worked to develop the Standard Response Protocol, which has since been implemented in thousands of schools across Colorado and the U.S.

“I respect Gabby Giffords, but exploiting the name and horrible death of one of our own to try to win an election is beneath basic human dignity,” Coffman’s campaign account tweeted Tuesday. He called for the ad to be taken down.

John-Michael Keyes initially told 9News he was considering legal action if the ad was not pulled, after which a Giffords PAC spokesperson told The Denver Post that the PAC would be amending the ad and removing the name “Emily” to make it “clear that it is not connected to any one incident.”

A spokesperson for the PAC did not immediately respond to Denver7’s request for comment Wednesday morning.

But John-Michael and Ellen Keyes said in a statement the PAC had spoken with them and that they were satisfied with the committee’s response.

“Our initial response was profound disappointment…. The Giffords organization reached out to us directly to offer both their regret and apologies,” the Keyes said in a statement to Denver7. “They assured us that the similarities were coincidental and they would be altering the advertisement and reposting a new version on social media and other internet sites. We believe that any connection to the tragedy our family experienced was unintentional.”

“We respect the ability to exercise a political voice and we understand that mistakes happen,” they added. “We appreciate the prompt attention paid by the Giffords organization and their commitment to remedy the situation.”

Giffords PAC put out another new ad Wednesday in which it attempts to further hammer home to Coloradans the ties between the NRA and Coffman by using a brief clip of a news report on the Aurora theater shooting. Giffords and her husband, former astronaut Mark Kelly, endorsed Crow last year, and Crow’s campaign says he’s worked with Giffords on several gun-related measures.

The district is the most hotly-contested congressional race in Colorado this year. A recent New York Times Upshot/Siena College poll put Crow up by 11 points over Coffman; FiveThirtyEight says Crow has a 4 in 5 chance of winning; and the Cook Political Report on Wednesday shifted its forecast in the district to “Lean Democrat.”

Both campaigns and committees opposing each candidate have already poured in millions in advertising money and the spending is expected to continue in the six weeks remaining before Election Day.