The final Colorado governor’s debate between Democrat Jared Polis and Republican Walker Stapleton before Election Day 2018 took place Tuesday night and was hosted by Denver7, The Denver Post and the University of Denver’s Center on American Politics. 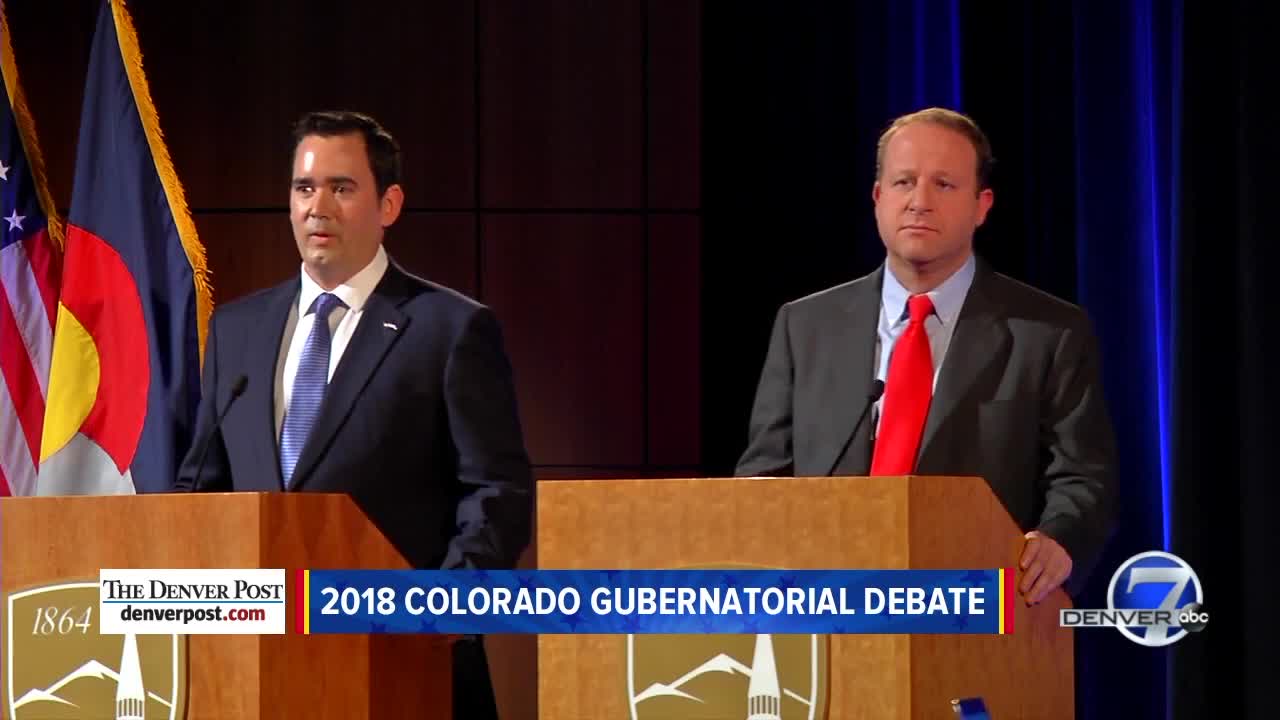 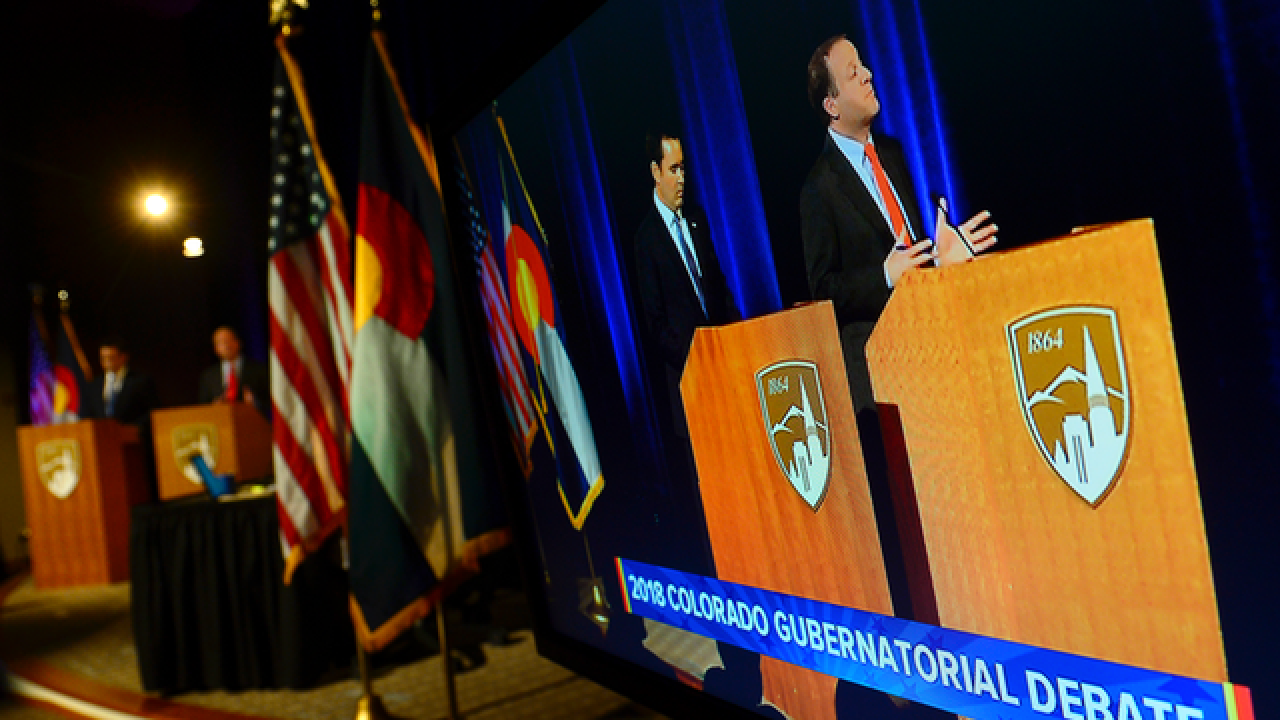 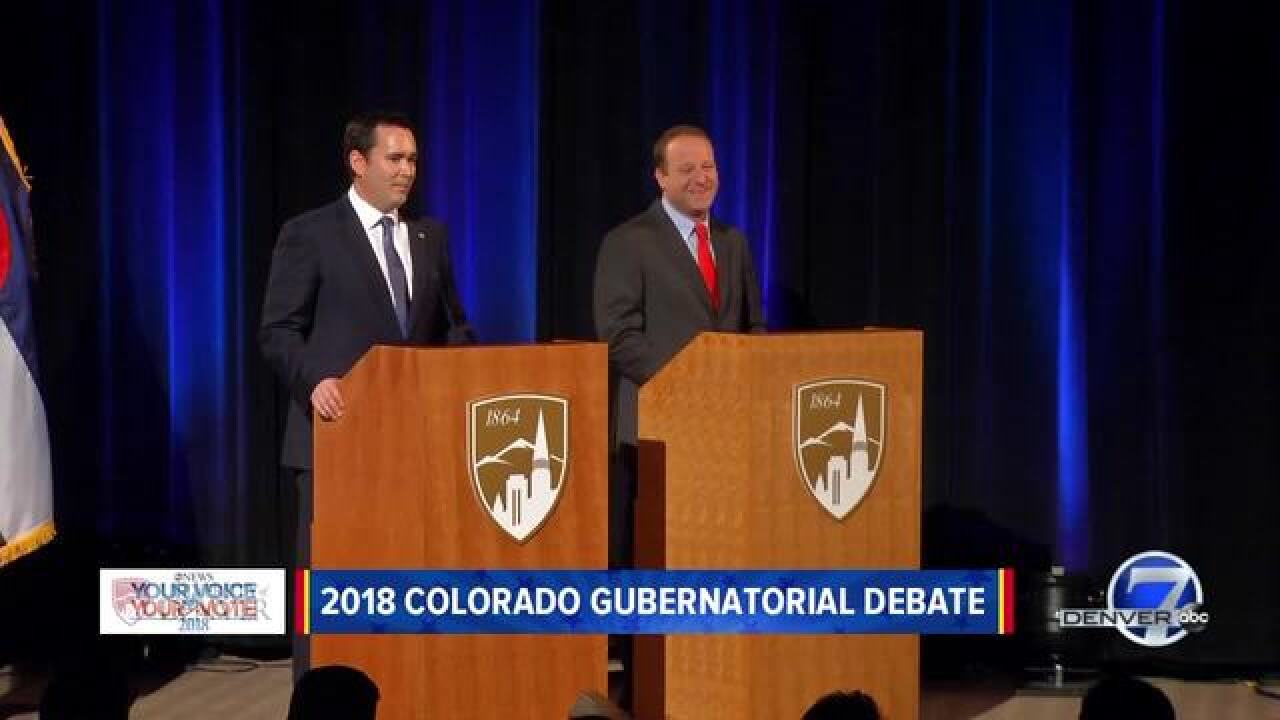 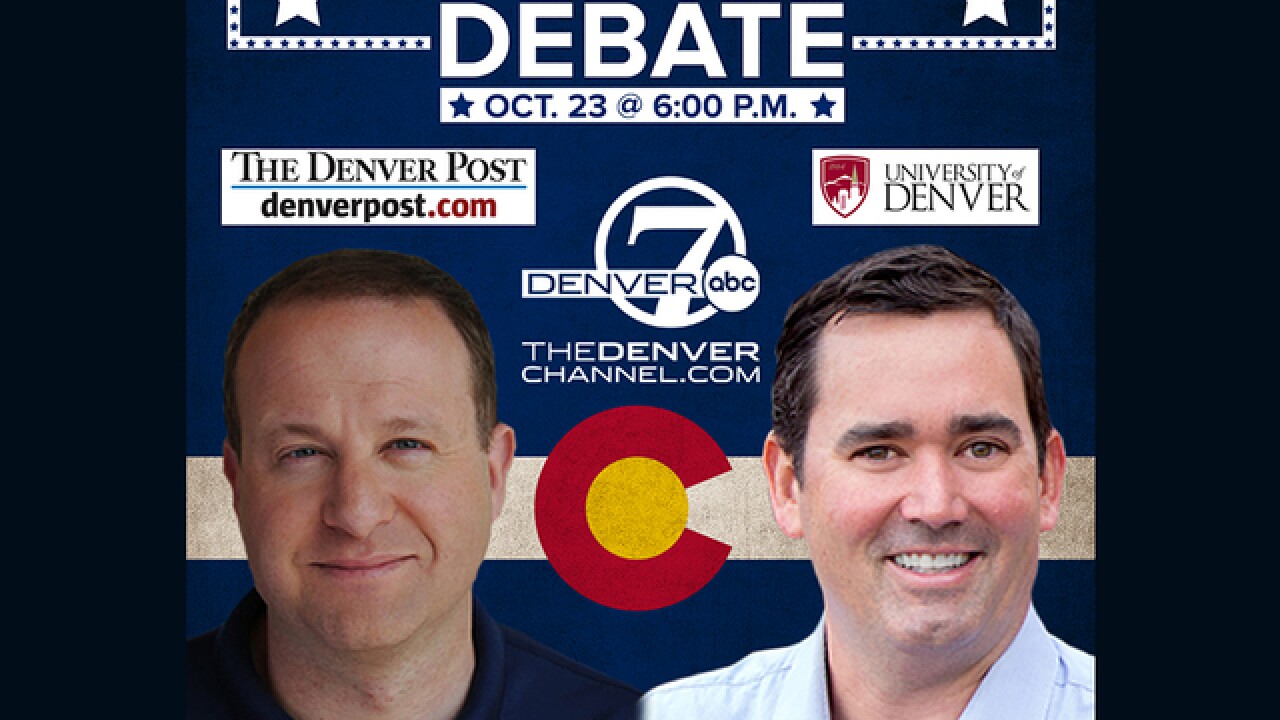 DENVER – The final Colorado governor’s debate between Democrat Jared Polis and Republican Walker Stapleton before Election Day 2018 took place Tuesday night and was hosted by Denver7, The Denver Post and the University of Denver’s Center on American Politics.

Watch the full debate in the player above. Below, you can find updates from the debate complete with video clips.

Stapleton and Polis are asked about whether or not they support Roe v. Wade and whether they think it is settled law after Brett Kavanaugh's confirmation to the US Supreme Court.

Stapleton says he supports Roe v. Wade "being law of the land" and that you "don't get to pick and choose" which parts of the US Constitution you like. But he also says he will be a "pro-life" governor.

Polis says that a woman's decision to choose should be made between herself, her doctor and her god and not Walker Stapleton. When Stapleton brings up what he says is Polis' support for abortions at the literal last minute before birth, Polis vehemently disagrees and says "nobody ever supports that kind of horrific thing you're talking about."

But he says that there are times that a mother or child's life could be in danger, and that those situations "should never be politicized."

Polis and Stapleton are asked about political correctness and the Donald Trump effect. The exchange below:

Stapleton says that he doesn't pay attention to "political gimmicks" like what Colorado Democrats have been doing with his Capitol parking spot. He says it's "hogwash" and that he drives, sometimes takes RTD and sometimes gets dropped off.

Polis defends his attendance record in Congress and said that the times in which he missed the most voters were mostly family related.

The two candidates are asked about the red flag law that failed in this year's legislature. Stapleton said, "The NRA won't make decisions for me," when asked about whether he would support such a bill if the NRA opposed it. He said he would like to see school resource officers in every school and would look into getting metal detectors in more schools. He said he likes the red flag bill that Arizona passed but didn't like the Colorado bill because he felt it was rushed and "didn't have due process."

Polis says he says there's nothing wrong with law-abiding gun owners for sport, hunting and that he believes in Second Amendment protections. He says he's concerned about the number of guns stolen from gun stores as of late and that he supports universal background checks. Polis says he will work with "responsible" gun owners.

The two talk about health care and how to lower costs. Polis says he wants to look at Medicaid bundling and negotiating prices with other states. Stapleton says he wants to improve access and that Polis "doesn't have the foggiest idea" of how to pay for his own plan.

Stapleton says there is a "moral obligation" to make Medicaid sustainable because of how many children are on it. Both agreed on pricing transparency. Polis talks about a bundle payment system like one used in Arkansas.

Both candidates discuss the need to end the cycle that involves people with substance abuse issues going to jail, getting back out, and going back in.

They are asked what they want to pay for and where they might cut back in the event of a recession.

Stapleton said he wants to update the Gallagher formula. But he says in the event of another recession, "We're not going to have to cut back." He says in a recession, he would bring "more transparency and accountability" and would protect higher education.

Polis says it would be hard to choose, but he wouldn't want to cut any funding for schools. He says he believes we can save on corrections and find a way to address mental health and substance abuse issues more effectively.

Stapleton says he would let U.S. Immigration and Customs Enforcement "do its job" and make sure Colorado has border security. He disagrees with the Trump administration on temporary visas for ski resorts and farm workers, he says.

Polis says that he would continue to follow through with Gov. Hickenlooper's executive order to not give any state taxpayer dollars to support family separation. But he says there needs to be better vetting. Stapleton says that Polis mischaracterized his stance on family separation.

The candidates discuss the role of women and people of color in their campaigns and in what could be their administration. Polis notes he's brought on a women as his lieutenant governor and has a female chief of staff and communication director. He also says, "I guarantee there will still be some role for white men in my administration."

Walker Stapleton says he wants to hire any person "regardless of gender, race or ethnicity" to his administration. But he says he "hopes" his administration is 75 percent women and 50 percent Latino, though he "doesn't believe in quotas."

Both say the governor sets the tone when it comes to workplace misconduct at the state Capitol.

Both Stapleton and Polis say they don't feel it is appropriate to discuss specific cases when asked about the Nathan Dunlap case. Both says they would review the case, but Stapleton says that he doesn't believe it's the role of the governor to readjudicate the case.

Asked about Climate change, Polis talks about his plan to get 100 percent renewable energy by 2040 or sooner. He says he believes he would have a "good chance" of getting that done if the Democrats win the legislature. Stapleton says he supports alternate energy but that he wants to keep government out of people's lives.

We start off the second part of the debate with another series of yes/no questions.

Both candidates say the state has a role in keeping affordable housing affordable. Asked if the Broncos should fire Vance Joseph, Stapleton says "not yet" and Polis says the same.

Asked about making TABOR changes to the revenue growth limit, Polis says he wants to make changes while Stapleton says he doesn't.

Polis says he supports a $12/hour minimum wage, while Stapleton says he doesn't.

Asked about whether bars and clubs should allow social marijuana consumption, Polis says it could be safer if highly regulated. Stapleton says he would veto such a bill if it came to his desk.

Polis would support a proposal to extend Colorado's College Opportunity Fund to DACA students, while Stapleton says he wouldn't.

Walker Stapleton says he wants to take a "collaborative approach" in regards to education and wants to work with schools that keep their administrative costs "in check." He says Polis' plan would necessitate a tax hike. But Polis says his plan allows for more flexibility.

They are then asked about transportation and the massive CDOT backlog.

Stapleton says he "hopes" Colorado can fix its roads without raising taxes and says he "will direct as much money as possible to roads." He talks, as he has before, about legalizing gambling and using that money to pay for it.

Polis says Proposition 109 would put Colorado in debt. He says he doesn't disagree with Stapleton about legal gambling, but notes it would take 600 years to pay off the backlog through those funds.

Jared Polis says it is "the will of the people" if voters approve Proposition 112 though he does not support the measure. Walker Stapleton says he would like the setback rules to stay where they are.

The candidates are asked yes/no questions on a handful of the November ballot initiatives and whether or not they support them.

Amendment 74: Polis – “strongly against”; Stapleton – “look to legislature to fix”

Both snipe at one another back and forth about their positions or lack thereof.

We start off the debate discussing all of the negative ads Coloradans have seen regarding both candidates.

Stapleton says he thinks negative ads are “unfortunate” and notes that he has been far outspent by Polis. “We are trying hard to get our message out and I think it’s resonating with voters,” he says.

Polis says Stapleton’s answer was “insincere” and talks about the “dark money” spending on behalf of Stapleton. “We’re talking about a positive vision for Colorado’s future,” he says.

The candidates are asked about how their wealth plays a factor in this election. Polis says the fact that he’s spending his own money protects him from special interest spending, while Stapleton says that Polis wouldn’t be in the race if he couldn’t spend his own money.

Stapleton says it can be hard to get his message out when Polis is outspending him.

Walker Stapleton will get to answer the first question. The order was determined by a coin flip.

The debate begins at 6 p.m. MT Tuesday and will run until 7 p.m. on Denver7, then will continue with another half-hour of online streaming only.

The full hour-and-a-half debate will also be streamed live on TheDenverChannel.com, Denver7’s Facebook and Twitter pages, Denver7’s app and streaming devices, as well as at DenverPost.com and the newspaper’s social media sites.