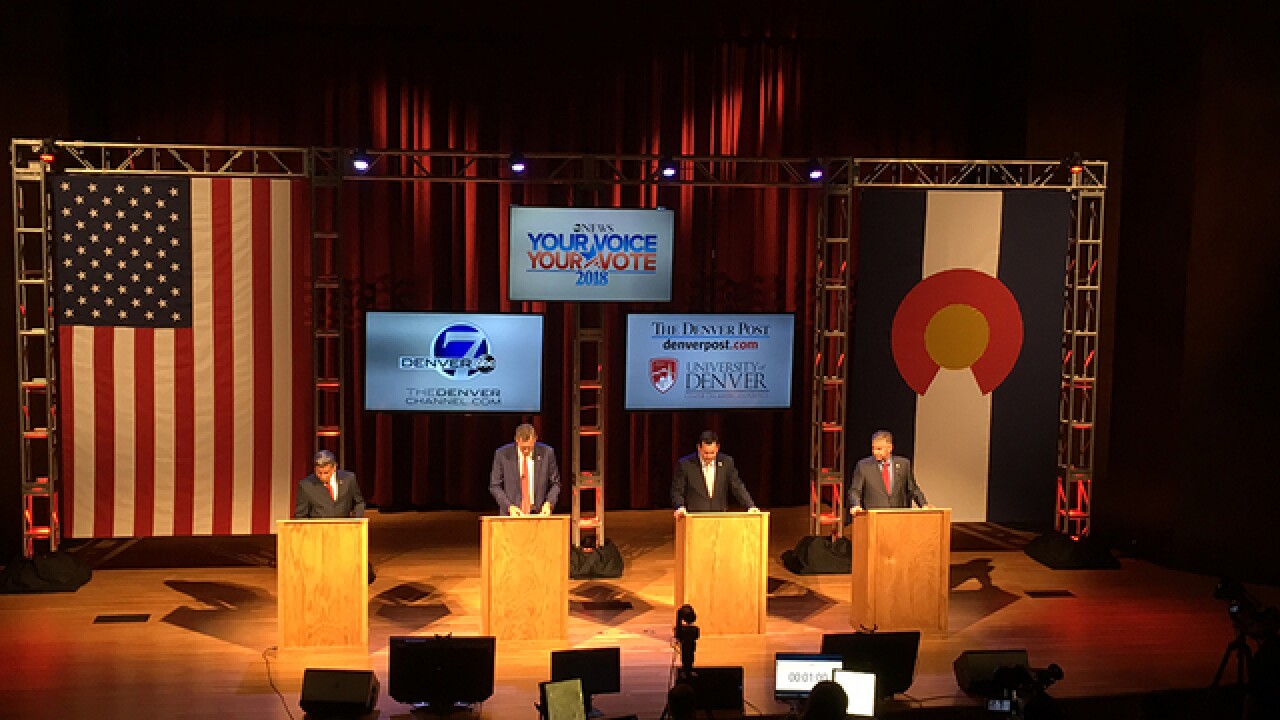 Copyright 2018 Scripps Media, Inc. All rights reserved. This material may not be published, broadcast, rewritten, or redistributed.
<p>Greg Lopez, Doug Robinson, Walker Stapleton and Victor Mitchell on stage at the Denver7-Denver Post Republican gubernatorial debate hosted at the University of Denver.</p> 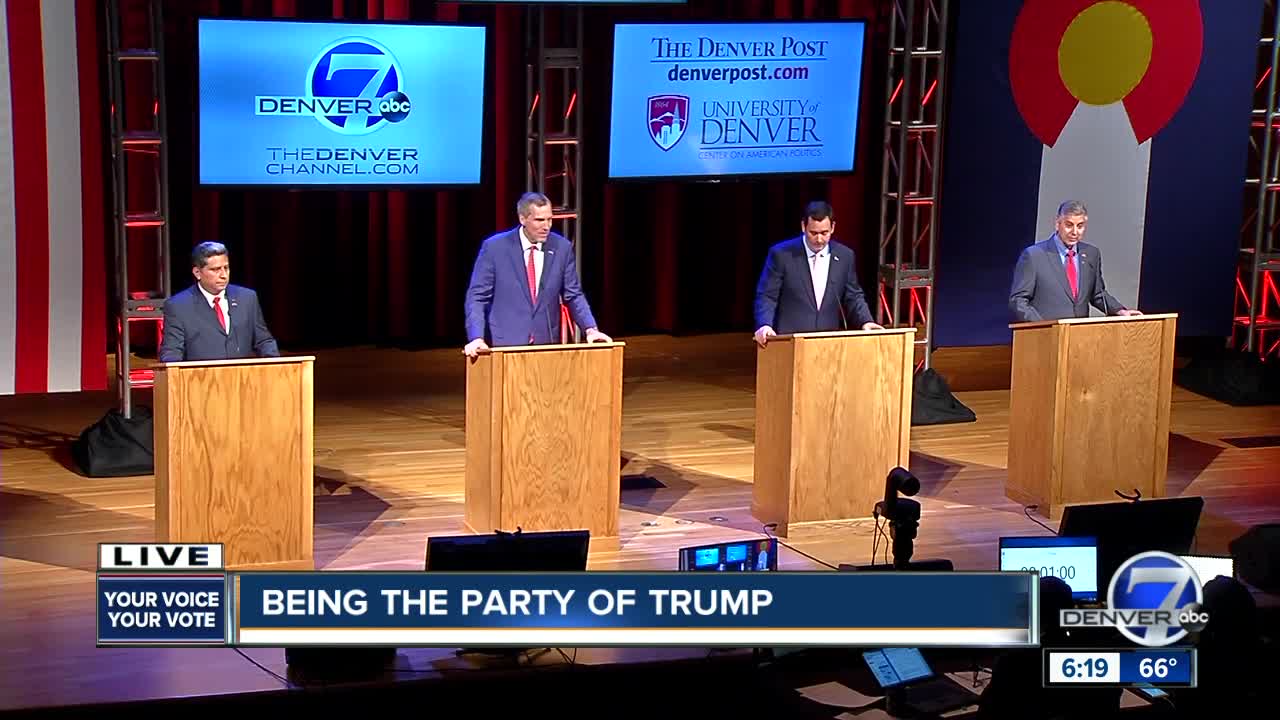 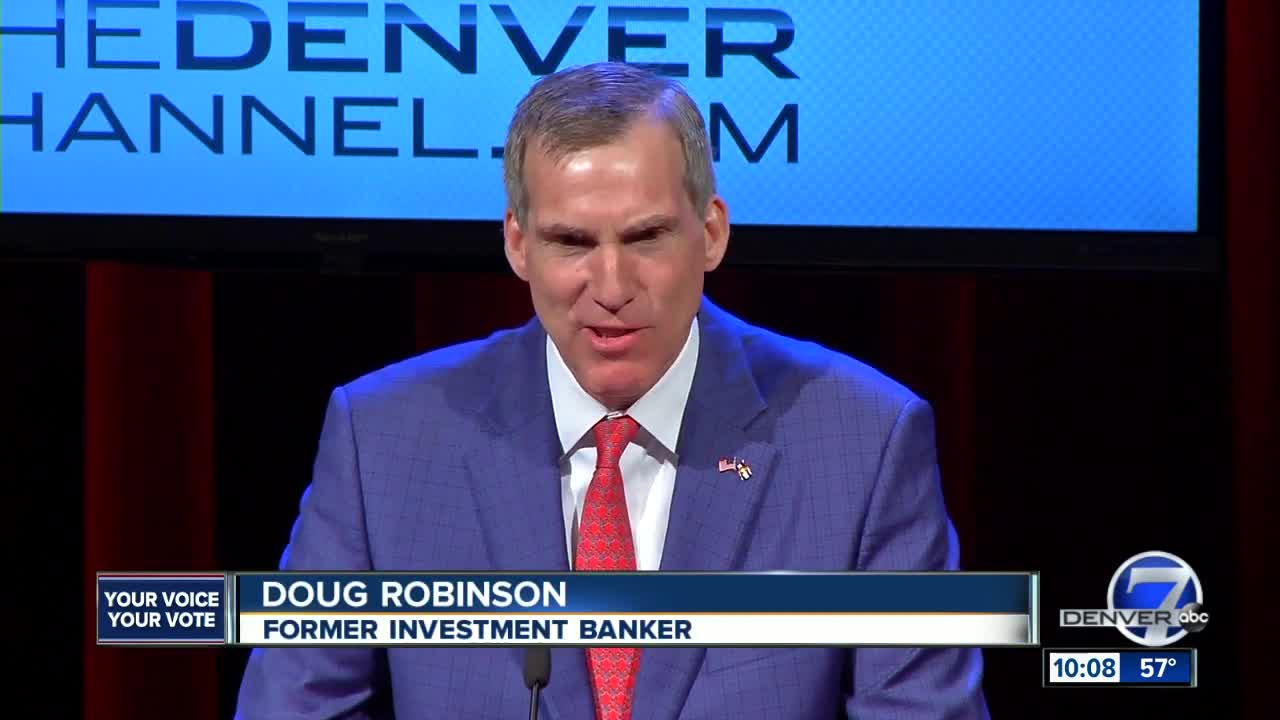 DENVER – Denver7 and The Denver Post hosted a debate Tuesday night at the University of Denver with the four remaining Republican gubernatorial candidates ahead of Colorado’s June 26 primaries.

READ: Guide to the candidates | Guide to the primaries | Recap of the Democratic debate | More about the debates

You can watch the full debate in the player above, in the player embedded below, or by clicking here. You can read below for updates from Denver7 from during the debate.

The final question for the candidates: what would your significant other say is your most annoying trait? Mitchell said that his wife would say he’s “too relentless” and needs to take a break. Lopez said he doesn’t allow people to finish their sentences because he’s hard of hearing in one ear. Robinson had a couple answers: everyone’s tired of his love for Neil Diamond and he farts and the dinner table. Stapleton says he forgets to put the toilet seat down at night.

Asked about what fourth graders should learn in school about guns, the candidates give varying answers. Stapleton said he would talk to his kids about telling people in positions of trust if they see something, saying they should talk to their teacher or a safety official. Mitchell said that it was important teachers are truthful with their students about the realities of guns. Lopez said he would tell them to have a conversation with their parents about gun safety and how guns are utilized. Robinson said “teachers should be saying nothing,” saying that it’s not the teacher’s role to talk to kids about guns, but rather the parents’ role.

Toward the end of the debate, the candidates are asked about urban growth and housing prices, as well as the rural-urban divide.

Regarding how they could lower the exploding home prices in the area, Lopez said he would look at water issues and look at ways to cut down regulations and focus on better zoning and planning. Robinson said most of that should be left up to the private sector. Stapleton said he had experience with mortgages from his business days and said that there could be changes to the regulatory and permit processes to lower costs. Mitchell said there were too many building codes and too many regulations and that higher wages would be necessary.

Regarding rural Colorado, Stapleton noted his support from some rural county commissioners and said he supported a planned pipeline project on the Western Slope. Mitchell said there needed to be new economic development focused on rural employers and a diversion of marijuana tax revenue to go more to public schools and rural schools. Lopez noted he lives in rural Elbert County and said the urban corridor “doesn’t understand” the value of the rural parts of the state. He said he would be a governor who doesn’t forget there are 64 counties in the state. Robinson floated the idea of decentralizing the state government and moving more offices to rural Colorado, along with focusing more economic development in rural Colorado.

The candidates talk about the oil and gas industry and setbacks. Walker Stapleton says he won’t be a puppet to the oil and gas industry despite its contributions to his campaign if he’s elected. The candidates all said they believe teachers need to be better-compensated, but pointed to the underfunded pension and a lack of transparency as reasons why they’re not getting paid enough. All called for various reforms to PERA and to the way money gets to teachers beyond administrators.

The candidates are asked about what they can do to ensure women get paid equal to men in the workplace and shatter the gender gap, including for those who have daughters. Mitchell said he was proud of his company’s work and didn’t think he’d ever paid a woman differently during 32 years. Lopez said it was “very important” to end the gender gap. Robinson said he’d “love to have a woman” as governor. Stapleton says he tells his daughters they should believe “they can be anything they want to be.”

The candidates are then asked a series of yes/no questions. All opposed spending taxpayer money on exploration of a Hyperloop system. Asked whether they would have signed the PERA fix bill that came out of the General Assembly, Robinson and Stapleton said yes, but Mitchell and Lopez said no. All four said they didn’t want to raise taxes to fix our state’s roads and infrastructure. They all said they would vote for whoever the Republican nominee is.

The candidates are asked which Democrats they would like to face in November should they become the Republican nominee. Mitchell said he’d “love to face” Jared Polis. Lopez didn’t directly answer, saying it was up to the voters. Robinson said he thinks Cary Kennedy is the most beatable. Stapleton said he thinks Polis will be the nominee.

The candidates are asked if they believe climate change is caused by humans. Lopez says no. Robinson says yes. Stapleton says yes. Mitchell says “likely” yes, but he’s “not a scientist.”

All said they would support President Trump’s changes to Title X.

The candidates are asked if they agree with President Trump that the media are the “enemy of the people.” Stapleton says there is bias in the media and that he’s been “frustrated” at times by coverage. He said he believes he needs to get a “fair shake” in the media and said there’s “definitely a left-leaning media bias.”

Mitchell said, “I don’t think the media is the enemy at all,” but agreed that there were some who had a “left-leaning bias.” But he also noted that many Republicans have a right-leaning bias and listen to Fox News and other conservative outlet.

Lopez said that the media are “not the enemy” but said people were questioning if they were being equal. He said the media “need to be careful” because they could lose more trusted. “Be more balanced and fair and we’ll be better off,” he said. He said the media was not part of the “deep state.”

Mitchell said that he believes Colorado media are “professional and fair.” But he said he was concerned about the pool of press shrinking. He says he’s been accessible and thinks Republicans need to be accessible to the media.

The candidates are asked on which policies they may split from President Trump.

Robinson said he wasn’t a fan of some of the recent trade and tariff policies or the family separation policy. Mitchell said he supports what Trump is doing in “some respects.” He said that Trump’s style is “different” and that the president can be “crass” at times, and that he worries about a “trade war” with Canada. He said that Trump should have outright repealed the Affordable Care Act. Lopez said the president doesn’t speak for Colorado, but rather the governor does. He said he “never would have passed that huge budget bill” because it adds an additional burden on taxpayers. But he appreciates the job creation numbers. Stapleton said he supports the president and will work with the White House. But he said that would be on an “issue-by-issue” basis and said he’d stand up to the White House regardless of who the president is if it is good for Coloradans. Mitchell added that he’s the “closest” candidate to President Trump.

Regarding so-called “sanctuary cities,” Greg Lopez said they are “unamerican and unlawful.” Robinson said that undocumented immigrants should be turned over to law enforcement but thinks there should be protections for children under DACA. Stapleton says there should be a “uniform single policy” for Colorado law enforcement. He focused on felons, saying they should be deported. Specifically, he pointed to Denver as being a “sanctuary city” and hinted that Aurora has similar policies. Mitchell said he’s “strongly opposed” to any sanctuary cities but said he’d cut funding for them—naming specifically Denver, Aurora and Boulder. He also said that he’d support civil liabilities for any elected official who refuses to cooperate with ICE.

The first question the candidates were asked was if they support the Trump administration’s policy of separating children from their parents at the border. If not, what would they do about it, they are asked?

Victor Mitchell said President Trump was “on the right track” to comprehensive immigration reform but said that the family separation was a “sad outcome.”

Greg Lopez said he “truly believes separating kids from their parents is something we don’t ever want to see.” But he said that parents are putting their children in harm’s way by bringing them to the border knowing they’ll be separated. “I support the fact that we’re following the rule of law,” he said. But he said they should be given the opportunity to understand they could come back legally.

Walker Stapleton said that the “last thing” anybody wants is to see families broken up. But he said he agrees with Trump’s actions. He called for comprehensive immigration reform and said Congress needed to fix the policy.

The debate is scheduled to begin at 6 p.m. From left to right on stage will be Greg Lopez, Doug Robinson, Walker Stapleton and Victor Mitchell. A panel discussion will follow on Denver7's Facebook page and live stream featuring House Speaker Crisanta Duran and former House Majority Leader Amy Stephens.