In 2020 State of the State address, Gov. Polis says now is the time to work for future generations 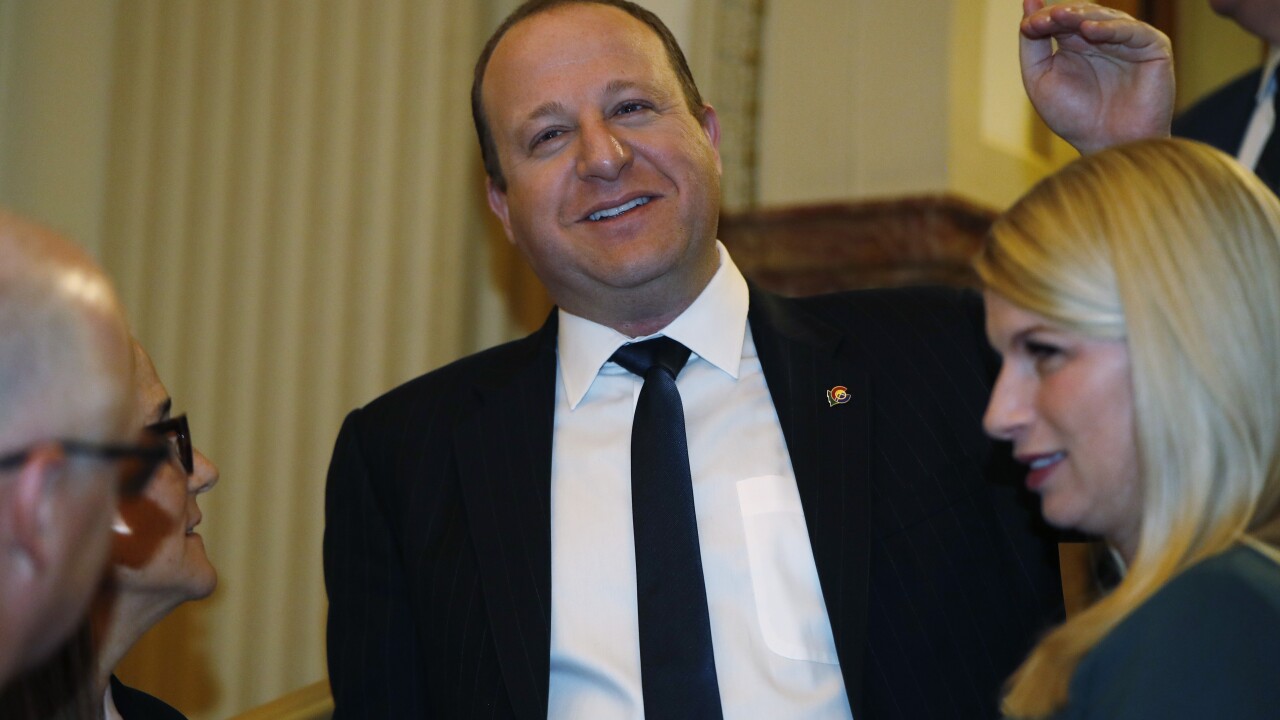 (Copyright 2020 The Associated Press. All rights reserved. This material may not be published, broadcast, rewritten or redistributed.)
David Zalubowski/AP
Colorado Gov. Jared Polis chats with lawmakers before entering the House of Representatives to deliver his State of State speech in the State Capitol Thursday, Jan. 9, 2020, in Denver. (AP Photo/David Zalubowski) 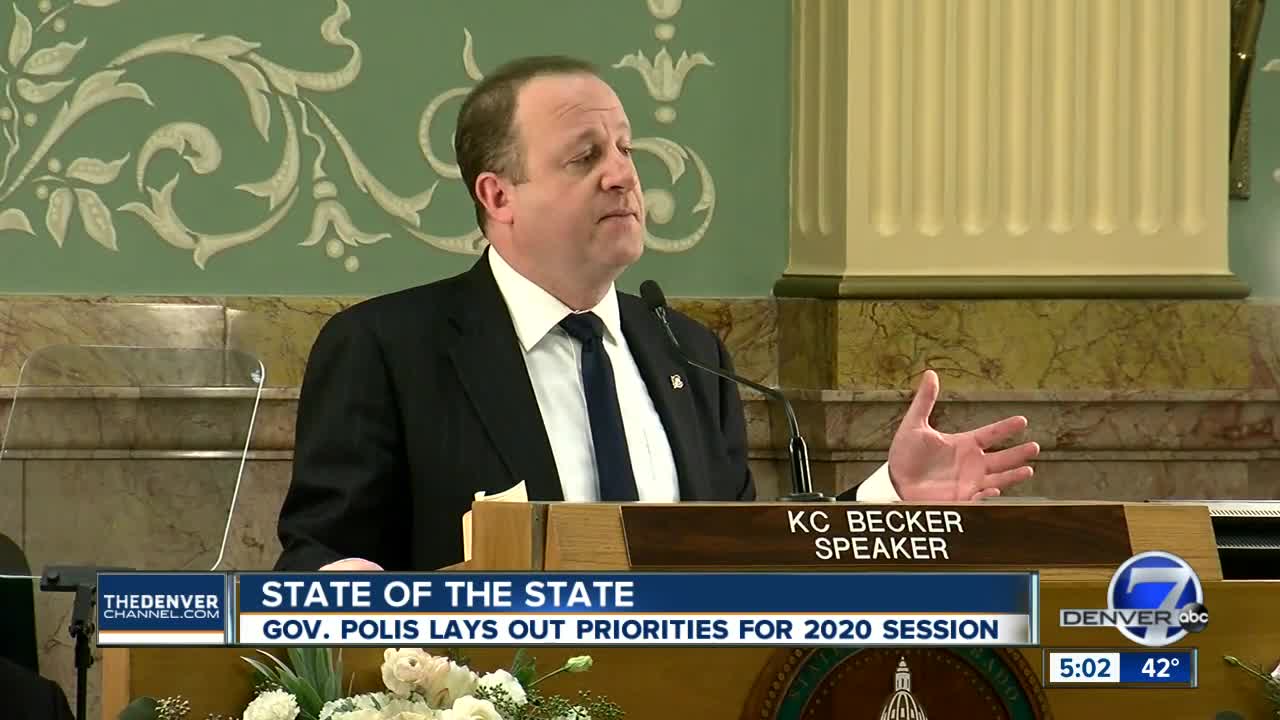 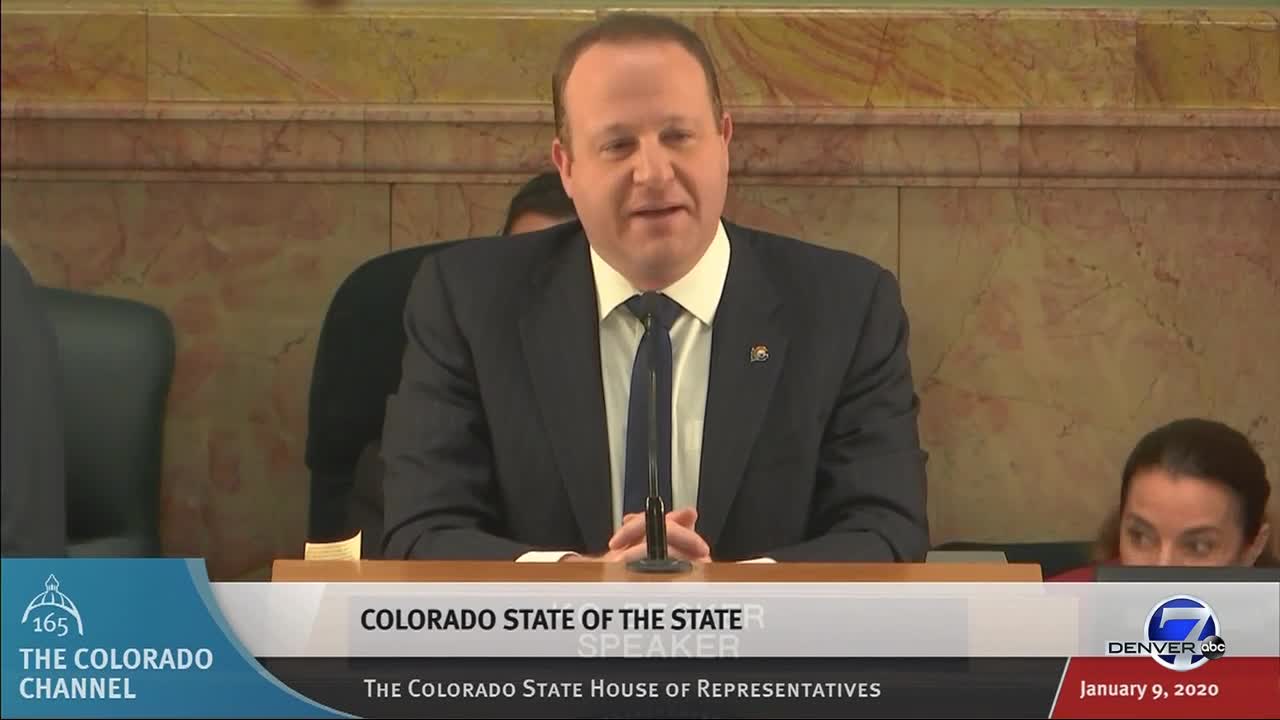 DENVER – Colorado Gov. Jared Polis looked to the future in his second State of the State address Thursday at the state Capitol, telling the lawmakers and others gathered that while the state of the state is strong, there is much needed to be done to ensure it remains strong in the decades ahead and for the next generations.

In Polis’ typical nerdy fashion, he ended his speech with a quote from Lord of the Rings: “All we have to decide is what to do with the time that is given to us.”

But the quote was a due summation of his speech, in which he – as most lawmakers have so far in the leadup to the 2020 session – touted the education, health care and oil and gas-related measures passed last year but said there was more work to be done – particularly regarding cost-of-living expenses in Colorado, climate change, education and health care.

His first portion of the speech focused on education and investing in the state’s children for the future.

After implementing free full-day kindergarten last year – a program which received heavy applause when mentioned Thursday – and adding around 5,100 new slots to the Colorado Preschool Program, Polis reiterated his budget request for this year to add another 6,000 slots for the program.

If passed, that would make half of Colorado children eligible for preschool coverage, Polis said, and he reiterated his hope to have universal access to preschool for 4-year-olds by the end of his first term.

He said he hoped to reduce the Budget Stabilization Factor by an additional $52 million on top of the $100 million reduction last year and said that he hoped to fix the teacher pay system.

On higher education, he touted a new proposal – the “Get On Your Feet” loan program – that would, if passed, allow new graduates of Colorado public colleges who stay in the state to have their first two years of student loans paid for by the state. And he congratulated the first two children born in 2020 for being the first beneficiaries of the new college savings account program that went into effect Jan. 1.

Perhaps the most emotional moment – and loudest applause – came when Polis introduced John and Maria Castillo, the parents of Kendrick Castillo, who was killed in last May’s shooting at STEM School Highlands Ranch.

“The despair of losing a child to senseless violence is a weight that too many parents have been forced to bear for far too long,” Polis said. “I want to commend the school safety interim committee for your bipartisan work on this important issue. I look forward to working with you to do more to keep our kids safer, because no parent should have to go through what John and Maria went through.”

As have lawmakers on both sides of the aisle in early-session discussions, Polis then touched on the state’s economy, its future and how it is working or not for people in various parts of Colorado.

He touted another state income tax cut for taxpayers and another small business tax cut that he said were helping save people money and said lawmakers should find more tax breaks for special interests to lower rates for everyone – then pledged to create a bipartisan study group to look at the state tax code and try to broaden the tax base and lower rates.

And as he did last year, he pledged to continue saving for future Coloradans and the possibility of any economic slowdowns or recessions.

“With so many pressing needs today, putting money in reserves is always a hard sell, but we have an obligation to save during prosperous times like these so we can weather the next storm whenever it comes,” Polis said.

After the legislature put $40 million into reserve funds last year instead of the $180 million Polis had asked for, he requested $118 million be put into reserves this year to “prepare us for a future downturn.”

Polis also looked to the future on health care. While he outlined all that the administration did last year to try and reduce health care costs – including efforts on importing prescription drugs, out-of-network billing and reinsurance – he said there was much more to be done: “We know that health care costs won’t magically go down on their own. We need to keep working at it.”

He said he would be supporting the public option proposal that Democratic lawmakers have been discussing and a measure on prescription drug price transparency, saying a public option would save Coloradans 9-18% on their premiums and give those living in the 22 counties that only have one insurance option another choice.

But he acknowledged, as well, the staunch opposition to those measures from hospital groups and insurance companies, as well as the ads from those groups that are already running against the public option.

Polis said he’d also like a continued focus on behavioral and mental health care in the state and to find a way to reduce smoking and teen vaping in Colorado, which is highest in the nation.

He said he would be supporting one of Democratic lawmakers’ top efforts this year – to create a paid family leave program after last year’s effort failed amid heavy opposition from business groups.

“I’m hopeful we can construct a unique Colorado solution that provides paid time off to many more Coloradans as soon as possible, without straining state resources or forcing taxpayers to bear the financial risk,” Polis said, adding that he hoped to extend paid family leave to state employees in the next fiscal year..

But he acknowledged it was not going to be easy and would take compromises on both sides of the aisle to be accomplished.

“True leadership is planting trees knowing that we may not live long enough to enjoy their shade,” he said.

Polis said he would be asking lawmakers for a one-time transfer from the General Fund to improve trails, bathrooms, parking and other facilities at state parks, and that he is asking for a $10 million investment in the Colorado Water Plan on top of what will come in from sports gambling after it gets up and running in May.

And he talked about the future of Colorado’s roads and what needed to be done this session to find a way to start better funding transportation projects after the failure of multiple ballot issues that would have raised revenue.

He said he’d like local municipalities and CDOT to have more flexibility on funding regional transportation projects but said that rural Colorado could not be forgotten.

“We must deliver for everyone in our state, and it’s going to take all of us in this room working together to get it done,” Polis said.

Democratic leaders maintain that a new funding source is needed but also that they want any solutions to be bipartisan, while Republicans say there shouldn’t be new taxes or fees to come up with the funding.

Polis’ final portion of his speech was about the future of Coloradans and their climate. It came after environmental protesters were booted from the gallery at the onset of the speech when they shouted out and unfurled banners opposing oil and gas development.

In his speech, Polis noted Colorado had seen 13 of the largest fires in state history in the last decade. He commended the Colorado firefighters were battling the massive brush fires in Australia that have invigorated climate change discussions in recent weeks.

“If we want to preserve our way of life for future generations, then we all need to lead on clean air and climate,” he said. “And in fact, the states and countries that embrace the renewable energy future will reap the economic rewards.”

He lauded some of the renewable energy transformations taking place in Colorado’s coal industry and Xcel’s solar project in Pueblo.

“This is what the renewable energy future looks like: innovating, growing jobs, growing opportunity, saving people money, and doing our part to reduce the harmful effects of climate change and local air pollution in the process,” he said. “And we don’t have time to waste.”

Summing up his speech, Polis again looked ahead. What would our great-grandchildren read about us in Colorado in the future – a story of timidity and cynicism or one of a generation that rose to a challenge, he asked. He called Colorado a state of trailblazers, full of bold and courageous people who don’t back down when the going gets tough.

“We have the power to do the right thing, he said. “All we need is the courage to use it.”