Rep. Jason Crow is one of House impeachment managers 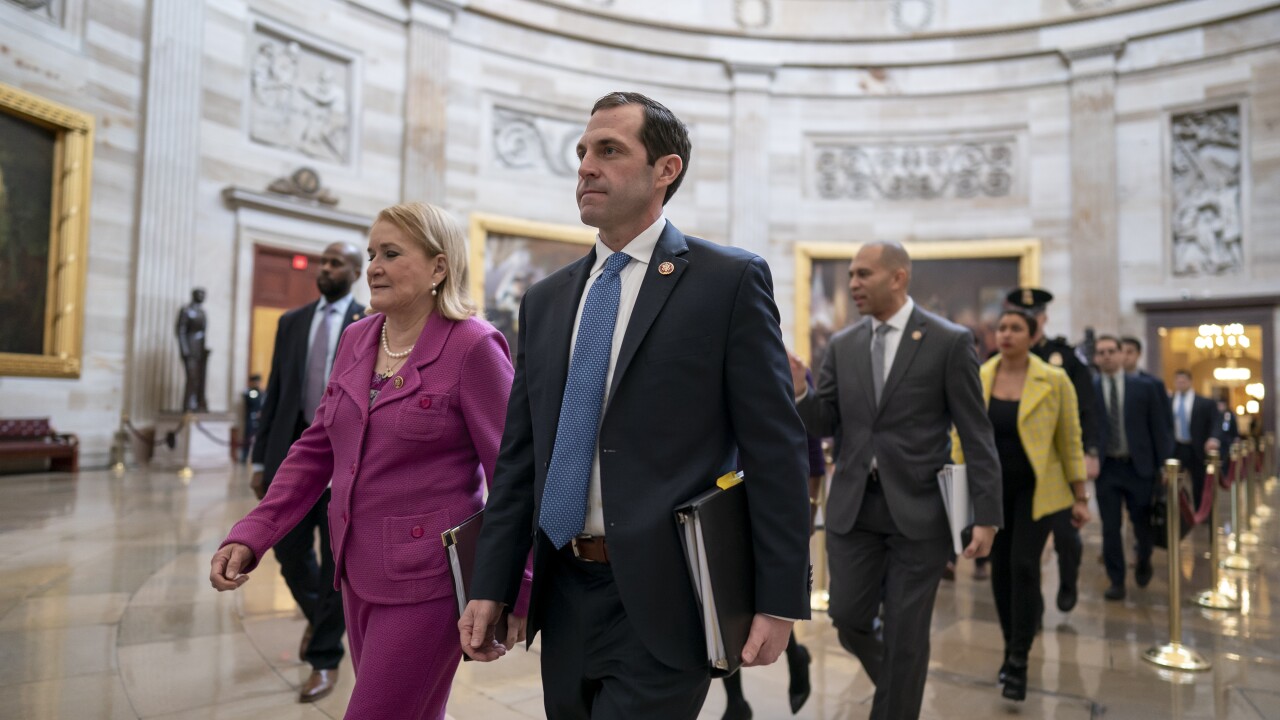 (Copyright 2020 The Associated Press. All rights reserved. This material may not be published, broadcast, rewritten or redistributed.)
J. Scott Applewhite/AP
From left, Rep. Sylvia Garcia, D-Texas, Rep. Jason Crow, D-Colo., and Rep. Hakeem Jeffries, D-N.Y., join other House Democratic managers as they walk to the Senate for the impeachment trial of President Donald Trump on charges of abuse of power and obstruction of Congress, in Washington, Friday, Jan. 24, 2020. (AP Photo/J. Scott Applewhite)

DENVER – U.S. Rep. Jason Crow said Monday that the information released in a news report Sunday night regarding a manuscript of former national security adviser John Bolton’s upcoming book should push more senators and Americans to call for more witnesses and documents in the trial.

Crow, the Colorado Democrat who is also one of the House impeachment managers in President Donald Trump’s Senate impeachment trial, held a conference call Monday morning with Colorado reporters hours before the president’s defense team started the second day of its presentation to the Senate.

He spoke about his experience so far as one of the House impeachment managers and discussed the Sunday news from the New York Times, which reported that Bolton’s upcoming book would say that President Trump told Bolton he wanted to keep $391 million in congressionally-approved military aid to Ukraine frozen until the new Ukrainian administration agreed to investigate Trump’s political rival, Joe Biden, and Biden’s son Hunter.

The report has reinvigorated calls for Republican senators to vote to call more witnesses – including Bolton – and subpoena more documents in the trial, documents which have so far been withheld by the White House. Republicans last week voted down on party lines 11 amendments to the trial rules proposed by Senate Minority Leader Chuck Schumer, D-N.Y., that sought to subpoena documents being held by the Trump administration and several witnesses, like acting chief of staff and OMB director Mick Mulvaney and Bolton.

Bolton declined to testify in the House impeachment inquiry at the White House’s direction, and House Democrats elected not to subpoena Bolton out of fear the court case that would follow over whether he could testify would drag out the length of the inquiry.

But the House impeachment managers, including Crow, and most Senate Democrats, including Sen. Michael Bennet, D-Colo., have been pressing Republicans to reconsider allowing more witnesses and subpoenaing more documents in the case to give Americans and the Senate a full scope of what happened before a vote on whether to convict the president.

Many Republicans, administration officials, and Trump’s defense counsel have maintained that there have been no firsthand witnesses who have directly said that Trump withheld the aid in exchange for the investigation – despite many secondhand witnesses testifying that was the case during the House impeachment inquiry – but Bolton’s manuscript has complicated that claim.

The president denied the claims by Bolton which the Times reported, tweeting early Monday that if Bolton had made such claims, “it was only to sell a book.” He has maintained that people should read the so-called “transcript” of his call with the Ukrainian president, despite it being a memo of the call and not a full transcript.

“That shows the president did indeed ask for a foreign government to interfere in our elections and withheld military aid to force the government to do so,” Crow said.

Six polls released over the last week showed a majority of Americans – and often more than two-thirds of those polled – support having more witnesses called and more documents subpoenaed in the Senate trial. A Morning Consult/Politico poll was on the lower end of support, with 57% of people polled supporting more witnesses and documents, and a Reuters/Ipsos poll showed 72% of people polled supporting more documents and witnesses and was on the higher end of support among the six polls.

“I will say, that’s overwhelmingly what the American people want,” Crow said Monday. “Over 70% of America wants that, wants a fair trial. Those senators need to understand that.”

Crow criticized the handful of senators who said before the trial began that they would not be voting to remove the president and who claimed to have already seen enough evidence to acquit the president before they took their oaths.

“That’s not the way it’s supposed to be. They took an oath. They swore, not just an oath, to be an impartial juror in this case when the trial first opened, but the other, larger oath as senators and members of Congress,” Crow said. “And they have to abide by that.”

“I think they also have to more broadly understand that our system of checks and balances require that the Congress not be a rubber stamp for the presidency,” Crow added. “They shouldn’t be taking marching orders from the White House. So, they have an independent obligation to the American people and their constituents, and we are going to continue to reiterate that in the days to come.”

During Monday’s arguments, Trump attorney Jay Sekulow argued that “not a single witness” had said what Bolton had claimed in the manuscript, which Democrats used during a break to say that the defense team was making the House managers’ argument about needing more witnesses for them.

And some Republican senators, including Mitt Romney and Susan Collins, said Monday that Bolton’s manuscript increased the likelihood that they and at least four Republicans might vote later this week with Democrats to call for more witnesses and documents.

A spokesperson for Sen. Cory Gardner, R-Colo., reiterated sentiments he has expressed since the onset of the trial that he was focused on being an impartial juror and listening to arguments from both sides while “fulfilling [his] Constitutional duty.”

Sen. Michael Bennet, D-Colo., who demanded Republicans consider another vote for witnesses and documents in a conference call with Colorado reporters last week, said on MSNBC Monday that Republican senators would have to take a hard look at themselves and their legacies after the Bolton manuscript revelation.

Crow said it was important for Americans to pay attention to the facts of the case and not what he called distractions and personality attacks brought up by the president and his team. On Monday’s call, Crow again touched on his main point he has hammered home during his hearing speaking time: how Ukraine’s military may have been affected by the hold on aid and how he, as a former soldier, would have felt under such conditions.

“That might make some folks feel uncomfortable – the realization that this has real and difficult circumstances for people, including Ukrainian soldiers. They are fighting every day on the front lines and in the trenches of this war. And the delay in aid had real consequences for them,” he said.

He said he is “intensely focused on what is in front of me” and said the impeachment managers would continue to convince senators to call more witnesses and see more documents. Once the president’s team finishes its arguments, the senators will have 16 hours for questions. Further votes – potentially on whether to toss the case altogether or to open debate on calling more witnesses and documents – would happen afterward and possibly later this week.

If senators do not vote to hear more witnesses and documents, the trial could be over by the end of the week.

“I don’t think anybody can read the senators’ minds right now, and I don’t think anyone can say with any confidence what they’re thinking. Only they know what they’re thinking,” Crow said. “Only they know how they’re going to ultimately vote at the end of the day. And our approach is not going to change. We have the facts overwhelmingly on our side.”