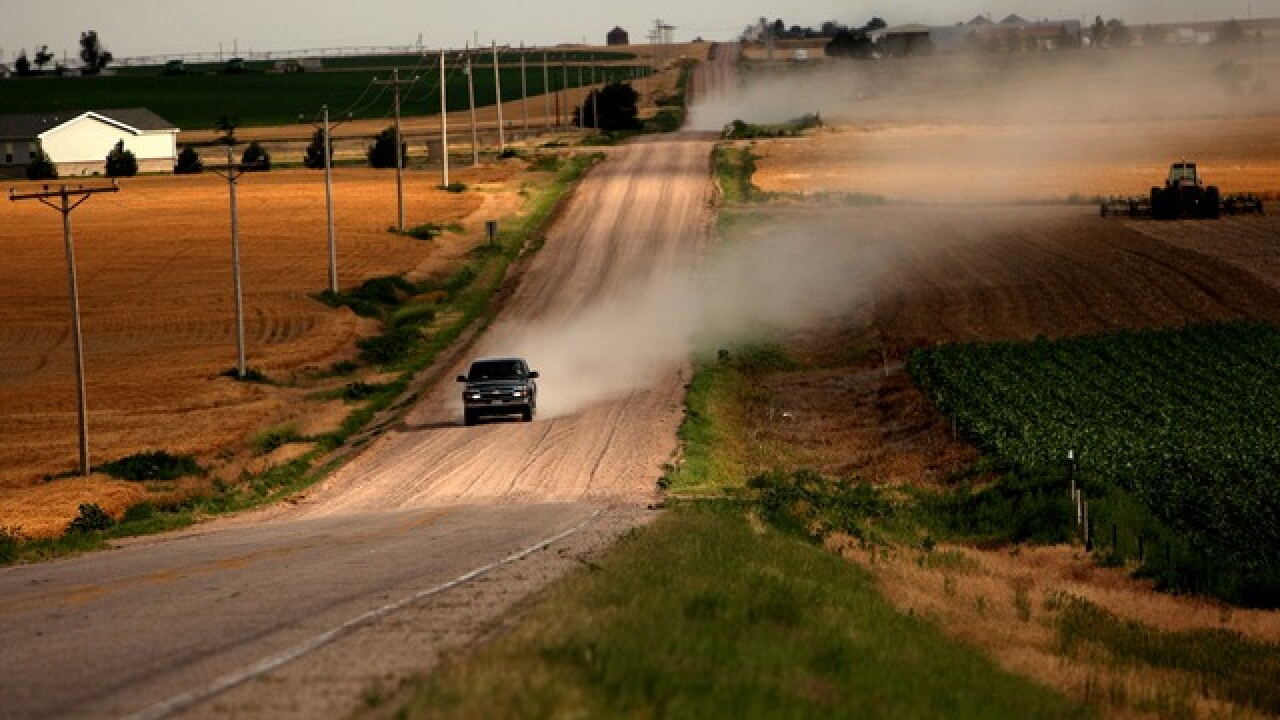 2007 Getty Images
Spencer Platt
<p>BURLINGTON, COLORADO -JUNE 27: A truck makes its way down a dirt road June 27, 2007 in Burlington, Colorado. When rural America was chronicled 50 years ago by Jack Kerouac in his autobiographical novel "On the Road", it was an America full of promise and economic potential, where the majestic openness of the land was entwined with the cult of the automobile. Today, partly due to the loss of the independent family farm, rural America is a state of economic and demographic decline. (Photo by Spencer Platt/Getty Images)</p>

DENVER (AP) — The Colorado House on Wednesday passed a bipartisan bill aimed at boosting the ranks of the state's agricultural workforce by letting immigrants who are in the country illegally renew their driver's licenses online or by mail.

The bill is supported by dairy, cattle and produce farmers and seen as an effort to overcome objections that granting the licenses validates efforts to enter the U.S. illegally.

The Senate will now consider minor amendments by the Democrat-led House. If approved, it will be sent to Democratic Gov. John Hickenlooper.

Colorado has issued the driver's licenses since 2014. But they must be renewed in person every three years at one of three Department of Motor Vehicles offices devoted to that purpose.

The waiting list for renewals is months long, preventing many workers from driving to their jobs and operating farm or construction machinery once they arrive.

In addition, the state has seen illegal sales of appointments that have already been booked by immigrants.

A similar bill died in the Republican-led Senate last year. This year, GOP Sens. Don Coram and Larry Crowder introduced new legislation , arguing the economies of their rural western and southern Colorado districts are at stake and that workers need to drive safely and legally. The Senate passed the bill.

Immigrants who can prove they live in Colorado are eligible for the licenses.

The bill also would allow people to use Social Security numbers — obtained through work or student visas and by those protected from deportation under the Deferred Action for Childhood Arrivals program — to obtain Colorado licenses.

Currently, Colorado issues licenses to those who can provide individual taxpayer identification numbers, which are granted to immigrants by the IRS to pay taxes.

"I understand the problems with national immigration but this isn't related to that," Crowder said when he introduced the bill, steering the debate away from the Donald Trump administration's crackdown on immigrants living in the country illegally, an effort supported by many Colorado Republican lawmakers.

Twelve states and the District of Columbia offer special licenses to immigrants in the country illegally. Supporters say the licenses ensure immigrants know driving laws and help keep them insured. Colorado's program is self-funded by fees.

More than 30,000 Colorado driver licenses have been issued to people unable to demonstrate they're in the U.S. legally. Colorado had an estimated 200,000 such residents in 2014.

"Having people with driver's licenses makes our roads safer. People behind the wheel know the rules of road and a license makes it easier to get auto insurance," said Joe Sammen, executive director of Center for Health Progress, a Denver-based advocacy group.

Colorado's bill doesn't address other questions about its program. Immigrant services at DMV offices in Colorado Springs and Grand Junction are set to close once a 66,000-appointment cap is reached sometime this fall.

That would leave just one office in Denver that offers 93 appointments each day.

"We are going to have to revisit that issue next year," said Democratic Rep. Jonathan Singer, a bill co-sponsor.