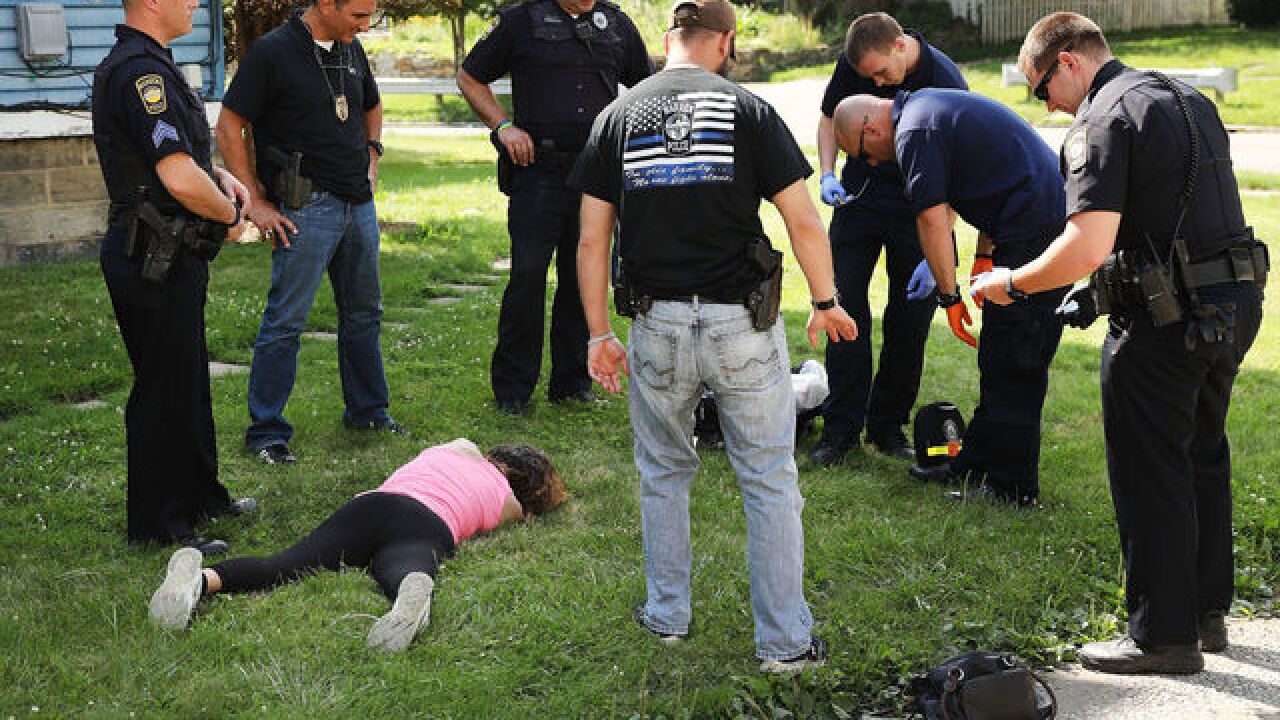 2017 Getty Images
Spencer Platt
<p>WARREN, OH - JULY 14: Medical workers and police treat a woman who has overdosed on heroin, the second case in a matter of minutes, on July 14, 2017 in Warren, Ohio. According to recent statistics, at least 4,149 Ohioans died from drug overdoses in 2016, a 36 percent leap from just the previous year and making Ohio the leader in the nation's overdose deaths. (Photo by Spencer Platt/Getty Images)</p>

Colorado and California-based lawyers for the county filed the suit Sunday in U.S. District Court of Colorado in Denver. They say the county has suffered economic damages of at least $750,000 already, and is expected to incur $1.5 million in further economic damages because of the drug companies’ actions.

The suit asks the court to find that the companies knowingly disseminated “false and misleading” statements about their drugs in violation of the False Advertising Law; to enjoin them from falsely marketing opioids in the future; to have the companies award the county thousands in damages, and to have them pay the county’s court costs.

“Absent each Defendant’s deceptive marketing scheme and improper distribution, opioid prescribing, use, misuse, abuse, and addiction would not have become so widespread, and the opioid epidemic that now exists would have been averted or much less severe,” the lawsuit says.

It says the companies, which include Colorado-based McKesson Corporation, “falsely” downplayed the risk of opioids and “grossly exaggerate[ed]” their benefits through “false advertising and unfair competition,” which “created or assisted in the creation of a public nuisance.”

The lawyers write that the approximately 6,400 people in Huerfano County would be protected from the manufacturers should the court find in its favor.

They say the companies switched their marketing and distribution campaigns in the late 1990s to persuade doctors and patients that opioids were the best treatment for people with chronic pain, and that they did so knowing their ideas “were not supported by or were directly contrary to the scientific evidence.”

The companies have been making upwards of $10 billion each year off opioid sales in recent years, the suit says, adding to their bottom lines “at the expense of chronic pain patients.”

Opioid overdose deaths actually fell 6 percent in 2016 to their lowest levels in Colorado in six years, after increasing from 2000 to 2015.

But heroin overdoses rose by 23 percent from the year before. Heroin overdoses have jumped by more than 750 percent in Colorado over the past decade-plus.

According to last year’s “Opioid Use in Colorado” report, 9 percent of prescriptions written were for opioids—down from 11.3 percent in 2013. But the number of babies in Colorado experiencing Neonatal Abstinence Syndrome from opioid withdrawals increase by 91 percent from 2012 to 2016. Opioid-related ER visits were up 141 percent since 2005, according to state data.

According to the Centers for Disease Control and Prevention (CDC), Colorado had one of the lower prescribing rates in 2016 among U.S. states, at 59.8 prescriptions written per 100 people.

But the suit says that Huerfano has been particularly impacted by the number of homeless addicts who now live in the area. It says that the drug companies’ marketing and distribution schemes has also brought people to the county for rehab services.

“Unscrupulous opioid rehabilitation businesses, including certain DOE Defendants, have recruited addicts nationally with false and misleading promises of the medically supervised rehabilitation to help addicts overcome their addiction,” it says.

But it says the for-profit rehab services have “failed to provide proper” services or facilities, have given addicts “substandard care,” and have even employed physicians whose licenses had been revoked.

The suit says the facilities “provide substandard care as long as there are third party payments available, and then throw them out of the facilities to be homeless in Huerfano County.”

It says that as such, the industry has put the burden to care for those addicts, and to resolve any of their criminal activity, on taxpayers of the county.

Though Huerfano County is the first in Colorado to file a suit of this nature, similar lawsuits have been filed by cities and counties across the country over the past several years.

Several of the companies named in the suit have paid massive fines for questionable opioid shipments, and though none could immediately be reached for comment Monday regarding the Huerfano County suit, most companies have denied the claims in similar lawsuits.

The state has also either unveiled or implemented several measures aimed at continuing to reduce the impact of the opioid epidemic in Colorado.

The Colorado Hospital Association last week released results of a pilot program aimed at reducing the number of opioids prescribed at 10 emergency departments across the state.

The state legislature also has a package of six bills backed by both parties aimed at opioid addiction treatment and prevention lined up for this session, and among those are a pilot program that would allow Denver to start a supervised injection site. Lawmakers recently traveled to Vancouver, British Columbia, Canada, to have a look at their supervised injection sites.