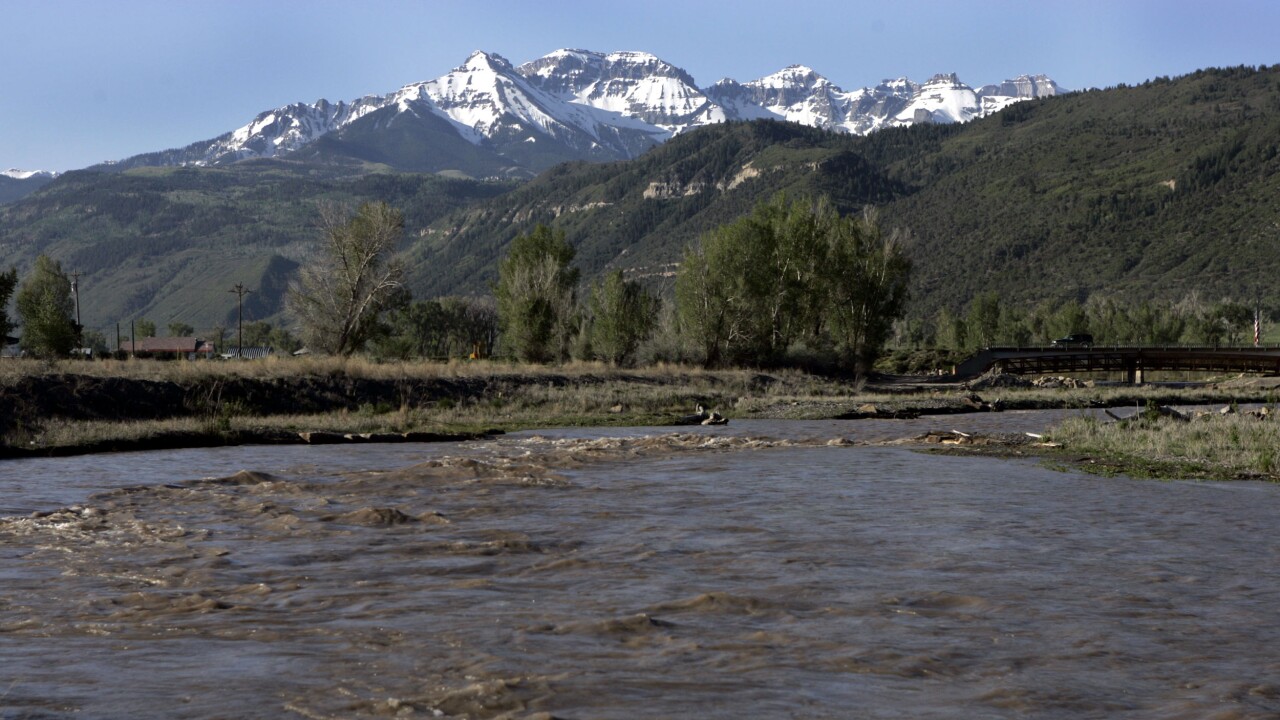 (Copyright 2020 The Associated Press. All rights reserved. This material may not be published, broadcast, rewritten or redistributed.)
ED ANDRIESKI/ASSOCIATED PRESS
A swollen Uncompahgre River snakes its way through farmland near Ridgway, Colo., Tuesday, May 24, 2005. The snow-capped San Juan Mountain can be seen in the distance. Runoff from melting snow has swollen rivers and streams throughout Colorado. (AP Photo/Ed Andrieski)

DENVER – The U.S. House of Representatives on Wednesday passed the Great American Outdoors Act, which will fully fund the Land and Water Conservation Fund and work toward ending a maintenance backlog at federal parks.

The bill passed the House in a 310-107 vote after passing the Senate in June in a 73-25 vote. The Senate version was sponsored by Sen. Cory Gardner, R-Colo., and cosponsored by Sen. Michael Bennet, D-Colo. It now heads to the president’s desk for his signature.

Gardner said the measure was the “most significant and historic conservation accomplishment in over 50 years” in a video message after the bill passed the House and said it would create “thousands of jobs” in Colorado.

“This is a great and historic day for conservation in Colorado and across this country,” he said.

“Today is a great day for our state thanks to all of the Coloradans who have worked tirelessly over the last decade to make fully funding LWCF a reality. I look forward to the president signing this bill into law, so that we can finally begin making critical investments in our forests, parks, and public lands,” Bennet said in a statement, adding that he hoped Congress would pass the CORE Act as well.

Ahead of the House vote, President Trump tweeted his support for the measure.

“We MUST protect our National Parks for our children and grandchildren. I am calling on the House to pass the GREAT AMERICAN OUTDOORS ACT today. Thanks @SenCoryGardner and @SteveDaines for all your work on this HISTORIC BILL!” Trump tweeted, tagging two of the senators up for re-election who have pushed the bill forward.

Gardner won approval from Trump and Majority Leader Mitch McConnel, R-Ky., to bring the measure to a Senate vote earlier this year as he faces re-election in November.

The full funding for LWCF has been a priority of many of Colorado’s members of Congress and environmental groups for years. They won permanent authorization for the program in 2019. The measure also includes funding to work to address what has become a $20 billion national parks maintenance backlog.

The LWCF is mostly funded from revenues generated by offshore oil and gas drilling.

Proponents say that the measure will also help bring more outdoor recreation opportunities to all parts of the country, but some opponents said they opposed the measure due to a Senate amendment that removed language about where land could be acquired from and over opposition to the government buying more federal land.

The LWCF was originally authorized by Congress for two 25-year periods, reauthorized for a two-year period between 2016 and 2018, and reauthorized again permanently with the president’s decision. But calls for the program to be fully funded as well began again not long afterward.

Colorado has received more than $265 million from the fund since the mid-1960s that has gone toward public land projects, acquiring land for conservation and building and restoring outdoor recreation facilities.

Gardner’s office said in June the LWCF will receive $900 million every year under the bill.

The measure also would establish a National Parks and Public Land Legacy Restoration Fund which would be put toward the backlog. For the next five fiscal years, the government would have to put into the fund 50% of federal revenues received from oil and gas, coal, or renewable resource energy development on federal lands and waters – capped at $1.9 billion per year.

Rep. Joe Neguse, D-Colo., said in a statement he was “thrilled” the measure had passed.

“Preserving our public lands, investing in our outdoor recreation economy and ensuring future generations can continue enjoying Colorado’s beautiful outdoors is an ongoing task, and we must continue to work to ensure the voices of our local communities are heard and our environment and lands are protected,” he said in a statement.

“Thrilled to see so many important land-protection bills getting through the House this week – first my Protecting America's Wilderness Act to protect 1.4 million acres in 3 states, then the CORE Act & now the Great American Outdoors Act. What a week! Let's keep it up!” Rep. Diana DeGette, D-Colo., said in a tweet.

“The Great American Outdoors Act will play a critical role in Colorado’s path to economic recovery by protecting our public lands, open spaces, and parks now and for decades to come. The president should sign this bill as soon as possible,” said Conservation Colorado Deputy Director Jessica Goad.

“We commend Congress and everyone who helped make this bill a reality. Our parks are national treasures that bring people together, from across the country and across the aisle,” said Theresa Pierno, the president of the National Parks Conservation Association. “The power of America’s national parks proved steadfast as Congress today ensured these places can continue to thrive for our children and grandchildren to experience for years to come.”

On Thursday, Ivanka Trump, who is President’s Trump daughter and adviser, will visit Rocky Mountain National Park with Interior Secretary David Bernhardt to discuss the Great American Outdoors Act. She will then join Gardner and others for a tour and roundtable at an unspecified child care facility.

Another measure sought by Democrats, the CORE Act, which first passed the House last year and would protect around 400,000 acres of public land in Colorado, was included Tuesday in the National Defense Appropriation Act by Neguse as an amendment, which passed the House Wednesday.