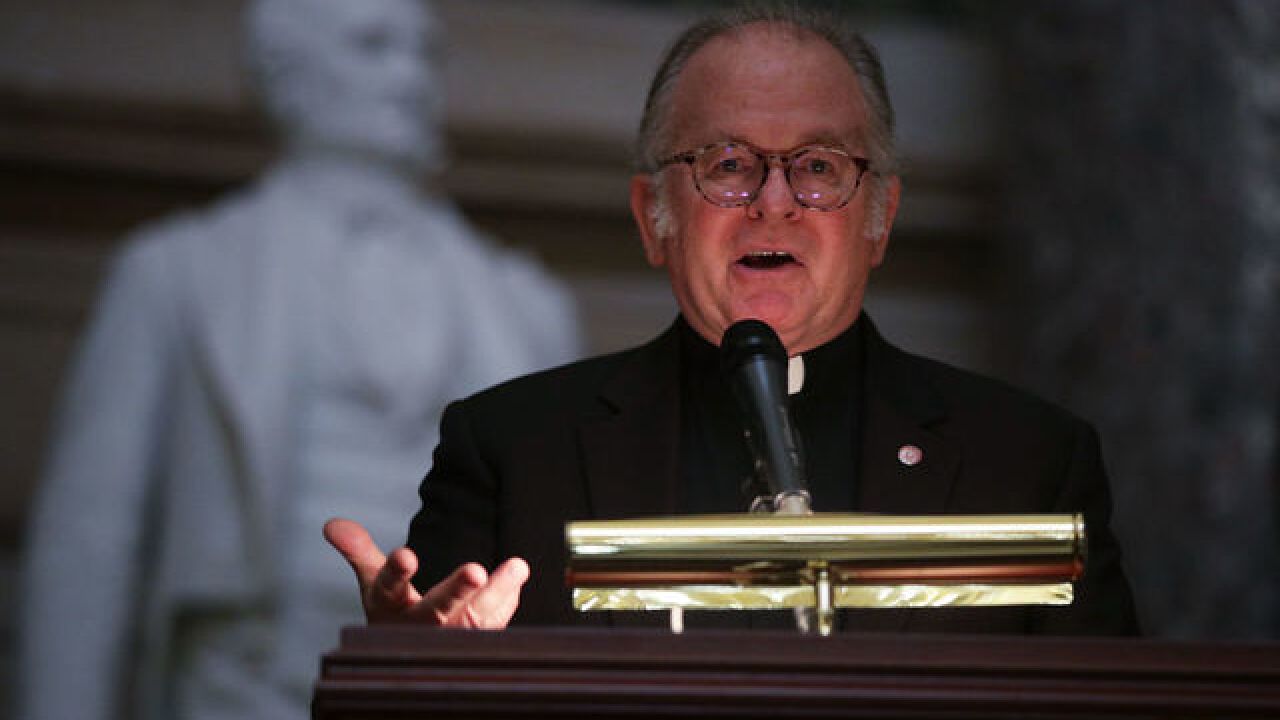 2017 Getty Images
Alex Wong
<p>WASHINGTON, DC - SEPTEMBER 27: The US House Chaplain, Father Pat Conroy, speaks during a memorial service at the National Statuary Hall of the Capitol September 27, 2017 in Washington, DC. The Association of Former Members of Congress held a memorial service honoring those members who have passed away in the past 18 months. (Photo by Alex Wong/Getty Images)</p>

Ryan told Republican lawmakers in a closed-door meeting that he forced Conroy out because he wasn't doing a very good job tending to the pastoral needs of lawmakers and that lawmakers had brought concerns to him.

But Ryan's office won't say why Conroy was asked to resign and he hasn't told rank-and-file Democrats why. It would be the first forced ouster of a chaplain in the history of the House.

"He had a number of complaints that the chaplain was not meeting the pastoral needs of the members in general," said Rep. Mike Coffman, R-Colo.

While Ryan has the support of most of the chamber's Republicans, many Democrats are upset about Conroy's ouster and say politics may be behind it. Democrats on Friday forced a vote on creating a special committee to investigate "the motivations and actions" behind Ryan's decision to fire Conroy but the move was killed by a party-line tally.

Top House Democrat Nancy Pelosi of California said on Twitter "Father Conroy's abrupt & unjust dismissal is hard to understand & impossible to support. In all his years of service, I've never received a complaint from our Members about him pastoring to the needs of the House."

Ryan consulted with Pelosi before making the move.

Democrats — and Conroy himself — have cited a prayer he offered last fall that called for fairness as the House debated tax cuts as a reason for GOP discontent with his performance.

Last November, Conroy prayed for lawmakers to make sure that "there are not winners and losers under new tax laws, but benefits balanced and shared by all Americans."

Conroy told the New York Times that shortly afterward Ryan warned him to "stay out of politics."

Mark Walker, R-N.C., has been tasked by Ryan to help find Conroy's replacement. He said he hopes to find "someone who has the instincts to go and minister to those that are hurting as opposed to someone always waiting (for someone) to come to them."

"He was essentially dismissed for praying and for this very gray and hazy representation that he was not ministering to some of the members," said Rep. Emanuel Cleaver, D-Mo., himself a clergyman. "Fairness and justice is an inseparable part of the Judeo-Christian theology."

Cleaver spoke at length with Conroy on Thursday. He also said Conroy's invitation of a Muslim cleric to deliver the opening prayer of a House session last year didn't help his standing.

"That apparently disturbed some of the members on the Republican side," Cleaver said.

Some Republicans were upset as well.

"I'm not aware of any discontent or any criticism and to be the first House chaplain to be removed in the history of the Congress in the middle of a term raises serious questions. We deserve more of an explanation and why. Was there political pressure?" said Rep. Peter King, R-N.Y. "The Speaker said it was just because certain people felt he was not complying with their requests or was not giving them good counseling. I never heard that from anyone."

Conroy has served as the chamber's chaplain since 2011 but offered his resignation last week at Ryan's urging. He will leave his House service next month.

"Some people in the Republican caucus didn't like an urban, broad-minded Catholic Jesuit, and they read into anything as political, even a prayer about fairness," said Rep. Gerry Connolly, D-Va.

Conroy's resignation letter said he was offering to step down at Ryan's request, calling his seven years of House service "one of the great privileges of my life."

The chaplain is responsible for opening the House each day with a prayer and offering counseling to lawmakers and aides on the House side of the Capitol. He appears at memorial services as well, including a service earlier this month for a former House staff aide in which he repeatedly mispronounced the former aide's name and referred to the aide's ex-wife as his wife.

Conroy is a Roman Catholic priest from the Jesuit order.