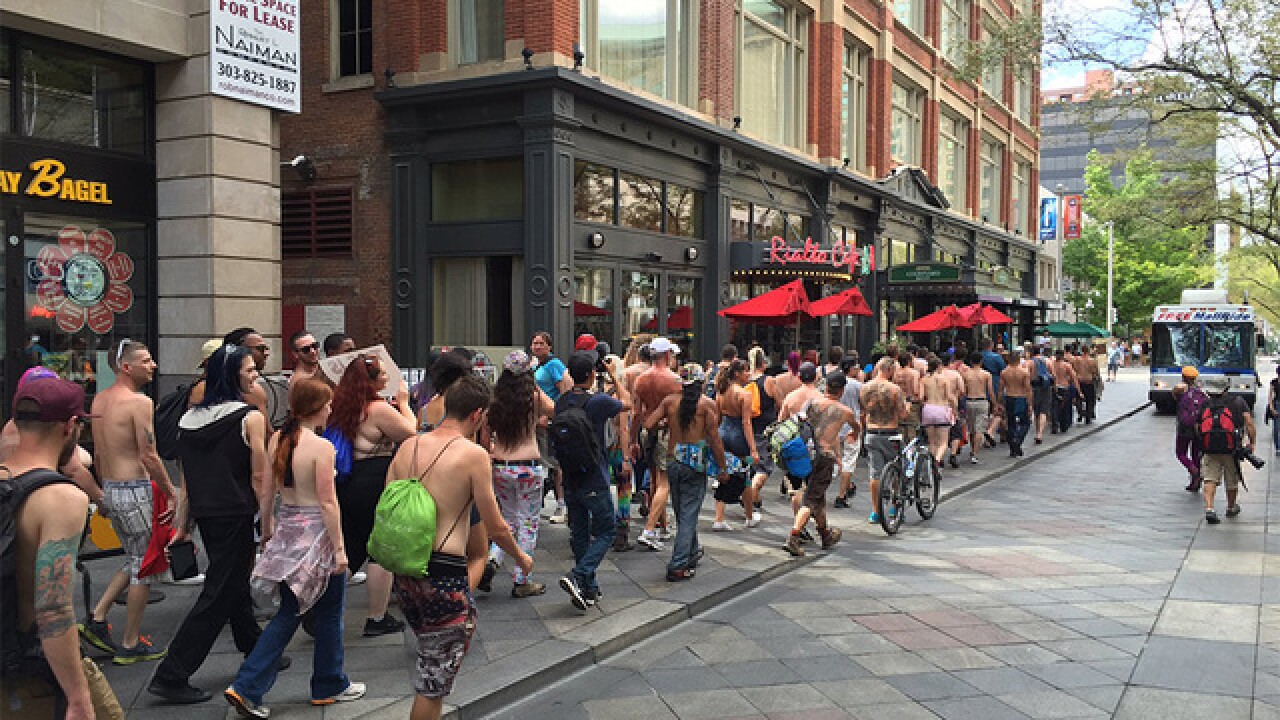 <p>Dozens of protesters gather at Civic Center Park for "Denver GoTopless Day 2016," which seeks to "stand up for women's right to go topless in public." (Photo/Denver7 reporter Russell Haythorn)  </p>

DENVER – What started out with a handful of bold activists seeking to spark a conversation about topless equality five years ago now brings over 1,000 people to the streets of downtown Denver.

On Sunday, organizers of GoTopless Day expect to draw just as many people – if not more – to the 16th Street Mall, hoping to again “show that men and women can embrace topless equality while promoting respect and healthy boundaries.”

Here’s everything you need to know about GoTopless Day 2018 in downtown Denver, taking place on Sunday, Aug. 26.

The march will begin at a different location than years prior

The meetup for GoTopless Day 2018 will be taking place at Skyline Park this year. The park is located at the intersection of 16th and Arapahoe Streets. From there, protesters will march down the 16th St. Mall to the Colorado State Capitol.

The celebrations start at 11 a.m., with the march to the Capitol building scheduled to take place at 2 p.m. The event is scheduled to go on for the next three hours after that.

Organizers said in the official Facebook event page that there will be live music as well as body painters. If you’re into getting body-painted, you’re asked to arrive early.

The lineup of the artists who will be performing live music at the event is available here.

There will also be a group photo opportunity of the attendees with the Colorado State Capitol building in the background, organizers said. Following the group shot, everyone will be asked to return to Skyline Park for more entertainment and for socializing.

GoTopless Day parades are taking place in over 25 cities across the world – from Seoul in South Korea to Valparaiso in Chile, according to the organization’s website. Nearly 20 events are scheduled to take place in the United States alone.

“It is only logical that GoTopless Day protests (or celebrations depending on the legal status of your city) would fall on Women's Equality Day since the right to go topless for women is based on gender equality as their right to vote once was,” a press release of the event states.

While female toplessness is not banned in Denver, cities like Fort Collins are still fighting to end the ban on toplessness after a three-judge panel had shown skepticism earlier this year about the difference between male and female breasts while listening to an appeals court hearing about women’s rights to go topless in that city, according to our partners at The Denver Post.