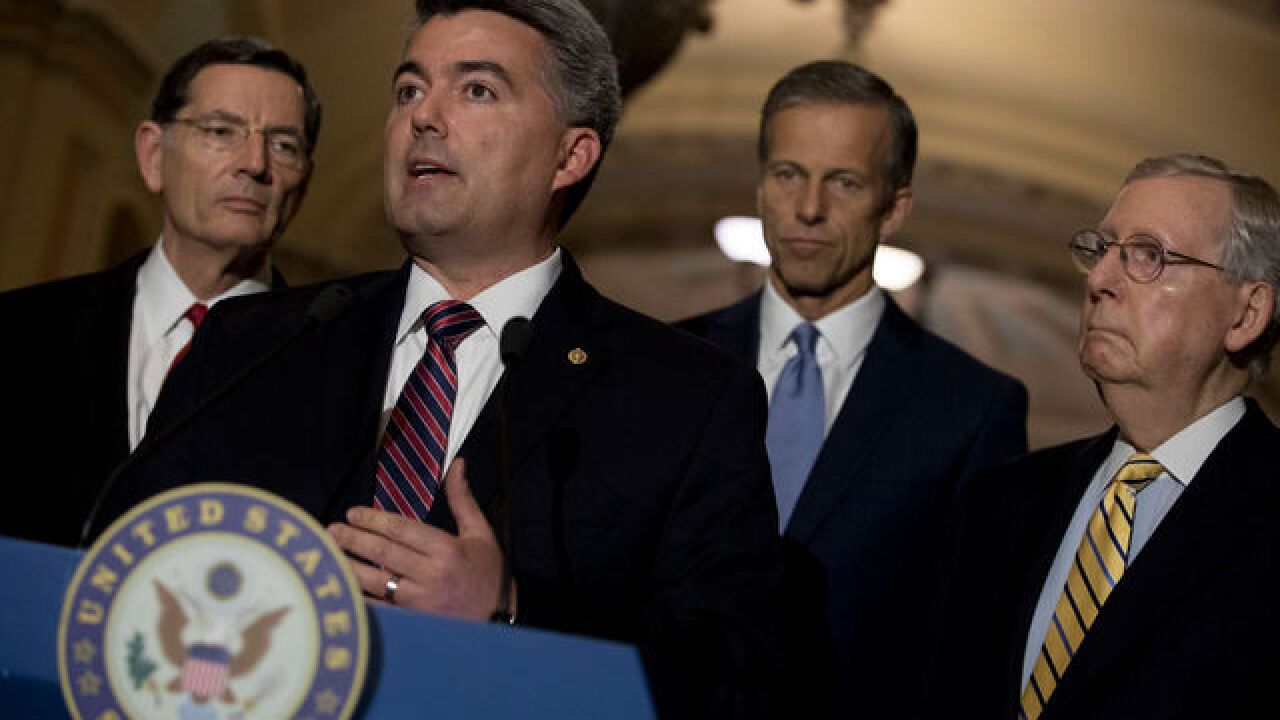 DENVER – Colorado Gov. John Hickenlooper on Friday joined several other Republican and Democratic governors in criticizing the House-passed version of the American Health Care Act, saying it does not adequately protect millions of Americans and needs fixing.

The letter was addressed to Senate Majority Leader Mitch McConnell and Senate Minority Leader Chuck Schumer. All the governors are from states that opted to expand Medicaid under the Affordable Care Act.

The governors say that the House-passed version of the bill “calls into question coverage for the vulnerable and fails to provide the necessary resources to ensure that no one is left out, while shifting significant costs to the states.”

The governors wrote that the provisions in the bill involving Medicaid were “particularly problematic.”

They said they were ready to work with senators “to develop a proposal that is fiscally sound and provides quality, affordable coverage for our most vulnerable citizens.”

The letter asks that Congress focus on “improving” the private health insurance system in the U.S., and says that the House version of the bill fails to protect “millions of Americans, including many who are dealing with mental illness, chronic health problems, and drug addiction.”

Hickenlooper’s signing on to the letter comes on the same day that he, Sen. Michael Bennet and Lt. Gov. Donna Lynne hosted a roundtable discussion on health care in Pueblo with more than a dozen other health care leaders, advocates and patients from across Colorado.

All Democrats, each said that the House-passed version of the AHCA would be bad for Colorado, and Bennet lamented the Senate’s procedures so far in crafting the bill behind closed doors.

“In Colorado, we have worked in a bipartisan and transparent way to improve our health care system, and we have had great success. But if this federal Republican bill is passed, hundreds of thousands of Coloradans could be hurt,” Hickenlooper said. “While we need reform, we can build from where we are to improve our health system.”

He said that several Coloradans who rely on Medicaid were in attendance, and voiced their concerns about the lack of transparency in the Senate process.

Lynne said the AHCA as-is would “take us backward” and back to a time where people could be discriminated against because of pre-existing conditions.

“This legislation does not meet the challenges of our health care system and puts coverage for too many at risk,” she said. “Coloradans deserve better.”

“The voices in today’s roundtable echoed the deep concern I’ve heard all over Colorado about the harmful effects the House-passed health care bill could have on our state,” Bennet said.

The concerns from Democrats come at a crucial moment for the AHCA, as the group of 13 Republican senators, including Gardner, continue to craft their bill in secrecy.

McConnell has said he hopes to vote on the bill before the July 4 recess, but Republicans have drawn the ire of most not involved in the meetings since it’s still unclear if Democrats or health care groups will ever see the bill’s text before a vote, or if the “restructured” bill will get a score from the Congressional Budget Office before another vote.

Gardner has been mostly mum on the bill, but in an interview with Colorado Politics published Friday, he said he wants to preserve protections for Medicaid recipients, which the House version gutted, and again said that the Affordable Care Act was “collapsing.”

He also told Colorado Politics that the Affordable Care Act was “passed in the most partisan of fashions” and that “not a single Republican vote was part of it,” despite Democrats holding months of open hearings while crafting the bill.

In February, Gardner himself said, “It’s important to me that this debate be open and that the American people see what’s happening and taking place,” according to a transcript from HuffPost. “I think as this committee hearings and legislation is being drafted, it’s not going to be something behind closed doors. Everybody is going to be a part of it.”

The state’s uninsured rate fell to 6.7 percent in 2015 after sitting at 15.8 percent in 2011, before the ACA, according to the Colorado Health Institute.

A so-called “glide path” has been pitched by Gardner and other Republican senators, which would shift some Medicaid recipients onto private health plans—something that differs from the high-risk pool coverage implemented in the House version.

But even this week, Gardner said he still hasn’t seen the text of the bill.

Gardner sent the following statement in response to this story and cited concerns over increasing premiums in parts of the state and a lack of providers on the Western Slope as reasons that the Affordable Care Act needs to be repealed and replaced with a new measure:

“Just last year, Colorado premiums went up nearly 21% on the individual market and 67% of counties in the state now have two or fewer insurers. We can disagree on what type of policies are needed to fix the broken system but anyone who looks at the facts will recognize Obamacare is not working. If nothing is done, this failed law will leave Coloradans with higher costs than ever before. It could also leave some with pre-existing conditions without any available insurance plans. I’m going to continue working with my Senate colleagues on legislation that strengthens Medicaid, protects people with pre-existing conditions, and allows Coloradans to have access to more affordable insurance plans.”

The secrecy also comes as Rep. Doug Lamborn, R-Colo., joined around 70 other House Republicans in asking the Senate to implement more pro-life rules in its version of the AHCA.

In a letter dated June 14, Lamborn and others wrote that “the pro-life majority in the House of Representatives has reached consensus that any health care legislation must abide by the overarching principle that abortion is not health care, and that therefore, elective abortion, abortion providers, and health plans that include elective abortion should not be subsidized.”

Lamborn has long been on a crusade to strip funding from Planned Parenthood, and is a major proponent of pro-life issues.

None of Colorado’s other members of Congress signed the letter.

What comes next for health care?

The Congressional Budget Office scored the House-passed version of the AHCA last month and found that 23 million fewer people would be insured by 2026 under the Republican plan as compared to under the Affordable Care Act.

The CBO also found that more than $800 billion would be cut from Medicaid funding over the next decade.

The Colorado Health Institute has said that removing the federal match in Medicaid funding would cost Colorado $907 million in the next fiscal year alone.

After the latest score was released, Gardner said that “Democrats and Republicans have a responsibility to put politics aside.”

The Colorado Consumer Health Initiative estimates that “at least” 600,000 Coloradans would lose health insurance under the plan as it currently stands, and also slammed the three Republicans from Colorado who supported the House bill—Reps. Ken Buck, Doug Lamborn and Scott Tipton—saying they “voted blindly.”

Monday is also the deadline for insurance companies operating in Colorado to file their rate requests with the state’s Division of Insurance.

Those filings could have huge ramifications in Colorado. Depending on the rate hike requests, and if Anthem decides to stay in Colorado, the coverage for people in more than a dozen Colorado counties could be up in the air.

Senate Republicans have been meeting with President Donald Trump bi-weekly to hash out their version of the AHCA, and say they will continue doing so.