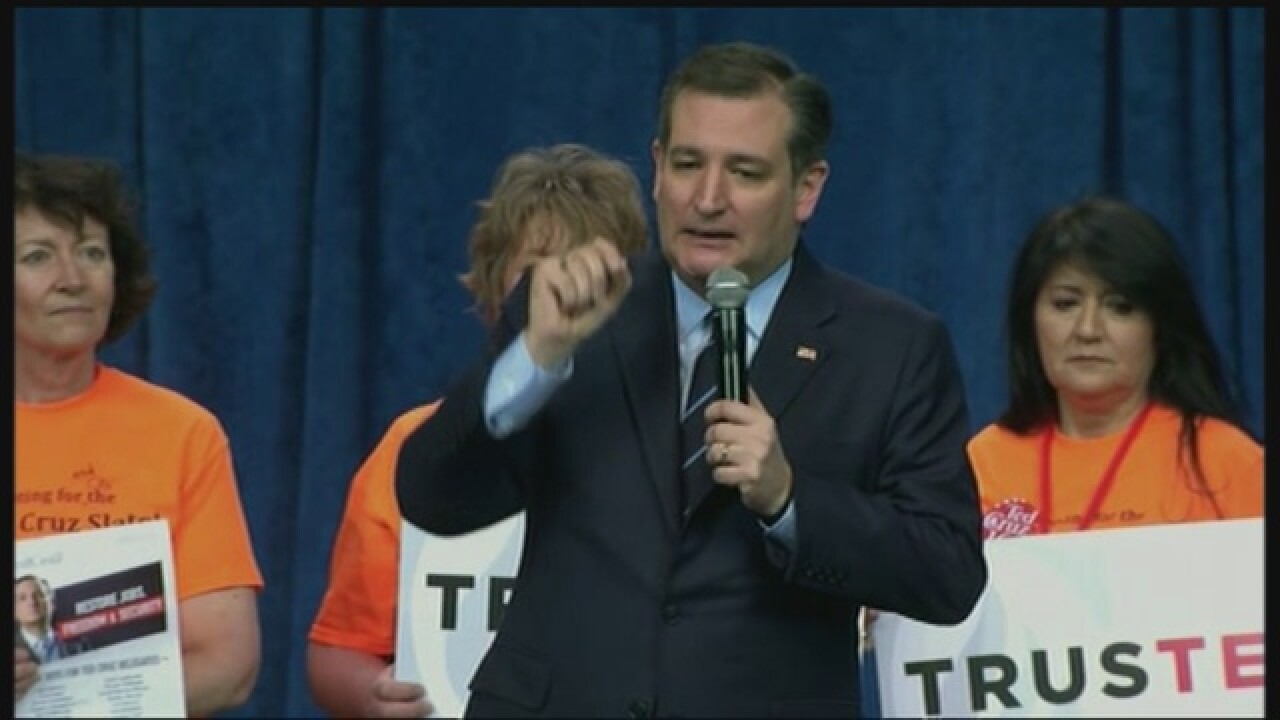 Colorado is holding its state GOP Convention at the World Arena in Colorado Springs. Of the 37 GOP delegates to go to the Republican National Convention (RNC) in Cleveland in July, the final 13 will be decided by Saturday night.

Prior to the convention, Republicans held assemblies for each of the state's seven Congressional Districts. At those assemblies, three delegates each were selected for the RNC. Ted Cruz won the support of all 21 of those delegates, although four were pledged as "unbound," they were part of a slate of delegates who said they would support Cruz.

"Even though you're getting the majority of the delegates from Colorado, how do you guarantee the support of Colorado is behind you?" asked Zelinger.

"The strength of our campaign from the beginning has been the grassroots," Cruz told Denver7. "In the last week, there have been seven elections here in the state of Colorado, in each of the seven Congressional Districts. A total of 21 delegates were elected. Of those 21, we won all 21."

As of 4:30 p.m., the nearly 600 delegates who want to get sent to Cleveland were still giving their 10-second speeches to the crowd.

Cruz was the only candidate who showed up to speak to the crowd. Donald Trump and John Kasich sent surrogates to speak on their behalf. Trump originally warned law enforcement that he would be in Colorado during the convention weekend, but he never told the party if he was officially coming to speak.

"I think the reason Donald didn't show up is he was scared, that he knew he wasn’t going to do well," said Cruz. "When he's scared, he runs away. I think anyone that is running for office, especially the office of President, owes it to the people to do what I'm doing; to come in front of the people, to speak to them, to look them in the eyes, to answer their questions, to ask for their support. This is at the end of the day, a job interview."

If he does well in his job interview, he will officially win Colorado and continue to prevent Trump from amassing enough delegates to be the nominee before the RNC.

"I am confident we are going to win in Cleveland at a contested convention," said Cruz.

He conducted his interview with Denver7 in front of multiple political signs that read: "Cruz: Jobs/Freedom/Security."

But how do marijuana laws in Colorado fit the three criteria?

"When it comes to drug legalization, personally, I would vote against marijuana legalization. If the state of Texas had a referendum on it, I would vote no. But, I think it is the prerogative of the states to make that determination. I think the people of Colorado have the right to make the decision that they've made under the Constitution, and as President, I would respect that right," said Cruz.

When asked if he agreed with Gov. John Hickenlooper on the need for a federal banking system for marijuana, he said he would research the topic and make a comment when he was more informed.