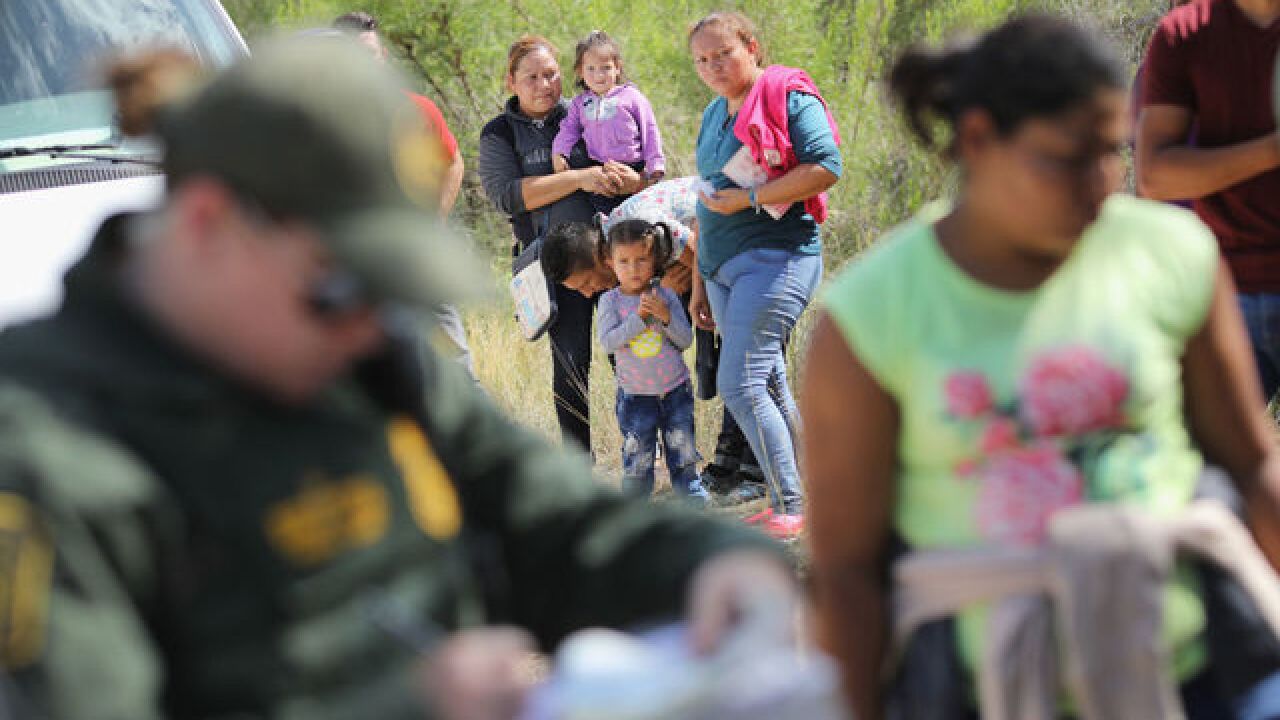 DENVER – As fervor over the separation of immigrant families at U.S. borders continued into Thursday after President Donald Trump’s vague executive order was signed Wednesday, Colorado lawmakers, faith leaders and political hopefuls from both sides of the aisle continue to hammer the issue.

The Department of Justice filed documents in court Thursday asking that the Flores settlement agreement be modified to allow the government to indefinitely detain immigrant children with their families and to exempt federal immigration facilities that house those families from state licensing requirements. The ask is one of the pillars of Trump’s executive order signed Wednesday, which will aim to keep families together who enter the country illegally “where appropriate.”

The Flores agreement as it is currently written prevents immigrant children from being detained for more than 20 days.

But there was concern from some of Colorado’s Democratic lawmakers that the order will do little, if anything, to reunite the 2,000-plus families who have already been separated under the Trump administration’s recently-enacted “zero-tolerance” policy that allows for the criminal prosecution of people who enter the country illegally for the first time.

U.S. Sen. Michael Bennet, D-Colo., late Wednesday sent a letter to Homeland Security Secretary Kirstjen Nielsen, who helped draft the executive order two days after claiming the policy didn’t exist, and Health and Human Services Secretary Alex Azar demanding answers as to what they planned to do to reunite the families that have already been separated.

“What is the administration’s plan for the thousands of children who are currently in detention facilities? Does the executive order apply to them? When will the administration reunite them with their parents?” Bennet queried in the letter, further saying that the Flores changes add the additional question of what will happen to children as their parents await prosecution.

“Today’s executive order may represent a pause in the administration’s cruel separation policy and ensuing self-inflicted crisis, but it is far from an enduring or humane resolution,” Bennet wrote. “Precipitous, highly-politicized policies like this one come at an enormous human cost. A photo opportunity is not a resolution. A mobilization of real resources and a comprehensive plan to reunite all of these children is the only solution that meets the standard of American values.”

Several of his fellow Democratic members of Congress from Colorado shared similar sentiments.

“Despite days of lies and misdirection, it is clear President Trump had the authority to stop these inhumane practices all along,” said Rep. Ed Perlmutter, D-Colo., saying that he was “ready to work” on a comprehensive immigration package but wouldn’t allow children or DACA to be used as a “bargaining chip” for more-conservative policies.

“Now these families will no longer be ripped apart, but warehousing them in detention centers is no solution,” said Rep. Diana DeGette, R-Colo., who also urged the passage of the Keep Families Together Act that Bennet is cosponsoring in the Senate and which Colorado’s Democrats have said they are supporting.

Rep. Jared Polis, after backing the measure earlier this week, on Thursday keyed his focus on an immigrant detention facility in Aurora, pointing to an inmate death that happened in December and writing a letter to U.S. Immigration and Customs Enforcement (ICE).

On Wednesday, Rep. Scott Tipton, R-Colo., said he did “not support separating children from their parents at the border” before Trump’s order was released and signed.

But he and two of his fellow Republican members of Congress from Colorado – Reps. Ken Buck and Doug Lamborn – voted for a conservative immigration bill Thursday that failed. House Republicans will try to pass a “compromise” bill on Friday, but its fate is uncertain as well.

Rep. Mike Coffman, R-Colo., was the lone Republican from Colorado not supporting the bill in Thursday’s vote. He also earlier this week said he’d reached out to the office of Sen. Dianne Feinstein, who is sponsoring the Keep Families Together Act in the Senate, and offered to introduce her bill in the House (a similar bill has since got a different sponsor, Rep. Jerrold Nadler, D-N.Y.), saying he was “open to all reasonable options” and saying the separation policy was “antithetical to the America I grew up in.”

He doubled down on Thursday, saying he was going to the border this weekend to see the separation facilities himself and calling for President Trump to fire aide Stephen Miller, who has been the loudest voice in anti-immigrant policy in the White House.

"I'm glad the President ended the border separation policy, but there's more work to do. I'm going to the border in TX myself this weekend to see the situation firsthand and learn more about what needs to be done. The President should put a General, a respected retired CEO or some other senior leadership figure on the job of making sure each and every child is returned to their parents," Coffman said in a series of tweets. "And the President should fire Stephen Miller now. This is a human rights mess. It is on the President to clean it up and fire the people responsible for making it."

But the “compromise” bill that is likely to get a vote Friday is widely seen as not having a chance to pass the Senate even if it passes the House. Bennet and Sen. Cory Gardner, R-Colo., pushed a comprehensive immigration bill in the Senate earlier this year they had worked on for months with a bipartisan group of senators, but it failed after new demands from Trump and the White House. Gardner supported other votes to get two different measures to the floor at the time as well, but all three measures ultimately failed to make it out of the Senate.

Gardner on Tuesday sent a letter to Nielsen and Attorney General Jeff Sessions asking them to stop the separation policy and calling for a Congressional fix, though it was an administration policy that Trump changed with Wednesday’s executive order. That request came before Trump’s order, but after days of outrage from Democrats, who introduced the Keep Families Together Act on June 8, immigrant organizations, faith leaders and some businesses over the order. Gardner’s spokesperson did not respond to a request for comment from Denver7 regarding whether he would support the Keep Families Together Act.

Meanwhile, the Colorado Independent reported Wednesday on some immigrants in Colorado who had been separated from their families and interviewed several mothers, and the Colorado candidates for governor were all asked about the separation policy at debates hosted earlier this week by Denver7 and The Denver Post.

At the Republican debate, Doug Robinson was the only candidate who outright said he didn’t support the separation policy, adding it’s “not who we are as Americans. It’s not who we are as Republicans.” A Magellan Strategies poll released in March found that 43 percent of likely GOP primary voters in Colorado said immigration was the top issue they were looking to candidates to address.

But Victor Mitchell said President Trump was “on the right track” to immigration reform with the policy, though he said the separation was a “sad outcome.” And Greg Lopez said it was something he didn’t want to see, but said he supported “that we’re following the rule of law” despite the separation rule being a policy and not a law.

Walker Stapleton, who came out with an ad Tuesday morning in which he said he’d “stand with Donald Trump to get illegal aliens who commit crimes deported” and called Denver a “sanctuary city,” did not directly address Trump's policy when asked at Tuesday's debate, though he said the “last thing” anyone wants to see is families broken up and said he agreed with what the president has done in regards to immigration reform.

He was asked about the policy again Thursday morning in an interview on KOA News Radio, and though he said it was “horrible” and something “no one wants to see,” he blamed the courts, Democrats and Congress for the policy and said that the Obama administration had similar policies in place—something NBC News reported was false.

“Courts and Congress have really put our country in an impossible situation of choosing between open borders and separating families … I think there’s plenty of blame to go around, but I think the bottom line is Congress must fix this,” he said. When asked if he supported the president’s executive order, he said, “Sure!”

Also Thursday, the Colorado Governor’s Clergy Council—comprised of 25 religious leaders in the state—issued a statement calling for further action from Congress to address the separation issue and for other state faith leaders to join them.

“From all different faiths, we can agree that the policy and practice of separating children from their parents is wrong and destructive on a number of levels. To use sacred texts to justify it is even worse,” the council said in a statement. “We encourage faith leaders to speak openly and honestly about these issues in their services over the coming weeks. We hope the faithful will look for opportunities to add their voices to this conversation and reach out to those who respect us in Congress. Our hope and prayer is that our Federal Government will act quickly and decisively to ensure that the most vulnerable are cared for and protected.”

Despite the lack of clarity as to exactly what Trump’s executive order meant and what Congress might do to further address the issue, federal prosecutors dropped charges against 17 immigrants who had been due to be sentenced Thursday, but it was unclear where they would be housed or if they would be reunited with their children, the Associated Press reported.