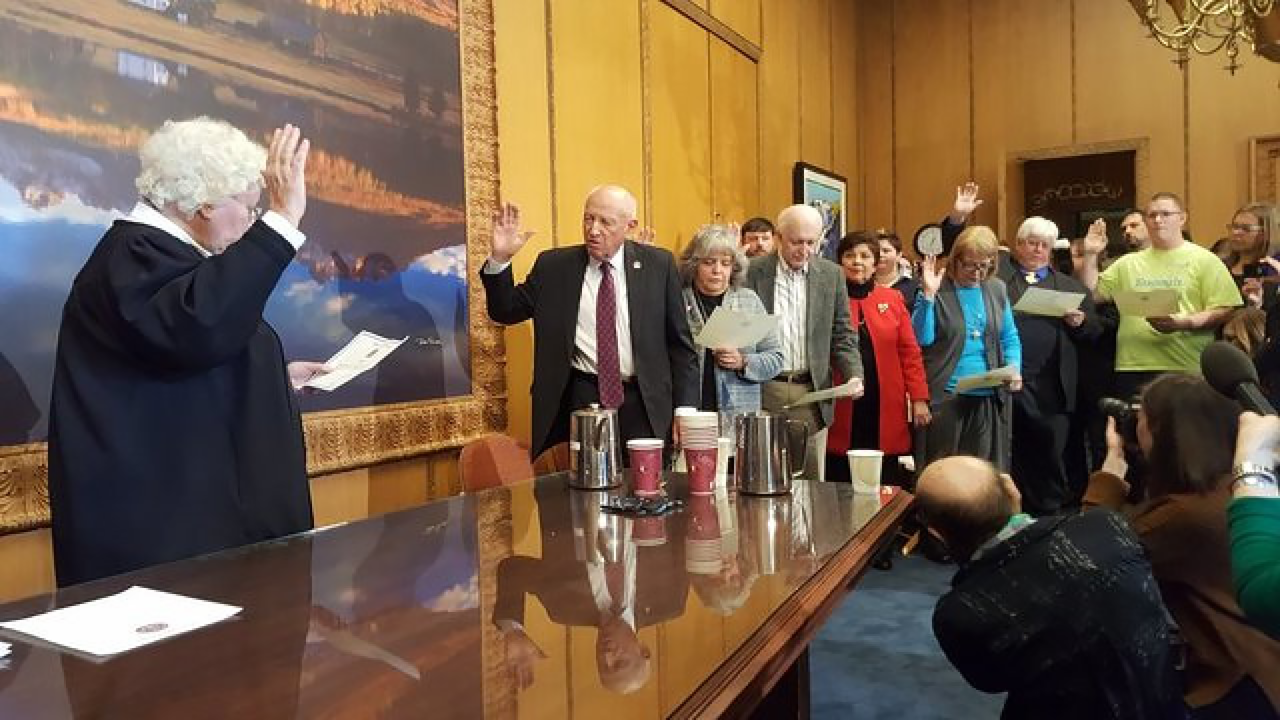 Copyright 2019 Scripps Media, Inc. All rights reserved. This material may not be published, broadcast, rewritten, or redistributed.
Denver7
Colorado’s electors do not have to follow state rules and vote for the presidential candidates who received the most votes in the state, the 10th U.S. Circuit Court of Appeals in Denver ruled on Tuesday.

DENVER – Colorado’s electors do not have to follow state rules and vote for the presidential candidates who received the most votes in the state, the 10th U.S. Circuit Court of Appeals in Denver ruled on Tuesday.

The court’s 2-1 ruling against the Colorado Secretary of State’s Office could have major effects on future presidential elections if it stands.

Polly Baca and Nemanich – after several last-minute court decisions – ended up writing Clinton’s name on the ballot. But the three had vowed to fight the rules from Williams’ office.

“I will sign the oath because I want to vote. But it is under duress because I don’t believe this vote is constitutional,” Polly Baca said at the time.

Polly Baca and Nemanich sued the Colorado Department of State, but a U.S. District Court of Colorado judge dismissed the lawsuit in August 2017 after costing state taxpayers more than $40,000 .

They and Micheal Baca filed a new suit 12 days later alleging their constitutional rights had been violated when they were forced to vote for Hillary Clinton. They came to an agreement with the secretary of state’s office that allowed them to argue to the state statute was unconstitutional.

The district court dismissed the case in April 2018.

In the majority’s ruling on Tuesday, the 10th Circuit ruled that the U.S. Constitution contains no language that allows a state to remove an elector or toss out his or her vote.

“Constitutional provisions grant states the plenary power to appoint its electors. But once that appointment process is concluded, the Constitution identifies no further involvement by the states in the selection of the President and Vice President,” Judge Carolyn Baldwin McHugh wrote in the majority opinion. “Even where an elector violates a state-required pledge to vote for the winners of the state popular election, there is nothing in the federal Constitution that allows the state to remove that elector or to nullify his votes.”

“In the absence of such express authority, the states may not interfere with the electors’ exercise of discretion in voting for President and Vice President by removing the elector and nullifying his vote,” she added. “Secretary Williams impermissibly interfered with Mr. Baca’s exercise of his right to vote as a presidential elector.”

Judge Mary Beck Briscoe wrote the dissent in Tuesday’s decision that she felt the case was moot because she felt the court could not grant relief to the plaintiffs under the law.

Supporters of the three electors, including their Equal Citizens attorneys Lawrence Lessig, of Harvard Law, and Jason Harrow, as well as Denver-based Jason Wesoky, called the ruling a “landmark opinion” and said the case would likely head to the U.S. Supreme Court because it differs from a recent Washington Supreme Court decision.

The attorneys say they plan to ask the U.S. Supreme Court to hear the case and have a decision by next summer.

“This is an incredibly thoughtful decision that could advance substantially our campaign to reform the Electoral College,” Lessig said in a statement. “We know Electoral College contests are going to be closer in the future than they have been in the past; and as they get closer and closer, even a small number of electors could change the results of an election. Whether you think that’s a good system or not, we believe it is critical to resolve it before it would decide an election.”

Meanwhile, Colorado Secretary of State Jena Griswold, who defeated Williams in November, said her office’s attorneys would be reviewing the decision. But she said it could have “dangerous” ramifications.

“This court decision takes power from Colorado voters and sets a dangerous precedent,” Griswold said in a statement. “Our nation stands on the principle of one person, one vote. We are reviewing this decision with our attorneys, and will vigorously protect Colorado voters.”

Among the things the ruling could theoretically affect would be Colorado’s entering into the National Popular Vote Interstate Compact this year.

If states that have 270 total electoral votes all join the compact, each state would award all of its electoral votes to the winner of the popular vote for president. Griswold supported that measure, saying it upheld the “one person, one vote” principal. But opponents of the measure have pointed to the law as reasons to try and recall several Democratic lawmakers, and a group earlier this month submitted more than 227,000 signatures as part of a ballot petition to try and get the law repealed.