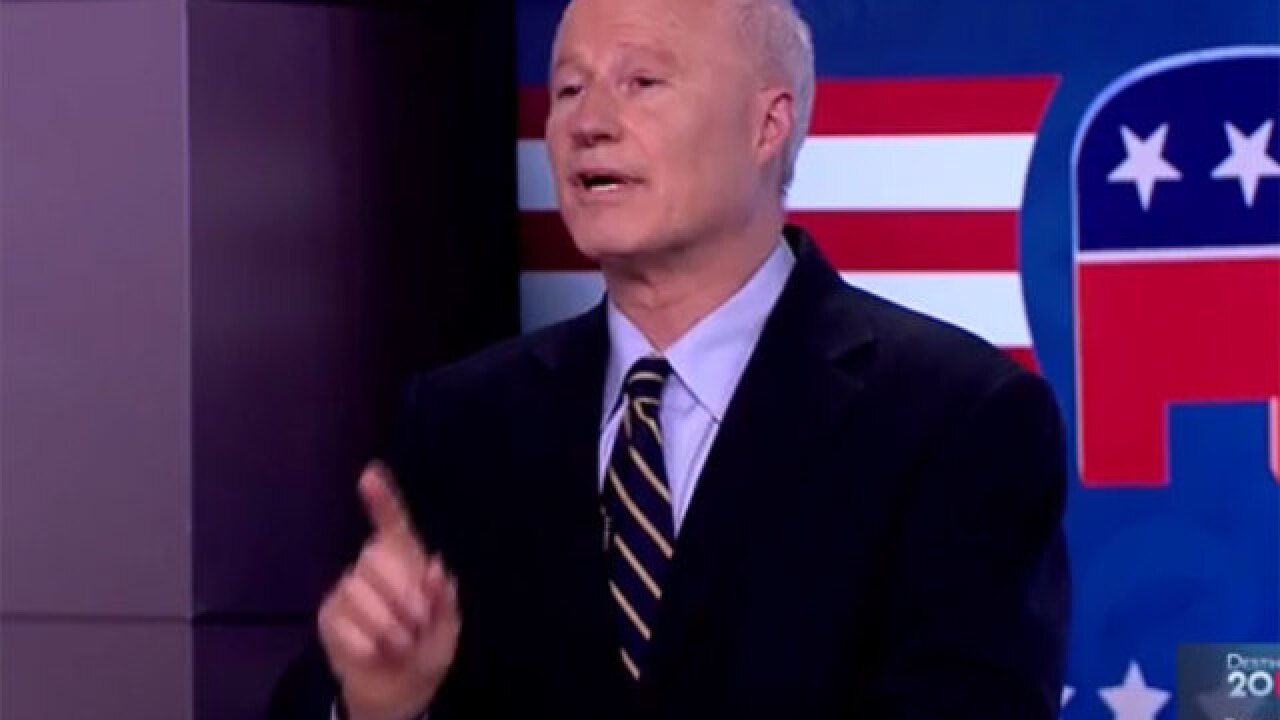 In a recent news release, Carroll's camp accused Coffman of saying "stop the deportations" while speaking Spanish in the Univision debate on Oct. 4 and then flip-flopping to say "you're going to be deported," while speaking English during a KUSA-TV interview two weeks later.

"Mike Coffman can lie in whatever language he wants, but it's clear that Mike Coffman will say or do anythincig to hold on to his job," said Carroll campaign spokesman,Drew Godinich in the release.

The dispute captures the bare-knuckle battle for Colorado’s 6th Congressional District, which rings Denver’s eastern suburbs and is one of the most competitive swing districts in the nation.

In recent years, Coffman moderated his once-hardline positions on immigration after the district, formerly a conservative bastion, was redrawn in 2012 and became the most politically and ethnically diverse enclave in Colorado. He learned Spanish and has worked to reach out to Hispanic and Muslim constituents and attend Ethiopian community festivals.

But Carroll, a state senator, and her Democratic allies have worked just as hard to remind voters that in 2010 Coffman said, "The DREAM Act will be a nightmare for the American people," as he voted against the bill to give children brought into the country unlawfully a path to citizenship if they attended college or served in the military. And they recall that Coffman supported doing away with bilingual ballots in 2011, saying non-English speakers ought to "pull out a dictionary" when they are at home reviewing their mail-in ballots.

We looked closer at the claim that a Spanish-speaking Coffman said "stop the deportations" in the Univision debate and then warned undocumented immigrants, "you're going to be deported," while speaking English in a KUSA-TV interview. (Coffman's immigration comments start at 7:09 in the KUSA interview).

Coffman has recently made comments on TV programs with English-speaking audiences that we need tougher border security and immigration enforcement and, at some point in the future, undocumented immigrants need to be deported.

But Coffman clearly states -- in Spanish and English TV appearances -- that he advocates a "path to permanent residency" for young immigrants who were brought here as children. And for longtime, undocumented adult immigrants who haven't violated criminal laws, he supports a grace period of three-to-six months where they could "come out of the shadows" and gain legalized status that would allow them to live and work here "without fear of deportations."

Here's the Carroll campaign's news release translation for Coffman's Spanish comments on immigration (with a section they highlighted in bold): "I think that as a part of an immigration reform, we should create a (period) of time that allows those who have not broken any other law other than immigration laws to come out of the shadows, obtain documentation that allows them to work in our country without fear, to stop the deportations."

Óscar A. Contreras, a digital producer for PolitiFact partner Denver7 checked the Carroll campaign's Spanish translation of Coffman and found a brief but noteworthy error. Coffman said he supported immigration reform that would create a time period for undocumented immigrants who have not broken criminal laws to come out of the shadows and obtain documentation that allows them to work in our country "without fear of deportations." He did not say, "stop the deportations," as the Carroll camp’s translation stated. (Coffman's Spanish comments on immigration begin at 6:55 in the Univision debate)

As the Carroll campaign noted, when Coffman was asked what should be done with unlawful immigrants in the country, he replied, "I think we need to go to a system...where we have tough enforcement. Where if you're here illegally, you're going to be deported."

Yet, Coffman stressed, "My sympathies are really with the children (whose parents are unlawful immigrants). The children that were taken here when they were young, who grew up here, who really know no other country but the United States."

He talked about how he's worked to help these young people by introducing legislation, including a 2013 bill, the Military Enlistment Opportunity Act, which sought to provide immigrant children an opportunity to serve in the U.S. military and gain a path to citizenship. On Univision and KUSA, Coffman said he supports giving these young immigrants a path to permanent residency and citizenship based on their education, work history or military service -- which sounds similar to the DREAM Act he once voted against.

What about unlawful adult immigrants?

"I think for the adults, what I would like to see is to give them a period of time to come out of the shadows (and) as long as they haven't violated criminal laws, to give them a legalized status that would allow them to work here without fear of deportation," he told KUSA. This echoes Coffman's Spanish debate comments where he proposed a grace period where noncriminal adult immigrants could "obtain documentation that allows them to work in our country without fear of deportations."

Asked about Republican presidential nominee Donald Trump's "mass deportation plan" at a recent KUSA debate, Coffman said, "I think that's the system we ought to move to." Once his proposed grace period ends, Coffman said: "I would like to see us move to a much tougher system after that point in time. We have to get control of our borders."

Coffman campaign spokeswoman Cinamon Watson said his opponents continue to mischaracterize his support for immigration reform. She cited news coverage of how the congressman has clashed with fellow Republican lawmakers and earned praise from some Democrats on reform.

The Carroll campaign says Coffman said "stop the deportations" while speaking Spanish in a Univision debate and then shifted to saying "you're going to be deported," while speaking English during a KUSA interview.

Technically, Coffman said in Spanish that he supported reform that would allow noncriminal adult immigrants to obtain documentation to work in the United States "without fear of deportations" -- not "stop the deportations," as the Carroll camp’s translation stated.

The Carroll campaign is correct that Coffman said, "If you're here illegally, you're going to be deported" during the KUSA interview. But he also backed off that hardline position and emphasized his support for providing legal status to noncriminal adult immigrants and young people who were brought here as children who have lived here for years.

Carroll can accuse Coffman of trying to be all things to all people, but her news release left out that he maintained -- in Spanish and English -- his reform goal of ensuring that noncriminal immigrants have an opportunity to live and work here "without fear of deportations."

We rate this claim Mostly False.

Denver7 and PolitiFact.com are teaming up on fact-checking political claims this election year.