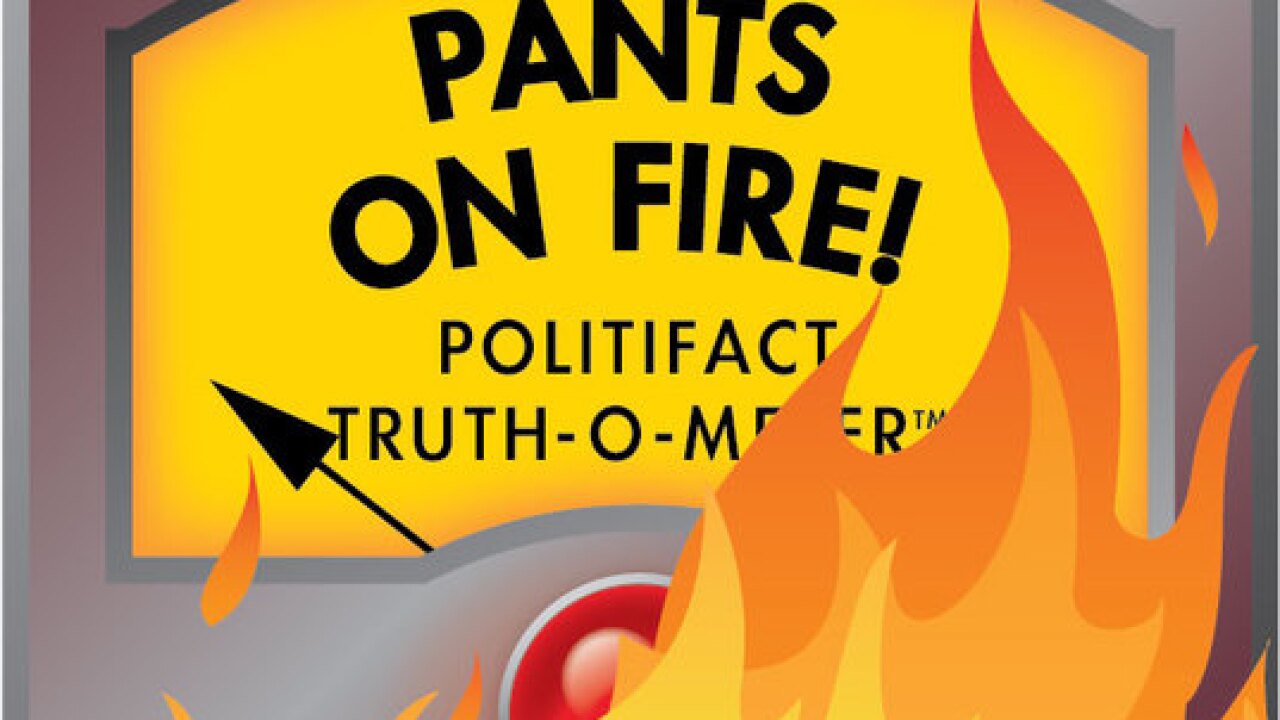 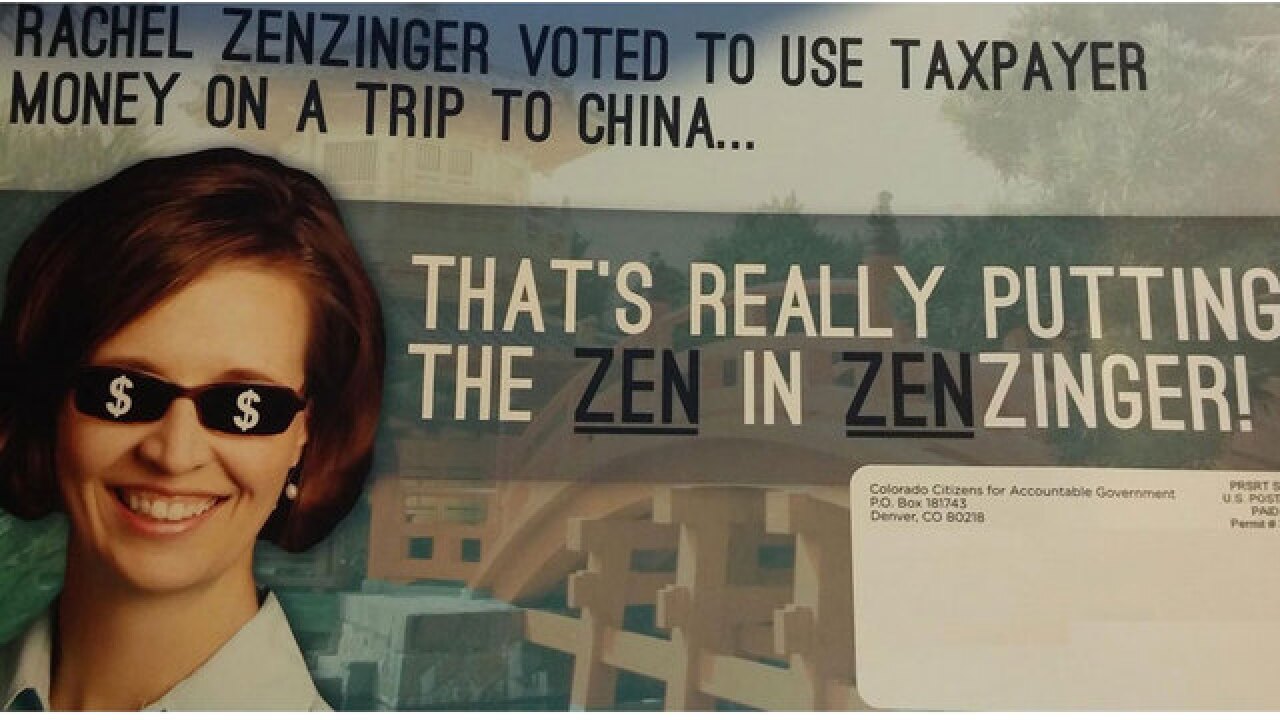 For the second straight election, a conservative group has attacked a Democratic Colorado state Senate candidate with the same claim: "Rachel Zenzinger voted to use tax dollars to take a taxpayer-funded junket to China."

In late June, political mailers started arriving at homes in the northwest Denver suburbs of Senate District 19. They featured a photoshopped image of a smiling Zenzinger wearing sunglasses with dollar signs on the lenses and an ornamental Asian bridge in the background.

"While serving in the city council, Rachel Zenzinger voted to use tax dollars to take a taxpayer funded junket to China," the mailer said.

The back of the mailer showed a pagoda and elaborated on the claim, saying, "Zenzinger couldn’t be trusted with taxpayer money on the city council -- we definitely can’t trust her to oversee $26 billion in the State Senate."

The mailers were produced by Colorado Citizens for Accountable Government, a  conservative 527 political group. 527s are tax-exempt entities (organized under section 527 of the Internal Revenue Code) that can collect unlimited donations and influence a political issue, policy, appointment or election. But to maintain nonprofit status, the groups cannot expressly advocate that people vote for or against a candidate, according to the Sunlight Foundation.

The same group attacked Zenzinger for a taxpayer-backed junket to China in 2014. But just as before, there are key problems with these attacks.

"I’ve never been to China," Zenzinger told PolitiFact. "I was joking to friends, believe me if I had been to China, I would have had so many pictures on Facebook they wouldn't have to Photoshop my picture in the ads."

Also, while on the Arvada City Council in 2013, Zenzinger made -- and then voted for -- a successful motion explicitly prohibiting use of taxpayer funds for a proposed sister-city delegation to China.

No city officials ever went on the trip. But you wouldn’t know that from this mailer, or a 2014 TV ad called "China Girl" that targeted Zenzinger, who was running to hang onto her Senate seat.

Zenzinger had been appointed in 2013 to the District 19 seat to replace Democratic Sen. Evie Hudak, who resigned in the face of a recall effort by gun-rights groups angered by gun-control laws passed by Democratic lawmakers after the deadly mass shooting at an Aurora movie theater in 2012.

Zenzinger lost the election by 663 votes to Republican candidate Laura Woods — a defeat she blames on the misleading TV ad and mailers with the same misleading theme. Now Zenzinger is running in a rematch against Woods.

"I would knock on people's doors and they'd be like, 'Oh yeah, you went to China,’ " she said.

So if there was no trip, what is the mailer talking about?

As evidence, Colorado Citizens for Accountable Government emailed PolitiFact a brief excerpt from the minutes of an Arvada City Council meeting on April 1, 2013.

Council members were discussing an invitation from the mayor of Arvada’s sister city, Jinzhou, China, to send an official delegation from Arvada to the 2013 World Landscape Art Exposition. A nonprofit group, Arvada Sister Cities International, recommended that the invitation be accepted and that an official delegation -- including Arvada city officials, members of the local Chinese Chamber of Commerce and Arvada Sister Cities -- attend the Jinzhou expo.

Councilman Bob Dyer made a motion to accept the group’s recommendation and send a delegation to Jinzhou, according to the meeting minutes.

Before the vote on the motion, the 527 group points out, Mayor Marc Williams said he was uncomfortable using public funds on the trip.

The mayor said "since he understands the motion includes sending delegation members from the city at city expense, he cannot support it," according to the minutes. However, he said he would back sending Zenzinger as the elected representative if her travel was privately funded.

Zenzinger voted for the Dyer motion to send a delegation, but it failed, 4-3.

Yet that wasn’t the end of the meeting. The group attacking Zenzinger left out what happened next.

Zenzinger then made her own motion, saying if a city delegation was sent, the money must come from a non-city source.

Zenzinger’s motion passed on a 5-2 vote.

Ultimately, no city officials or employees went to China because no private funding was found.

Several people who were at the council meeting on the China delegation proposal blasted the attacks on Zenzinger.

"I'm appalled by that because it besmirches Rachel Zenzinger's reputation and it's made out of whole cloth. There's just nothing there. She didn't vote to send herself on a junket and she didn't go on a junket," McGoff said.

Participants paid their own way on previous sister city trips, including a 2008 delegation when two councilmembers and the city manager went to Jinzhou (before Zenzinger was on the council), Gordon said. Even the local Arvada Sister Cities group’s members paid for their trips.

Williams, the mayor, has a different view of Zenzinger’s initial vote in favor of Dyer’s motion to "send a delegation to Jinzhou."

"Did she support a motion that would have funded through city funds the opportunity for her to go? Yes, she did," the mayor said. But he stressed that she also made the subsequent successful motion "with the explicit direction that no city funds be used."

"My negativity toward their ad is that it implies that she actually took that trip, and she didn’t," Williams said.

Zenzinger disagrees with the mayor’s interpretation.

"Yes, I voted to approve an ‘official’ delegation, which meant that an elected official would make the trip," Zenzinger said in an email. "The funding for the delegation was not addressed until the subsequent vote."

"Mayor Williams’ comments about funding, even though they were not relevant to the original motion, prompted me to make a second motion that clarified and distinguished that this delegation would receive no funding from the city," Zenzinger added.

Colorado Citizens for Accountable Government did not respond to additional requests for comment from PolitiFact.

In a political mailer, Colorado Citizens for Accountable Government stated, "While serving in the city council, Rachel Zenzinger voted to use tax dollars to take a taxpayer funded junket to China."

As of a member of the Arvada City Council, Zenzinger did vote on a failed motion to send an official delegation to a sister-city event in China.

This hardly supports the political group’s accusation. Not only did Zenzinger initiate a successful motion explicitly prohibiting use of taxpayer funds for the delegation to China, she never even went to China!

The attack is a gross distortion of the facts. We rate the claim Pants on Fire!