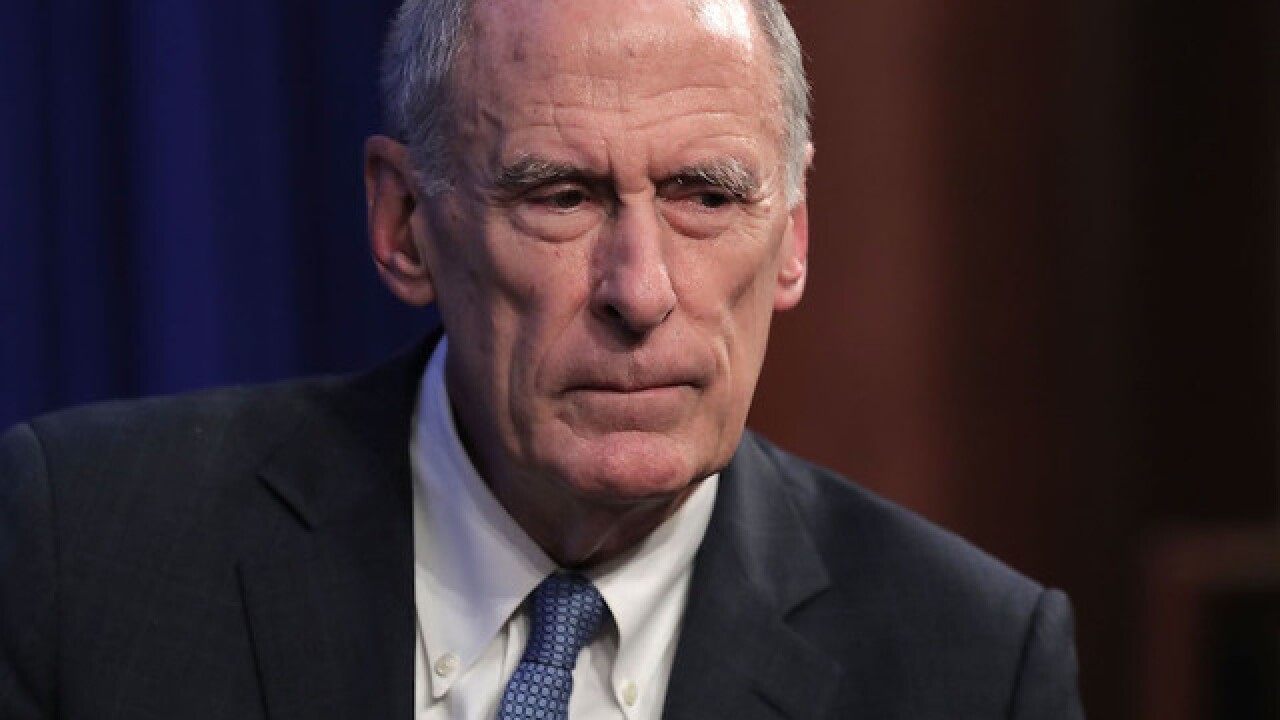 Copyright Getty Images
Chip Somodevilla
<p>WASHINGTON, DC - OCTOBER 13: U.S. Director of National Intelligence Dan Coats prepares to deliver remarks, arguing for the renewal of Section 702 of the Foreign Intelligence Surveillance Act at the Heritage Foundation October 13, 2017 in Washington, DC. The conservative think tank hosted national security leaders for a seminar about the controversial 702 provision, which authorizes the government to conduct warrantless electronic surveillance to collect, use and disseminate communications stored by U.S. internet service providers, among other things. (Photo by Chip Somodevilla/Getty Images)</p>

Director of National Intelligence Dan Coats made that surprise admission Thursday in his first public comments since rebutting Trump's questioning of the U.S. intelligence assessment that Russia interfered in the 2016 election.

Speaking at the Aspen Security Forum in Colorado, Coats tiptoed around any potential conflict with his boss, but was upfront about some of his misgivings, saying that he wished Trump had made different statements Monday in Helsinki after meeting Putin.

Coats, who is charged with overseeing the nation's 17 intelligence agencies, also said that if he had been asked, he would have advised Trump against meeting Putin alone, with just interpreters.

"I don't know what happened in that meeting."

Coats said he was just doing his job when he quickly issued a statement Monday after the president appeared to give credence to Russia's denial of election interference. In that statement, Coats restated the U.S. intelligence assessment about Russian meddling and Moscow's "ongoing, pervasive efforts to undermine our democracy."

"I just felt, at this point in time, that what we had assessed and re-assessed, and reassessed ... still stands and that it was important to take that stand on behalf of the intelligence community and behalf of the American people," Coats said.

As he spoke, news was breaking out of Washington that Putin had been invited to the White House this fall. NBC's Andrea Mitchell, who was moderating the event, shared the development. Coats said it was news to him.

"Say that again," Coats said, cupping his hand over his ear.

He took a deep breath and continued, saying: "OK."

"That's going to be special," he said, prompting laughter from the audience.

Coats, who has criticized Russia for years, has had to clash loudly with Trump's pro-Kremlin remarks, leaving the soft-spoken spy chief in a tight spot. Asked how he deals with Trump's conflicting statements about Russia, Coats said: "This is the job I signed up for."

The former Republican lawmaker was banned from traveling to Russia in 2014 for calling out its annexation of Crimea. He has continued to raise the alarm on Russia since his appointment by Trump as intelligence chief in March 2017.

He said he understood what Trump was saying when he noted earlier this week that "others" could be to blame for trying to meddle in U.S elections because other adversaries have the capabilities to do so. But he stood firmly with the intelligence assessment, saying it's "undeniable" that Russia has taken the lead on this kind of interference.

As with other Trump administration officials attending Aspen, Coats was asked whether he ever considered resigning from what has been a volatile Trump presidency.

Coats didn't answer the question directly. He said when he has frustrating days, he reminds himself about why he agreed to accept the job and what he hoped to accomplish.

"As long as I'm able to have the ability to seek the truth and speak the truth, I'm on board," Coats said.

Trump has had a tense relationship with U.S. intelligence agencies since before he was elected — largely because of their conclusion that Putin ordered "an influence campaign" in 2016 aimed at helping the Trump campaign and harming his Democratic opponent, Hillary Clinton.

Earlier in the administration, Coats' voice was drowned out by the more outspoken Mike Pompeo, who was CIA director before Trump tapped him as secretary of state. Now with Pompeo heading the State Department, Coats has been thrust into the limelight as the voice of the intelligence community.

On other issues, Coats said only time will tell if North Korea will be willing to give up its nuclear weapons program.

Coats said U.S. intelligence on North Korea was significantly better than it used to be, but that the U.S. should not assume it will happen and that "trust and verify" should be America's mantra.

National Security Adviser John Bolton has suggested that North Korea could denuclearize in a year. Coats said Thursday it's "technically possible" but that it "probably won't happen."

Coats noted that Pompeo has projected a longer time frame.

He also said that North Korean exports have declined dramatically, putting economic pressure on North Korean leader Kim Jong Un. He says with that pressure on him, why shouldn't the U.S. go forward and see what happens.

Coats was asked if there is a risk that nerve agent poisonings in Britain that have been blamed on the Russians are possible in the United States. "It's a risk," Coats said of the poisonings, which Russia has denied. "The Russians do bold things, extraordinary things. ... If you think the Russians are trying to be a good neighbor — these are the things they still do."

On China, Coats said that the U.S. has to decide if China is a "true adversary or a legitimate competitor."

Either way, he said the U.S. must stand strong against China's effort to steal business secrets and academic research. "I think that's where we begin to draw the line," he said.