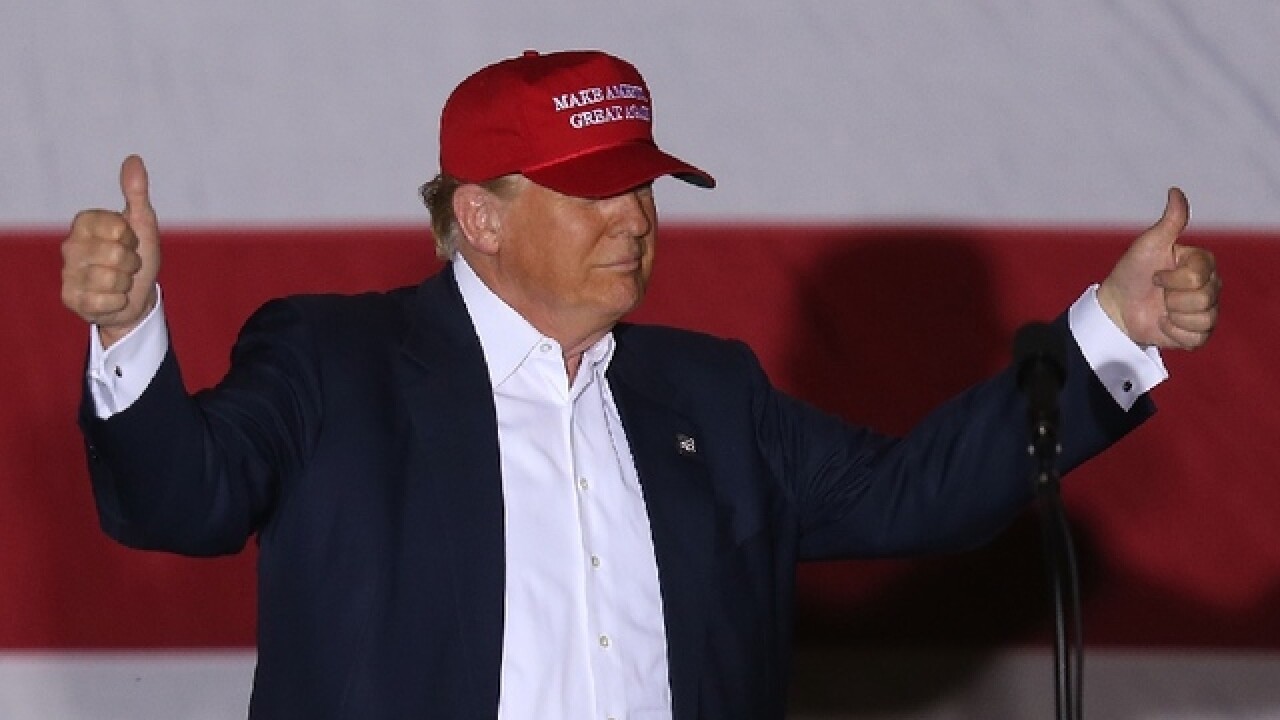 Donald Trump and Hillary Clinton prevailed in Arizona's primary, putting them a step closer to wrapping things up and getting on with a head-to-head race for the White House, unobstructed by rivals who just won't quit.

Contests Tuesday in Arizona, Utah and Idaho were deciding how near that moment might be for one of them or both. The two are clear front-runners, but Clinton has an easier path.

Even Trump, for all of his supreme confidence and frequent flights of hyperbole, is raising questions now about whether he can clinch the Republican nomination before the July convention. If not, he'll be steeled for an extraordinary struggle in Cleveland against elements of the party that are exploring every option to hand the prize to another candidate. In contrast, Clinton's lead in delegates is close to unassailable, but coming primaries may be friendly enough to rival Bernie Sanders to keep him credibly in the Democratic fight.

Idaho and Arizona had reports of long lines heading into their contests. Democratic party leaders in Idaho delayed the start time for the caucus in Ada County, which includes Boise, to accommodate long lines of people waiting to enter the site.

In the Phoenix area, polling places were inundated with voters. Election officials in Maricopa County rushed extra Democratic ballots to one polling place after the location ran out.

The backdrop Tuesday was carnage in Europe. Will the deadly bombings in Brussels, tentatively tied to the Islamic State, nudge Republicans toward Trump, the man who wants to seal the borders to non-American Muslims? Or toward a Washington insider steeped in foreign policy and national security experience?

Well, it won't do that, because there is no such person left in the GOP race. But John Kasich or Ted Cruz might be seen as having the steadier hand in crisis. So might Clinton, the former secretary of state, on the Democratic side.

-Republican and Democratic primaries in Arizona. Trump's victory gave him all 58 delegates. Clinton stood to win at least 40 of the 75 delegates up for grabs. Sanders was picking up at least 16.

-Republican and Democratic caucuses in Utah. If a Republican wins more than 50 percent support, he will take all 40 delegates; otherwise the prize will be proportional among Trump, Cruz and Kasich. Clinton and Sanders are competing for the largest share of 40 delegates. Nine Republican delegates are up for grabs in American Samoa.

-Democratic caucuses in Idaho, with 23 delegates at stake. Idaho Republicans handed Cruz a strong victory over Trump on March 11.

- "She's the only one who's been out here trying to make a difference." - Marie Howard, 57, of Tonalea, Arizona, on why she's backing Clinton. Howard and her family were among thousands of Navajos who were moved off Hopi land in a bitter dispute before settling in an area of the Navajo Nation. Clinton visited long before she became a presidential candidate.

- "You don't hear anyone mention the Natives. All these different candidates say they're going to do this or that for certain people, the Hispanics, the whites, that's the sad part." - Longtime Republican Lorraine Maloney, 60, of Cameron, Arizona, who voted for Cruz at a polling site on the Navajo Nation where gusty winds sent dust swirling and rocked vehicles.

Trump's tough immigration message rattles many Americans, but in Arizona it sits comfortably in the saddle for a lot of people. Trump won a comfortable victory in a contest in which he had been favored.

He campaigned in the state flanked by two other hard-liners on the issue, ex-Gov. Jan Brewer and Sheriff Joe Arpaio. Trump's rallies were again raw, with obscenity-spitting protesters, angry supporters, bottles and insults thrown by demonstrators at the attendees and the kicking and punching of a protester by a man arrested at the scene.

The state tested Clinton's appeal with Latinos in the Southwest, who appeared to favor Sanders in Nevada. She won the 2008 Arizona primary against Barack Obama and repeated her feat eight years later.

Cruz made a strong push; the question is whether he can win majority support and take all the delegates. That's a tougher bar with Kasich in the mix. Mitt Romney, the 2012 GOP nominee and a leading Trump critic, is using his influence with fellow Mormons and others in Utah to nudge voters toward Cruz, saying: "A vote for John Kasich is a vote for Donald Trump."

Kasich, the Ohio governor, has been a leading voice for civility in the race, which is not to say his campaign is pure. In an online ad, he falsely implies that Romney backed him in Utah.

The ingredients were in a place for a good night for Sanders: thousands of supporters at a rally Monday, no campaign visits by Clinton, a caucus system that plays to his strengths, a largely white population and an election open to anyone, not just Democrats. Obama defeated Clinton in overwhelming fashion in 2008.

Clinton won all five races a week ago, almost doubling Sanders' delegate haul in Florida in the process.

Trump won four of six races, taking all 99 delegates in Florida, scoring a strong victory in Illinois, edging out Cruz in North Carolina and taking the small prize in the Northern Mariana Islands. Missouri remains undecided.

Both parties hold contests April 5 in Wyoming; in mid-April the campaign swings to big states in the Northeast.