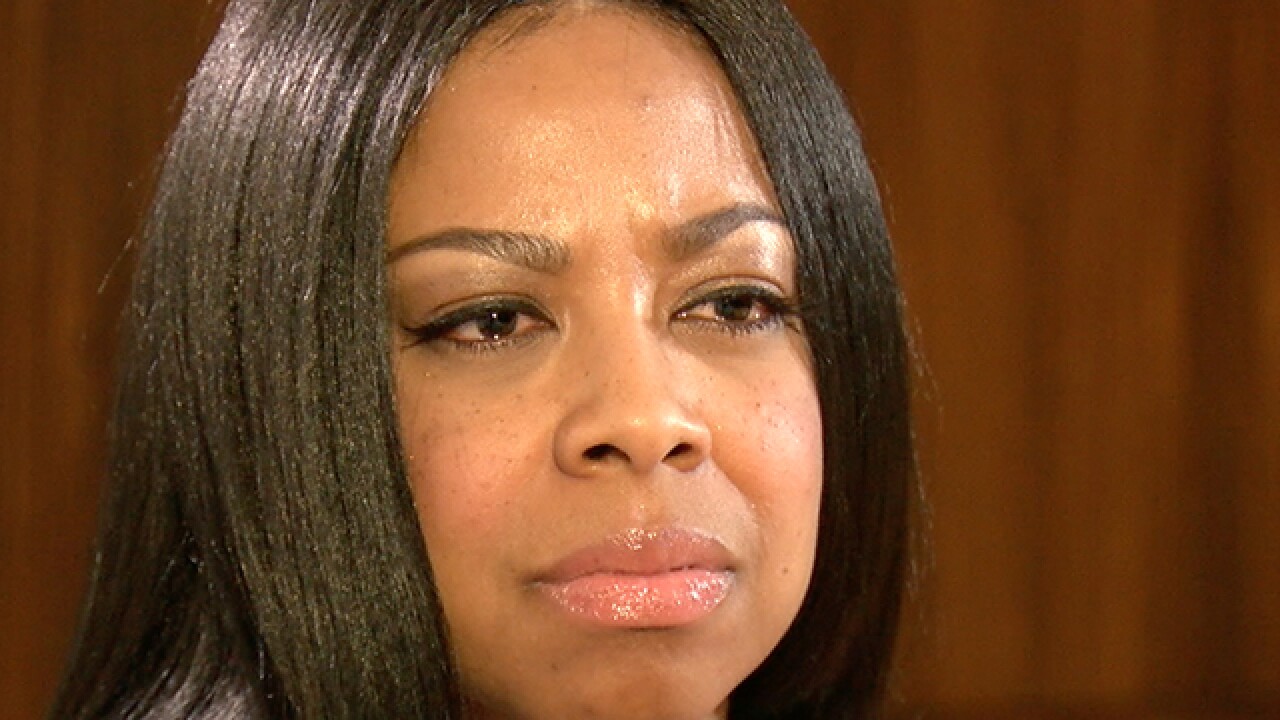 Copyright 2018 Scripps Media, Inc. All rights reserved. This material may not be published, broadcast, rewritten, or redistributed.
<p>Leslie Branch-Wise, the police detective whom Denver Mayor Michael Hancock apologized to for sexually harassing her in 2012 says she accepts his apology, but still fears retaliation, and the city of Denver will unveil new sexual harassment training for all employees in the wake.</p>

DENVER – The police detective whom Denver Mayor Michael Hancock apologized to for his provocative texts from 2012 says she accepts his apology, but still fears retaliation, and the city of Denver will unveil new sexual harassment training for all employees in the wake.

“I was proud of that woman that I watched,” Detective Leslie Branch-Wise said in regards to the Denver7 Investigates story that exposed Hancock’s text messages sent to her. “Leading up to it, I was so nervous. But I actually was proud of watching that woman.”

In the report, Branch-Wise provided Denver7 with text messages sent to her by Hancock in which he made several suggestive or sexual comments toward her. She said the texts made her “physically sick.”

The mayor apologized about the texts in an interview with Denver7 Investigates, saying that he and Branch-Wise “became friends” and that he “blurred the lines between being a friend and being a boss.”

“I learned, after six years, that [the texts] hurt her and offended her,” Hancock said. “I am here to accept the responsibility for that and to apologize.”

But he stopped short of saying he sexually harassed Branch-Wise, despite her being his subordinate and part of his security detail at the time of the harassment.

Late Tuesday, Branch-Wise sat down for another interview with Denver7 to discuss Hancock’s comments.

“He has PR, public relations in his corner. I do accept his apology. Was it sincere? I don’t know,” she said. “I would just question: Why now? He’s had my information all these years.”

“The mayor runs this great, big city of ours and has all that information about me, and never – between then and now – have I ever received a telephone call, an email, or a letter from the mayor saying, ‘I’m sorry,’” she continued. “He was minimizing the things that he had said in text, and hoping that the people would see that or see it his way.”

She brushed aside his claim that the two were friends, and that that made his comments OK.

“He said that in the 10-month time that we worked together we had become friends,” Branch-Wise said. “And I have friends on this job that I’ve been with for 18 years, and they’ve never sent me those kinds of texts, or never said those kinds of things. And those are my friends. He was my boss.”

“No one wants to receive those texts,” she added. “They’re unwelcome, I didn’t ask for them, and they were inappropriate. They were sexual harassment. It wasn’t familiar. It wasn’t because we were friends, because friends don’t treat friends like that.”

Branch-Wise said she felt the apology was politically-motivated so Hancock could further his career, and added that while she felt he was being sincere in saying he would personally not retaliate, that she still feared retaliation from his staffers.

“He has lots of people underneath him. That’s what scares me,” Branch-Wise said, herself pushing off questions of her own possible motivations.

Amid comments from most of the Denver City Council , Branch-Wise said Hancock’s political future would be up to him and his staff. And as the city's HR department and mayor's office  announced the new mandatory sexual harassment training for all city employees would be coming after months of work,  Branch-Wise offered her own words of advice.

The city of Denver says it is preparing mandatory sexual harassment training for employees, hours after @TonyKovaleski broke news of "inappropriate" texts sent by Mayor Michael Hancock to a DPD detective. @DenverChannel pic.twitter.com/ZuSX9eYyRU

“I hope that people in positions of power – whether they be men or women – treat their employees with respect,” she said. “And that’s kind of the golden rule: just treat others how you want to be treated.”

Hancock sent an apology Wednesday afternoon to all city employees as well, which was obtained by Denver7. In it, he says Branch-Wise showed courage by coming forward.

“She is a valued and dedicated police officer who has served and continues to serve this city well,” the email to employees said.

Read the full letter below:

Yesterday, I issued a sincere apology to a Denver Police Detective who is a former member of my security team. I also apologize to my wife and family, and I apologize to all of you. I have learned from this mistake, and today I assure you that my words and actions will continue to support all women in the workplace.

Six years ago, the Detective called me to let me know that she had requested a transfer out of the unit because a member of my staff had sexually harassed her. I listened and what I heard greatly disturbed me. I apologized that this had happened. We reviewed the matter and took immediate action. The employee was fired within days.

While those facts have been public for years, I am apologizing for my own words from that time -- text messages that were too familiar and unprofessional. Unfortunately, I didn't know until just a few days ago that she felt our text exchanges contributed to the pain and disrespect she was already feeling. But it is obvious now that she did feel that way.

I have the utmost respect for the Detective. She showed courage in 2012, and again by coming forward now. She is a valued and dedicated police officer who has served and continues to serve this city well.

I trust that those who know me will recognize that this is not a full measure of my character -- of who I am as a husband, a father, a son or the Mayor of this great city. I hope you'll also take a moment to hear these words directly from me.

Thank you for the important work that you do every day for the city and its residents.