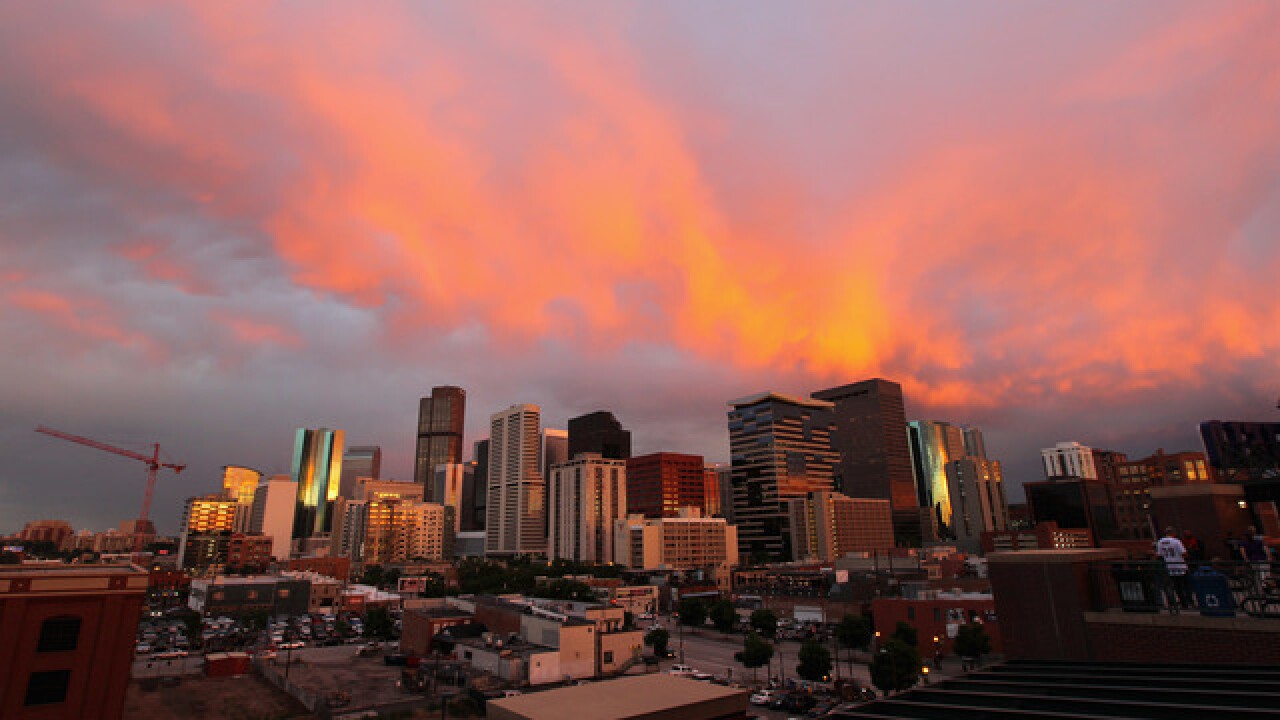 2011 Getty Images
Doug Pensinger
<p>DENVER, CO - JULY 14: Turbulent weather produced a spectacular sunset over the skyline of the Denver downtown as seen from the stadium as the Milwaukee Brewers face the Colorado Rockies at Coors Field on July 14, 2011 in Denver, Colorado. (Photo by Doug Pensinger/Getty Images)</p>

DENVER – Mayor Michael Hancock is considering raising the minimum wage for Denver city employees and people who work at businesses operating inside city facilities to $15 an hour, his office announced Tuesday.

The theoretical increase would be phased-in over several years, the mayor’s office said, and would apply to starting wages for city employees, contractors, vendors and tenants as well.

But first, the city’s Department of Finance will explore the feasibility of such an increase. The mayor’s office said the department plans to talk to community members, businesses and city employees and to release its findings and recommendations to the mayor early next year.

A group of employees at Denver International Airport have already turned in signatures to try and get their initiative to raise minimum wages for some airport workers to $15 an hour onto the May 2019 ballot in Denver. DIA is owned and operated by the city and county of Denver.

Teresita Felix, the organizer of the campaign to get the measure onto May’s ballot, called the city’s announcement “exciting news.”

“I work for United Airlines at Denver International Airport. My wages are so low my daughter and I have to share a house with 20 other people because I can’t afford to live in Denver on my own. That’s why we’re fighting for $15 at DIA,” Felix said in a statement.

Rising costs of living across parts of Colorado have made the minimum wage a major issue. For instance, Aspen Skiing Co. raised its minimum wage for this year’s ski season to $13.50 an hour – up from $12 an hour last year – in order to attract more seasonal workers who have to live in expensive parts of the state. The company also offers benefits.

The issue has also grown in Denver as housing prices continue to rise.

“While unemployment is low and Denver’s economy is among the strongest in the country, wage growth has not kept pace with a rising cost of living,” Hancock said in a statement. “Lower- and middle-income workers are struggling to get by. I’ve been meeting with many employees and listened to stories and experiences. I believe we have an opportunity here to make meaningful difference in people’s lives.”

Hancock is up for re-election in 2019 and will face a slew of candidates.