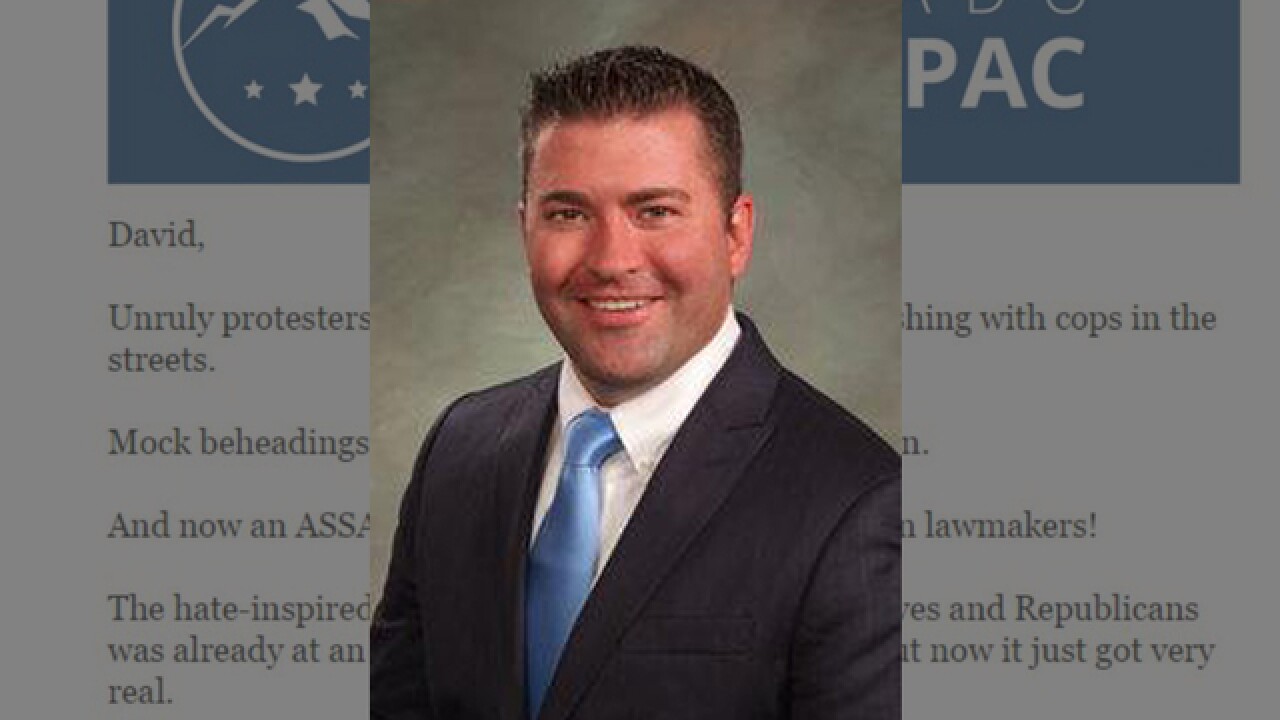 Colorado Legislature
<p>House Minority Leader Patrick Neville, R-Castle Rock, was blasted by liberal groups Wednesday and Thursday for seemingly trying to raise money off of the shooting of a congressman Wednesday.</p>

DENVER – Colorado’s Republican House Minority Leader is under fire for what some are saying was a thinly-veiled attempt to raise money for a conservative political action committee off of Wednesday’s shooting of a U.S. congressmen, several aides and police officers.

Denver Daily Beast contributor Dave Maney first raised the issue, tweeting out an email from Colorado Liberty PAC signed by House Minority Leader Patrick Neville, R-Castle Rock, in which Neville says that the Virginia shooting was an “attack tantamount to political terrorism aimed at shutting up Conservatives, Republicans, and Americans like you.”

“I lay the blame squarely at the feet of ‘tolerance-preaching progressives’ and their accomplices in the media who allowed violent rhetoric to get so out of control,” the email said, after it said “the left” was “out of control.”

“No wonder why the socialist piece of trash who tried to kill Republican lawmakers today thought his deranged actions were justified,” the letter continued.

But it drew its strongest rebukes for what came next.

“Finally, if you can, please show us that you’re not backing down by chipping-in $50 or $25 to Colorado Liberty PAC today so we can retake the State House in 2018,” the letter read. “Your contribution today will help us advance our conservative values through passionate and peaceful civil discourse that makes our country great.”

The emboldened plea came just hours after a 66-year-old Illinois man with a history of making anti-Trump statements shot Rep. Steve Scalise and four others at practice for this year’s congressional baseball game.

It also came as members of Congress from both sides of the aisle called for less partisanship in Washington.

The email came as a surprise to Maney and others, especially those on the left-leaning side of the political spectrum.

Colorado Pols, a left-leaning blog, was the first local outlet to report on the email , saying “Neville and Republicans he supports via the Colorado Liberty PAC have ceded the high ground…[and] have politicized [the Virginia shooter’s] horrific actions,” the blog wrote, in part. “[T]hat rank hypocrisy still wasn’t enough. They tried to make money off it. It’s too far. It’s too much. And we don’t want to hear how it’s ‘too soon’ ever again.”

Other local and national media outlets have since picked up the story , including Raw Story and the New York Daily News.

Neville, whose website claims “the Second Amendment is a bulwark against tyranny” and that he is “100 percent pro-life, no exceptions,” sponsored a bill in this year’s legislative session that would have allowed concealed handguns on public school grounds with certain training, but Democrats on the House Committee on State, Veterans & Military Affairs killed the bill before it reached the House floor.

In response to multiple questions from Colorado media outlets regarding Wednesday’s email from the PAC, Neville issued a statement through the Colorado House Republicans:

“Our thoughts and prayers are with Congressman Steve Scalise, the capitol staff and law enforcement who were wounded in today’s attack, and with their families. We’re grateful to the armed Capitol Police for stopping what might have otherwise been a massacre.

It’s time for the media and political leaders in Washington and Colorado to denounce the recent hate-inspired political rhetoric by so-called progressives against Republicans, and return to the passionate and peaceful civil discourse that makes our country great.”