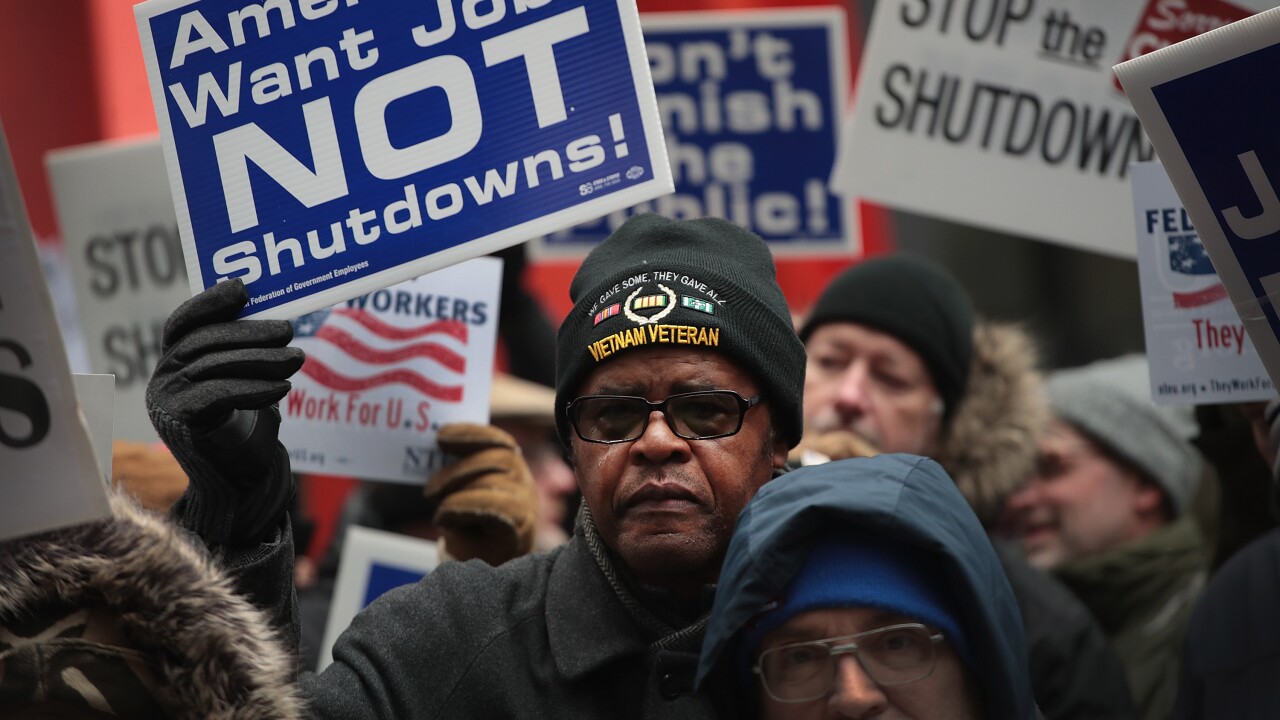 Copyright Getty Images. All Rights Reserved.
Scott Olson/Getty Images
CHICAGO, ILLINOIS - JANUARY 10: Government workers protest the government shutdown during a demonstration in the Federal Building Plaza on January 10, 2019 in Chicago, Illinois. The protest, on the 20th day of a partial shutdown, was one of several held around the country today. (Photo by Scott Olson/Getty Images)

DENVER – Colorado’s four Democrats in the U.S. House of Representatives on Friday issued a joint statement calling for President Trump and Republicans to end the partial government shutdown, which they said was “senseless.”

The shutdown entered its 21st day on Friday – tied for the second longest shutdown in government history. Many of the roughly 800,000 government employees working with no pay or who have been furloughed missed their paychecks Friday.

MORE: Click here for a list of Colorado businesses offering free or reduced services for furloughed employees during the shutdown.

The U.S. House on Friday morning voted to pass an appropriations bill for the Department of Interior and Environmental Protection Agency that would allow both agencies to reopen and resume their work in full. But Senate Majority Leader Mitch McConnell, R-Ky., has vowed to block the House-passed measures as he demands the $5.7 billion the president has pushed for and closed the government over.

Colorado’s House Democrats – Reps. Diana DeGette, Joe Neguse, Jason Crow and Ed Perlmutter – said in a joint statement Friday that 15,000 Coloradans were missing a paycheck Friday because of the shutdown and said President Donald Trump and Republicans were using those federal employees as “political pawns.”

“This shutdown puts our country’s national security at risk and the livelihoods of hardworking men and women in jeopardy. Enough is enough,” they said in the statement. “We call on Senate Republicans to immediately act and join Democrats to fully reopen the government and end this senseless shutdown. It’s past time for President Trump and Senate Republicans to come to their senses and act in the best interest of the country and hardworking folks everywhere.”

About one-quarter of the federal government is shutdown during the impasse, and various departments are affected.

In Colorado, as of Thursday, there were 1,424 federal workers who had filed for unemployment, according to the Colorado Department of Labor and Employment. That was about 16.6 percent of the 8,586 claims filed over that period.

On Friday, the National Air Traffic Controllers Association union sued the Trump administration over the requirement they work without pay.

Neguse, who represents Colorado’s 2nd congressional district, called the House-passed EPA and Interior Department measure a “common-sense bill” and implored Senate Republicans to take up the bill in order to reopen national parks, like Rocky Mountain National Park, and help out businesses that depend on tourism to the parks.

Alpine Bank, based in Colorado, is offering interest-free loans to federal employees who did not get paid on Friday, and numerous other Colorado businesses are offering the workers freebies as the shutdown continues.

Perlmutter’s district office in Lakewood started providing meals for constituents and federal employees affected by the shutdown on Friday and plans to continue doing so from 8:30 a.m. to 5 p.m. during the shutdown. Staffers will also be on hand to talk with constituents at the office, which is located at 12600 W. Colfax Ave.

Several of Colorado’s congressional Republicans and Democrats are not taking paychecks during the shutdown , including Sen. Michael Bennet, D-Colo., who along with other senators on Friday called for the Interior Department to extend a public comment period on a proposal to drill in the Arctic National Wildlife Refuge, saying there was “no legitimate reason to rush” the review during the shutdown.

Sen. Cory Gardner, R-Colo., told Denver7 last week that he didn’t believe the government should be shut down while a border security funding measure is put together.

Though the shutdown is ongoing, the Senate did pass a bill Thursday that would guarantee that furloughed workers are paid backpay once the shutdown ends. The House passed the measure on to the president’s desk on Friday, and he is expected to sign it. All of Colorado's congressional delegation voted in favor of the measure.

Meanwhile, Trump has been asking lawyers about whether he can use emergency powers to build the wall with disaster funds despite objections from Congress and his and the Republican Party's pledge during the 2016 campaign that Mexico would pay for the wall.

If the shutdown reaches into early Saturday, as it is expected to with the Senate not back in session until Monday, it would break the record for longest shutdown – which was set in December 1995 into January 1996 during the Clinton administration and a budget disagreement between Clinton and then-House Speaker Newt Gingrich.