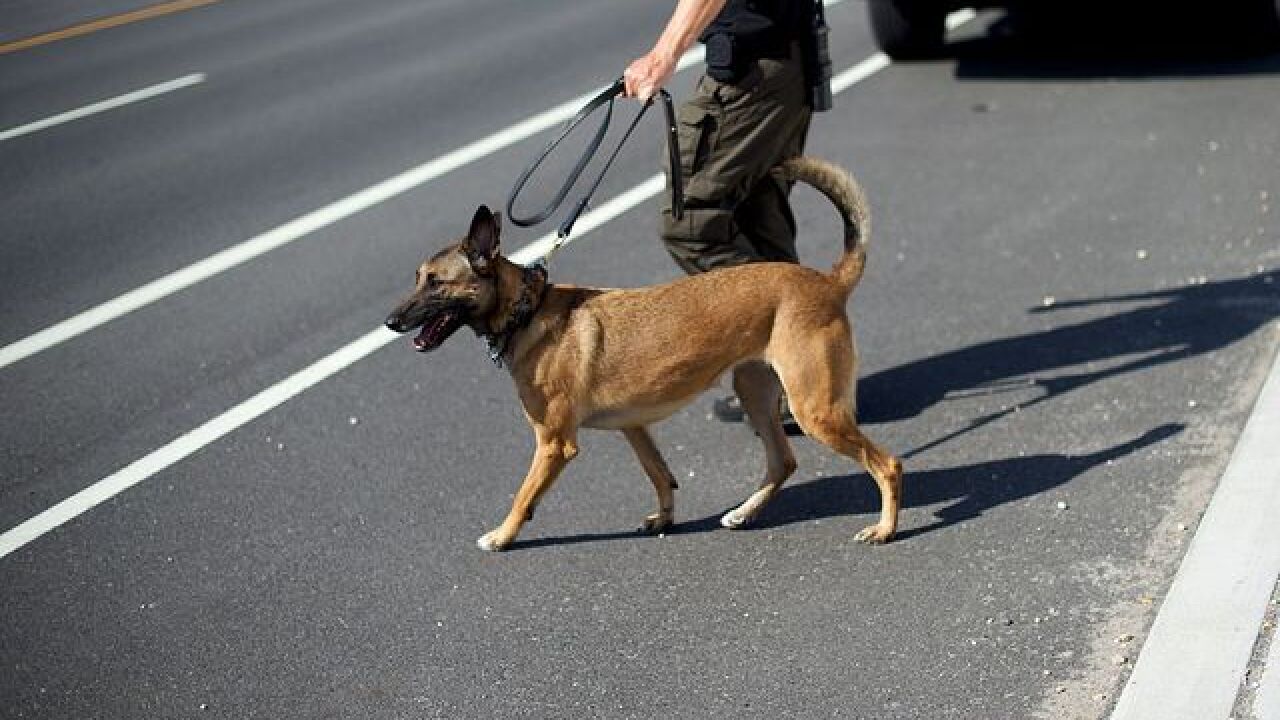 2016 Getty Images
Mark Makela
<p>SEASIDE PARK, NJ - SEPTEMBER 17: A police officer K-9 unit monitors activity near the scene of an "pipe bomb-style device" explosion on September 17, 2016 in Seaside Park, New Jersey. The explosive device detonated in a trash can after 9:30am this morning along the route of the Seaside Semper Five Marine Corps Charity 5K run to benefit military soldiers. No injuries were reported. (Photo by Mark Makela/Getty Images)</p>

DENVER – The Colorado Supreme Court will review a 2017 decision by the state Court of Appeals that said law enforcement officers can’t only use the alert of a drug-sniffing dog as probable cause to search a person’s vehicle.

The full court will hear the petition for the writ of certiorari later this year. In the review of the appeals court’s decision, judges will also review to the original 2015 case out of Moffat County and a 2016 Colorado Supreme Court decision.

The case started when a drug-sniffing dog alerted to a truck driven by Craig resident Kevin McKnight during a traffic stop, after which McKnight was arrested for meth possession.

But the judge in the case deemed the search illegal because the dog could not differentiate between marijuana, which is legal for adults 21+ in quantities up to one ounce in Colorado, and other illicit drugs like cocaine, heroin and meth.

But the three-judge appeals court panel decided last summer that people in Colorado have a reasonable expectation of privacy not to be searched for a product they possessed legally, lest it constitute a violation of a person's Fourth Amendment right to be protected from unreasonable searches and seizures.

Their decision led to McKnight’s conviction being overturned, though law enforcement officials can use drug-sniffing dogs in the process of getting probable cause if officers could find other factors contributing to the probable cause—something the state Supreme Court decided in 2016, saying that the odor of marijuana was “still suggestive of criminal activity.”

The Supreme Court review will only look at the question of “whether an alert by a drug-detection dog that is trained to detect marijuana and other controlled substances can supply probable cause to justify a search,” and denied any other questions raised.

Several law enforcement agencies in Colorado have stopped training new drug dogs to detect marijuana altogether after prior court rulings, while other agencies that still use drug dogs trained before recreational marijuana was legal say they already use multiple factors in obtaining probable cause to search a vehicle.

California and Arizona are among the states with some form of legal marijuana where courts have said that the odor of marijuana wasn't enough to constitute a search without a warrant.