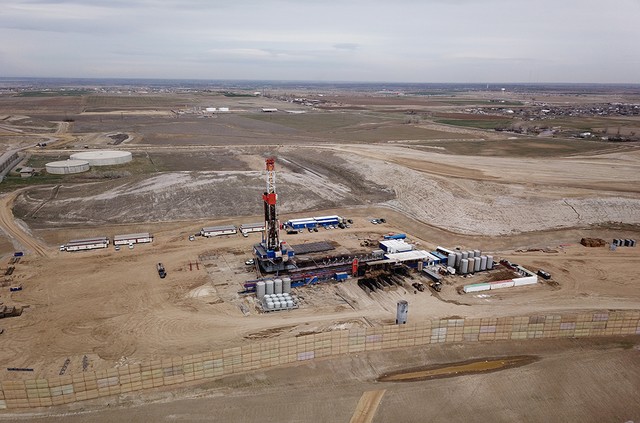 The Colorado Supreme Court on Monday overturned a lower court’s decision that said the Colorado Oil and Gas Conservation Commission was required to weigh the impact of oil and gas development on public health and the environment in deciding whether to approve new drilling permits and rules pertaining to the oil and gas industry in Colorado.

DENVER – The Colorado Supreme Court on Monday overturned a lower court’s decision that said the Colorado Oil and Gas Conservation Commission was required to weigh the impact of oil and gas development on public health and the environment in deciding whether to approve new drilling permits and rules pertaining to the oil and gas industry in Colorado.

Colorado Supreme Court Justice Richard Gabriel wrote the unanimous 7-0 decision that was released Monday, which found that the COGCC “properly declined to engage in rulemaking to consider a rule” proposed in 2013 by Xiuhtezcatl Martinez and a group of Boulder teenagers.

The teenagers had asked the COGCC to create a rule that would have barred the COGCC from issuing drilling permits “unless the best available science demonstrates, and an independent, third-party organization confirms, that drilling can occur in a manner that does not cumulatively, with other actions, impair Colorado’s atmosphere, water, wildlife, and land resources, does not adversely impact human health, and does not contribute to climate change.”

The COGCC said in 2014 that approving such a rule would have been beyond the authority it was granted by the Colorado General Assembly when the commission was created. The teens and a host of environmental advocacy groups appealed to the Denver District Court, which sided against the teens and advocates.

They appealed to the state court of appeals, arguing that the district court judge had misread the directive purpose of the COGCC in the decision. The appeals court found in favor of the group, arguing that language in the directive “was not intended to require that a balancing test be applied,” but rather that development “be regulated subject to the protection of public health, safety, and welfare, including protection of the environment and wildlife resources.”

But the COGCC, American Petroleum Institute and the Colorado Petroleum Association petitioned to the Colorado Supreme Court, with then-Attorney General Cynthia Coffman arguing state law and earlier Supreme Court decisions were being overridden—despite an objection from then-Gov. John Hickenlooper.

But in the Supreme Court’s decision, Gabriel reversed the appeals court’s decision and said the COGCC “properly declined to engage” in rulemaking with the teenagers and environmental groups.

The court listed three reasons as to why it made its decision.

It said that courts had a “limited and highly deferential” role in an agency’s decision whether to engage in rulemaking with various parties and secondly, that the COGCC “could not properly adopt the rule” proposed by the teenagers.

“Specifically, as the Commission recognized, the pertinent provisions do not allow it to condition all new oil and gas development on a finding of no cumulative adverse impacts to public health and the environment,” the court wrote in its summary. “Rather, the provisions make clear that the Commission is required (1) to foster the development of oil and gas resources, protecting and enforcing the rights of owners and producers, and (2) in doing so, to prevent and mitigate significant adverse environmental impacts to the extent necessary to protect public health, safety, and welfare, but only after taking into consideration cost-effectiveness and technical feasibility.”

The court further said that when the COGCC declined to engage in rulemaking with the petitioners it “reasonably relied on the facts that it was already working with the CDPHE to address the concerns underlying [the teens’] proposed rule and that other Commission priorities took precedence at the time.”

And new Gov. Jared Polis, a Democrat from Boulder, said in his first State of the State address last week that he was looking at local control for some industries like oil and gas, and said it was time for his administration “to take meaningful action to address the conflicts between oil-and-gas drilling operations and the neighborhoods they impact, and to make sure that all of our communities have clean air and water.”

He said that he would continue to put the state on a path toward 100 percent renewable energy by 2040, but also said he wouldn’t leave the state’s oil and gas workers behind in adapting the state’s energy sources.

“While I’m disappointed by today’s ruling, it only highlights the need to work with the Legislature and the Colorado Oil and Gas Conservation Commission to more safely develop our state’s natural resources and protect our citizens from harm,” Polis said in a statement Monday. “I’ve made transitioning to renewable energy a top priority because it is the best way to protect Coloradans’ health and safety, reverse the harmful effects of climate change that threaten our economy and our way of life, and boost our state’s economy by creating green jobs that can never be outsourced.”

“Today’s outcome is positive for all Coloradans. The court was right to deny a single out-of-state interest group – one that advocates for ending all energy development across the country – the ability to rewrite our state’s laws,” Colorado Petroleum Council Executive Director Tracee Bentley said in a statement, calling environmentalists’ agenda “extreme” and claiming that a ruling in their favor would have cost the state money and jobs.

“We are confident in Colorado’s energy future and the ability of the Colorado natural gas and oil industry’s ability to continue to reshape the global energy balance, fueling an American manufacturing revival and leading the world in environmental progress,” Bentley added.

Though one of the primary attorneys for the respondents in the case was from Oregon-based Wild Earth Advocates, the other attorneys were both based in Boulder, and attorneys for a host of government, private citizens and environmental groups who filed amicus curiae briefs in the case were also from Colorado.

Colorado Rising, the group behind the setbacks measure which was defeated in November and which has already petitioned Polis for a new measure, slammed the court’s decision Monday.

“The Supreme Court’s job is to decide what the law says, not if it is correct or moral. This decision validates all of our concerns that the State is not adequately protecting public health and the regulations are insufficient,” said the group’s spokesperson, Anne Lee Foster. “It is hard proof that the law is written against the best interests of the people, and in favor of oil and gas profits.”

The group called for Polis to stop all new drilling and permitting by the COGCC “until the legislature can modernize the laws to deal with clear and present threat that horizontal drilling and fracking in neighborhoods poses to public health and safety” and said the COGCC was “promoting an industry rather than protecting the public from harm.”

Sen. Mike Foote, a Lafayette Democrat who has been among the most vocal lawmakers when it comes to pushing back against the oil and gas industry, said in a statement that he saw the decision as an opportunity for the General Assembly to make fixes itself to the COGCC.

“While I am disappointed in the decision, it gives us at the legislature an opportunity to finally put health and safety first with oil and gas operations,” Foote said. “It is well beyond time for us to protect Coloradans and our clean air and water. I am confident that my colleagues and I will come forward with legislation to do exactly that.”

Democrats now control the state House and Senate, as well as the governor’s office, and have the opportunity to pass whatever they can get their full caucus to agree on without Republican support, though they have pledged to pass bipartisan bills.

House Speaker KC Becker said the court's ruling "puts the decision back into the hands of lawmakers to take action and we are committed to addressing this concern this legislative session."