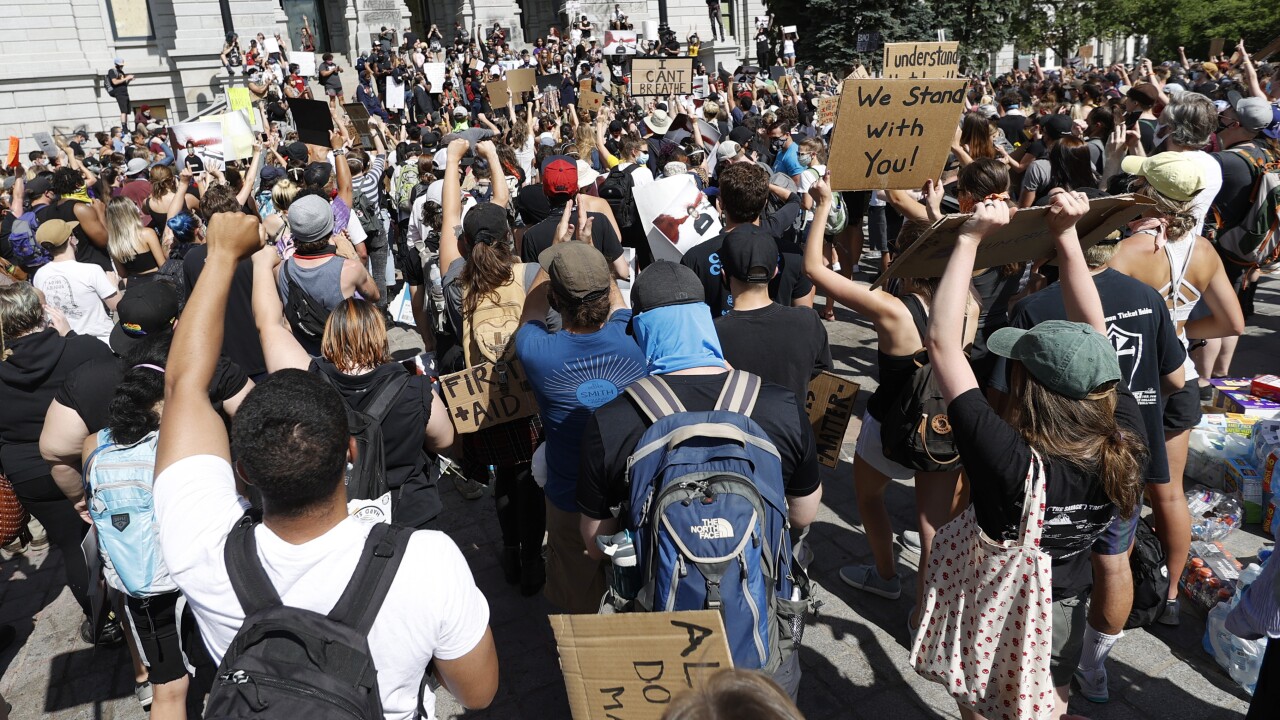 (Copyright 2020 The Associated Press. All rights reserved. This material may not be published, broadcast, rewritten or redistributed.)
David Zalubowski/AP
Demonstrators raise their arms in support as state Rep. Leslie Herod, D-Denver, and Senate President Leroy Garcia, D-Pueblo, announce plans to introduce a bill to increase police transparency and accountability, during a protest Tuesday, June 2, 2020, outside the State Capitol in Denver over the death of George Floyd in Minneapolis. (AP Photo/David Zalubowski) 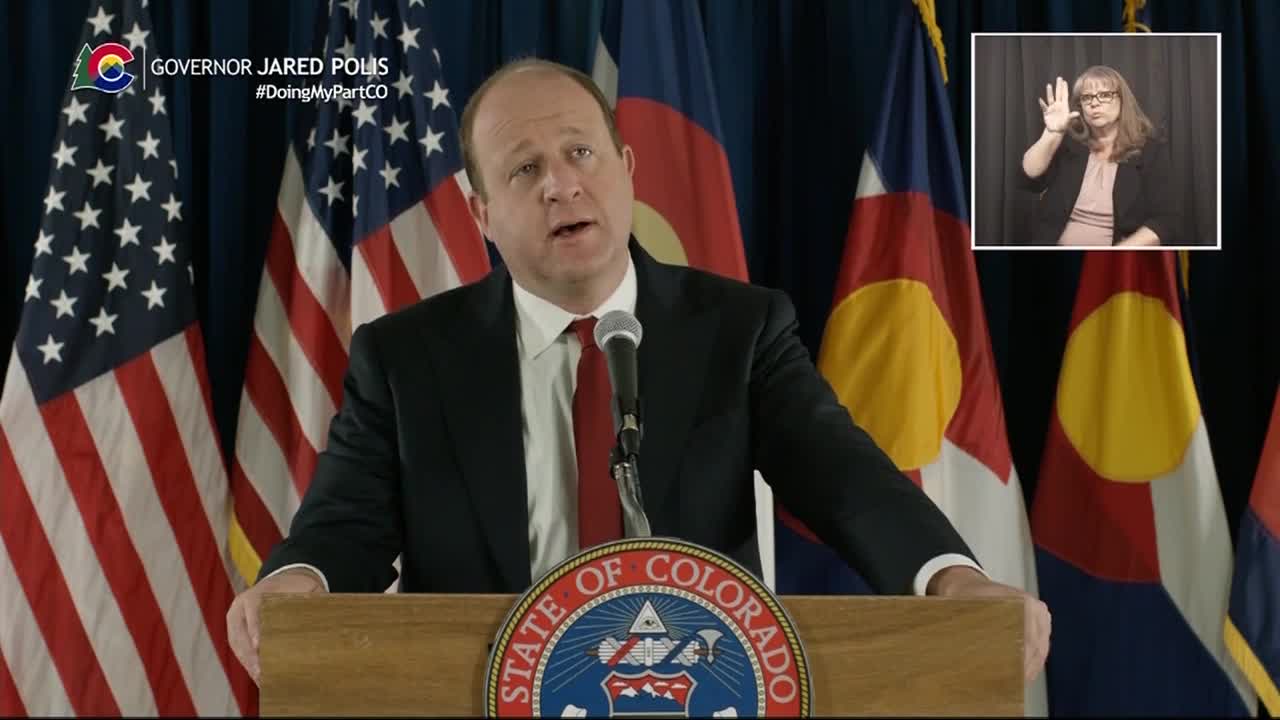 DENVER – The Colorado Senate on Tuesday passed in a nearly unanimous vote a police reform and accountability measure brought in the wake of the death of George Floyd and massive demonstrations across the state calling for better accountability for officers and an end to racial injustice.

The vote was 32-1, with two lawmakers excused and Sen. Jerry Sonnenberg, R-Sterling, opposed to the measure. Senate Bill 217 now heads to the House for consideration. Monday's preliminary Senate voice vote was unanimous.

“I’m extremely, extremely proud of the work we’ve done together,” Senate President Leroy Garcia, D-Pueblo, who is also one of the prime sponsors of the bill, said just before the vote.

Senators of both parties spent the hour before the vote lauding the bipartisan work done on the bill in recent days, led by the bill’s Democratic sponsors.

Sen. Joann Ginal, D-Fort Collins, discussed how she spent three hours with Larimer County Sheriff Justin Smith, who was strongly opposed to the bill when it was introduced last week, going page by page and discussing his concerns, which she said brought about amendments.

And Sen. Jack Tate, R-Centennial, said it was “really cool” watching senators work to amend the bill since it passed committee last Thursday, including work over the weekend and more discussions Monday, when 12 amendments to the measure were adopted.

“What I saw yesterday in an office on the second floor were knowledgeable lawmakers at the table deciding what the law should be,” Tate said.

The Democrats who are the prime sponsors of the bill said after the measure’s Senate passage that the demonstrations in Denver and across Colorado helped change the discussion surrounding the bill in recent days, to which they credited the near-unanimous vote, as did the ACLU of Colorado, which worked with sponsors in crafting the measure.

“George Floyd’s murder may have been the catalyst for this movement, but the truth is, black and brown bodies have been perpetually abused by officers for decades,” sponsor Sen. Rhonda Fields, D-Aurora, said in a statement. “Departments have refused to root out the violent corruption insidiously infecting their culture. It is long overdue that lawmakers step in and mandate accountability and transparency. Thanks to the brave commitment of those calling for justice, we’ve been able to bring this legislation across the line. I am honored to have had the opportunity to channel the power of the people and make real change happen.”

“What we accomplished with Senate Bill 217 serves as a reminder that direct action matters,” said Elisabeth Epps, of the ACLU and Colorado Freedom Fund. “Protest matters. Black lives matter.”

Republicans who announced their support for the measure yesterday spoke Tuesday about their struggles with balancing what police officers have been asking for regarding the measure with what the broader community has called for during the demonstrations.

“We need the best of the best for our communities to ensure that protection and service is for each of us and all of us. I believe this is what the officers and deputies I know aspire to. And I hope they see and will understand this bill is our best hope in a time of crisis in our communities, in our nation, to find the right way forward for public safety and law enforcement,” Gardner added.

Sen. Julie Gonzales, D-Denver, whose amendment prohibiting officers from using less-lethal projections on protesters to target their heads, pelvis or back and which prohibits the use of chemical agents on crowds before orders are given and time to comply is allowed was adopted on Monday, said ahead of the vote that the room “feels electric with possibility and the weight of the responsibility here before us.”

Senate Minority Leader Chris Holbert, R-Parker, thanked Democratic lawmakers to working together over the weekend on the bill, which led to amendments, including those adopted Monday from Sen. Mike Foote, D-Lafayette.

“We talked to each other and listened. We used our expertise,” Holbert said. “Our work product today is different than the bill that was introduced. It teaches us the lesson: Don’t judge a book by its cover.”

Garcia, who was deployed to Iraq while he was in the Marine Corps, talked about understanding what police officers were going through who felt threatened by people throwing rocks during the early days of the Denver demonstrations, saying he had rocks thrown at him and was shot at while in Iraq and that he recognizes the difficulty for the many “truly great officers.”

But he said he was reminded of the Marine Corps Eagle, Globe, and Anchor emblem that represents Marines’ honor, courage and commitment and how that translates similarly to a peace officer’s badge and oath of duty.

“The badge is a symbol of public faith,” he said.

“I am proud that we were able to bring people together on this issue, even those who have been fighting against reform for decades. But this is not the end of our work. We will continue demanding accountability and transparency until community trust is achieved,” Garcia said in a statement after the vote.

Black Lives Matter demonstrations in Denver have been peaceful since early last week after officers stopped using less-lethal weapons on demonstrators and the tiny groups of people that had been causing vandalism and some violence toward police stopped doing so or stopped showing up.

The changes to the bill in recent days also came after a federal court ruling regarding the Denver Police Department’s use of force during those early days, and policy changes from the department surrounding body cameras and less-lethal munitions.

On Friday, a federal judge issued a temporary restraining order that says only lieutenants or higher ranks can order the use of less-lethal rounds, like pepper balls and tear gas, and for certain requirements to be met – such as officer-witnessed violence or types of destruction.

The department announced Sunday – following a Friday letter from Denver City Council members – some changes to its use-of-force and body camera policies, which include a ban on chokeholds and carotid compressions, the requirement of SWAT officers to wear body cameras during tactical operations, and the requirement that any officer who purposely points a weapon at a person self-report to a supervisor.

Senate Bill 217 now heads to the Democratic-controlled House, where it is also generally expected to pass before the session ends on Friday. On Monday, Colorado law enforcement organizations said they had gotten more on-board with the bill but that they still had “some concerns,” so there is the possibility for further amendments in the House.

Sonnenberg said in a statement he did not believe that the measure was fair to smaller communities in meeting new requirements.

"I appreciate the changes and the effort by folks on both sides, but the unfunded mandate on small rural communities with no history of problems needs addressed," Sonnenberg said in an email to Denver7. "For instance, the bill could apply immediately to forces over a certain size with a mechanism to make it apply to forces that are smaller and have a history of problems. I have small communities that can’t meet the new requirements."

"I also want to praise them, of course, for being in the process of taking swift actions in response to the hundreds of thousands or millions of Americans that are demonstrating against police abuse and structural racism," Polis said. "And that’s a great example of Colorado working together, passing a major reform bill with a nearly-unanimous vote, 32-1. It really shows a great example of what Coloradans can do when we realize a common problem, and we roll up our sleeves and we tackle it together."

Attorney General Phil Weiser said his office was "committed to bringing the bill's goals and policies into reality."

“This bill represents Colorado’s commitment to collaborative problem solving. During the discussion of this bill, Coloradans, our department, and stakeholders from across the state were afforded the opportunity to contribute to and improve the bill,” Weiser said in a statement. “I sincerely thank the bill sponsors for their leadership: Senate President Leroy Garcia, Sen. Rhonda Fields, Rep. Leslie Herod, and Rep. Serena Gonzales-Gutierrez, as well as the very significant contributions of Sen. John Cooke and Sen. Bob Gardner. Together, we can build on the calls for racial justice in this moment and build a more just and fairer Colorado.”

Bill sponsor Rep. Leslie Herod, D-Denver, made clear that she felt the protests had made a difference and that the House would pass the measure.

“Don’t let anyone tell you that protesting doesn’t work or isn’t productive,” Herod said in a statement. “For several days now, Coloradans have been protesting in the thousands demanding justice for George Floyd. They have been venting their anger and frustration at the many black and brown people killed at the hands of law enforcement, which, let’s be clear, is happening within our own Colorado communities. SB217 is, in part, an answer to their call.”