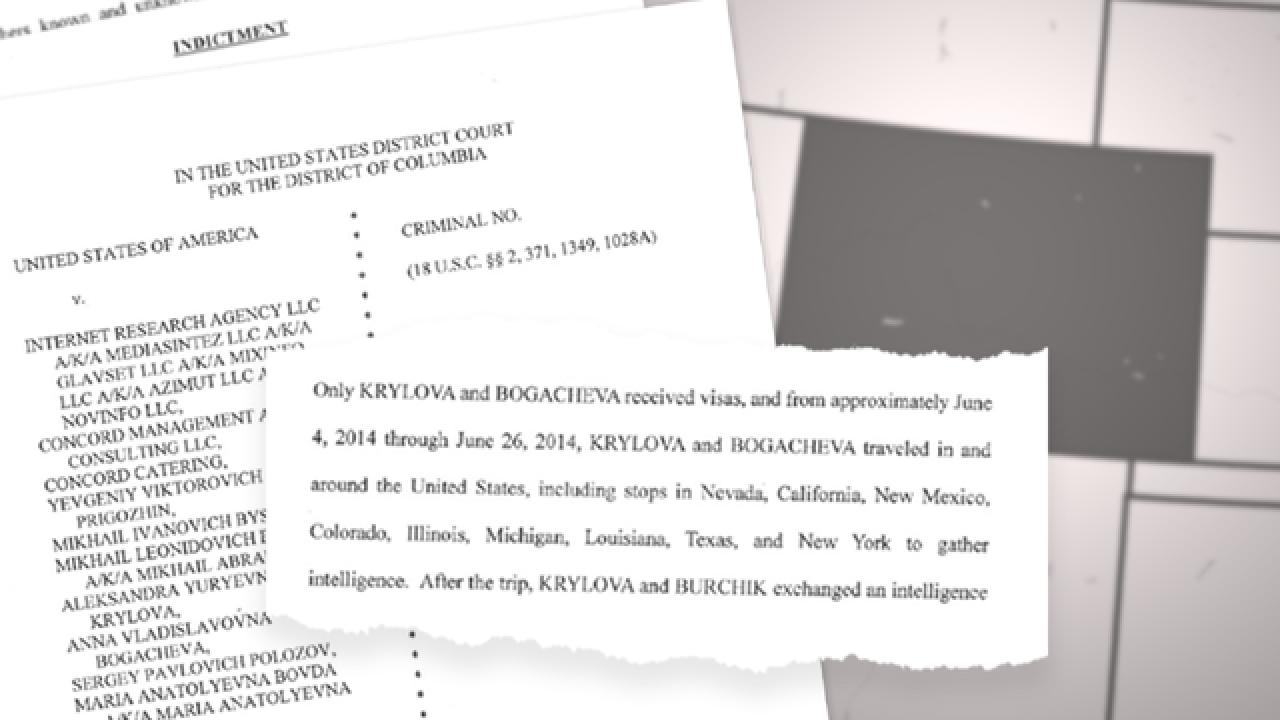 Copyright 2018 Scripps Media, Inc. All rights reserved. This material may not be published, broadcast, rewritten, or redistributed.
<p>Two of the 13 Russian nationals indicted Friday by special counsel Robert Mueller and charged with interfering in the 2016 U.S. elections discussed with an unwitting American targeting Colorado during their operation, and traveled to the state to gather intelligence, according to the indictment.</p>

The office of Secretary of State Wayne Williams said after its review of the indictment, that it compared “names and companies listed in the indictment document to those in Colorado’s business and charities database.”

A release from the office says there was “no record” of the three businesses named within Colorado’s records.

But the office did find that two of the Russians named in the indictment have matching names in the state’s database. However, Williams’ office said “these names appear to be common Russian names” and that those filings were “done years before there was concern about Russian meddling in American elections.”

After exchanging intelligence, the two allegedly continued to pose as Americans and contacted American political and social activists, the indictment says.

It further says that the Russians “learned from the real U.S. person that they should focus their activities on ‘purple states like Colorado, Virginia & Florida.’” After the directive, the Russians often referred to targeting “purple states” in their ongoing operations, the indictment alleges.

The Department of Homeland Security told Colorado’s secretary of state last September its election system was scanned for possible points of weakness ahead of last year’s election, but that it was not breached.

In June, Williams and his office said they hadn’t been notified that any voter systems were compromised after The Intercept published a leaked National Security Agency document showing Russian hackers phished their way into some U.S. elections systems that were using a company called VR Systems.

Williams maintained Tuesday that none of the state’s elections systems were compromised ahead of the 2016 election.

“What is not in the indictment is any mention that Colorado’s voter registration system or voting tabulation machines were compromised in any way,” Williams said.

And Monday, The Denver Post released an analysis of the tweets and retweets by the Russian “troll factory” that mentioned Colorado or the popular state politics hashtag, showing that more than 50 tweets were sent by the trolls.

Williams and his director of elections, Judd Choate, received classified briefings over the weekend from the Director of National Intelligence, DHS, and the FBI about the ongoing risks to national elections systems.

Both DNI Director Dan Coats and CIA Director Mike Pompeo have said in recent says that there was no doubt that Russia meddled ahead of the U.S. elections, and that the U.S. was expecting similar operations to take place this year against Americans and the U.S. election systems.