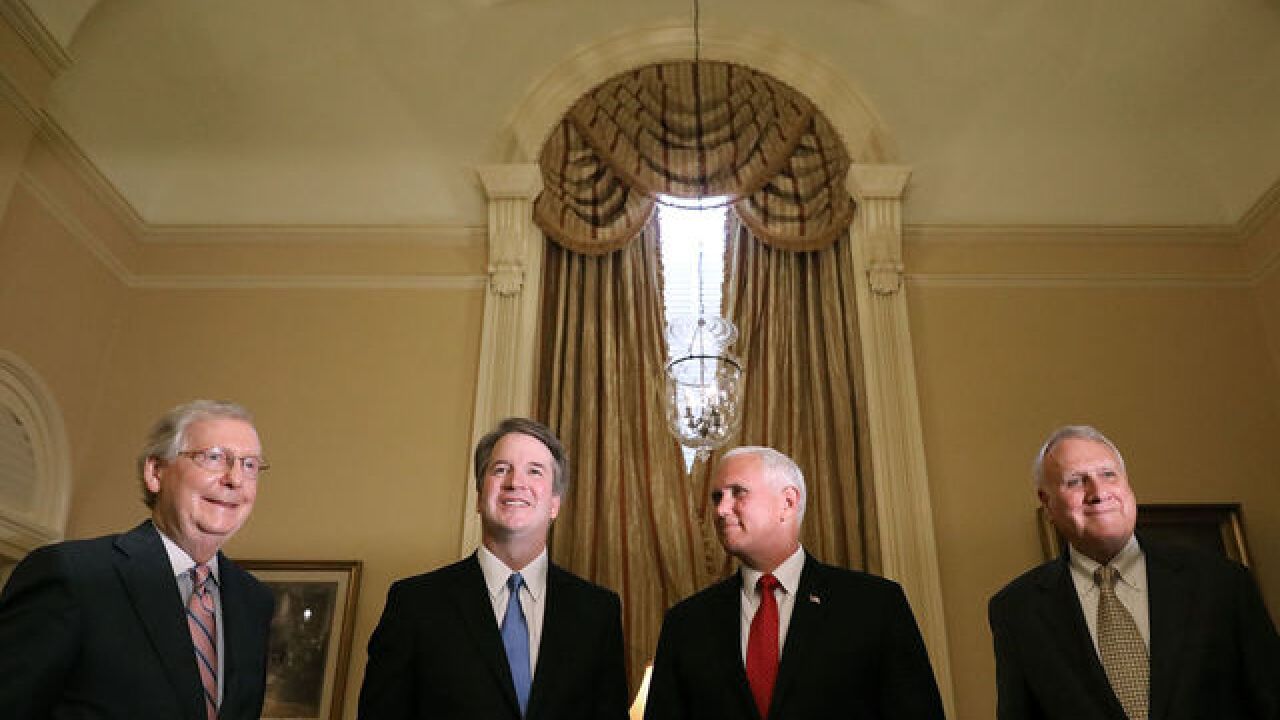 DENVER – The reaction to President Donald Trump’s nomination of Judge Brett Kavanaugh to the U.S. Supreme Court from Colorado’s U.S. senators fell in line with the senators’ parties’ lines in what has become the latest issue to further divide the deeply partisan U.S. capital.

Kavanaugh is a judge on the D.C. Circuit of the U.S. Court of Appeals, whose Chief Judge is Merrick Garland, the judge nominated by President Barack Obama after Justice Antonin Scalia died who Senate Republicans blocked from ever getting a hearing in hopes they would win the presidency in 2016 and get to nominate a justice of their own.

President Trump said Monday of Kavanaugh: "There is no one in America more qualified for this position, and no one more deserving."

Colorado judge Neil Gorsuch eventually was picked to replace Scalia by Trump after he won the presidency. Kavanaugh is now Trump’s second nominee; he hopes the 53-year-old will be confirmed to replace Justice Anthony Kennedy, who announced his retirement last month and whom Kavanaugh once clerked for.

Kennedy’s retirement and Kavanaugh’s nomination have put salt into the wounds of most Democrats, who say that Senate Majority Leader Mitch McConnell, R-Ky., and his fellow party members are being hypocritical about the nomination.

McConnell blocked Garland from ever getting a hearing by citing the election year, though Scalia died in February of that year. Now, Democrats and some others have been saying that the Senate shouldn’t hold a confirmation vote during a midterm election year or while the special counsel’s investigation into Trump and his campaign team is ongoing.

Should Kavanaugh be confirmed, analysts have said that he is likely to move the nation’s highest court further right and be less of the swing vote that Kennedy was at times and more of a conservative voice—something that could tilt the court for decades, especially with more liberal justices Ruth Bader Ginsburg and Stephen Breyer in their 80s as of August.

Some have fretted that some long-held decisions—particularly Roe v. Wade—could be overturned by a conservative court. Others say that Kavanaugh's prior rulings regarding a president's power causes them concern amid the special counsel's probe. But some conservatives have worried that Kavanaugh could be too much of an establishment judge, having also previously worked under Kenneth Starr and in the latter Bush administration.

U.S. Sen. Michael Bennet, D-Colo., was among those with concerns after Monday’s prime time televised announcement by the president.

“When Justice Kennedy announced his retirement, I urged the President to appoint a consensus nominee who could earn broad bipartisan support in the Senate and the confidence of the American people,” Bennet said in a statement. “Instead, he chose a nominee whose ideology would shift the Court’s majority thereby threatening fundamental rights and failing to check executive power. As a result, I have grave concerns about this nomination.”

Bennet said when Kennedy announced his retirement that the Supreme Court shouldn’t be further “poisoned” by the Senate’s partisanship.

Bennet’s fellow senator from Colorado, U.S. Sen. Cory Gardner, R-Colo., said he would meet soon with Kavanaugh and spend the next couple of weeks reviewing his record, saying he hopes he finds the record will show that Kavanaugh “will approach each case on its merits and follow the law as it is written.”

When Garland was nominated by Obama, Gardner said that the Obama administration “continues to use the judicial and regulatory systems to push through its legislative agenda, shifting the balance of power that our Founders established.”

But after Kavanaugh’s nomination Monday, Gardner singled out Democrats, urging them to consider Kavanaugh with an open mind.

“I hope my colleagues on the other side of the aisle will be thoughtful and thoroughly review this individual during the confirmation process and consider him rather than making a knee-jerk decision based on politics and nothing else,” Gardner said in a video statement provided to Denver7 Tuesday.

Republicans currently hold a narrow 51-49 majority in the Senate, though Sen. John McCain, R-Ariz., has been largely absent as he fights brain cancer. Democrats and liberal organizations have already started to pressure Republican Sens. Susan Collins of Maine and Lisa Murkowski of Alaska over Kavanaugh’s confirmation, as the two have often supported access to abortions.

But Democrats also face the challenge of keeping their voting bloc intact, as several Democratic senators are up for election this year in states won by Trump in 2016.

Kavanaugh has a large amount of material senators will go through before the judiciary committee and then full Senate votes take place. Interviews with him are expected to begin this week.