Colorado renewable energy plan OK'd amid some doubts on cost 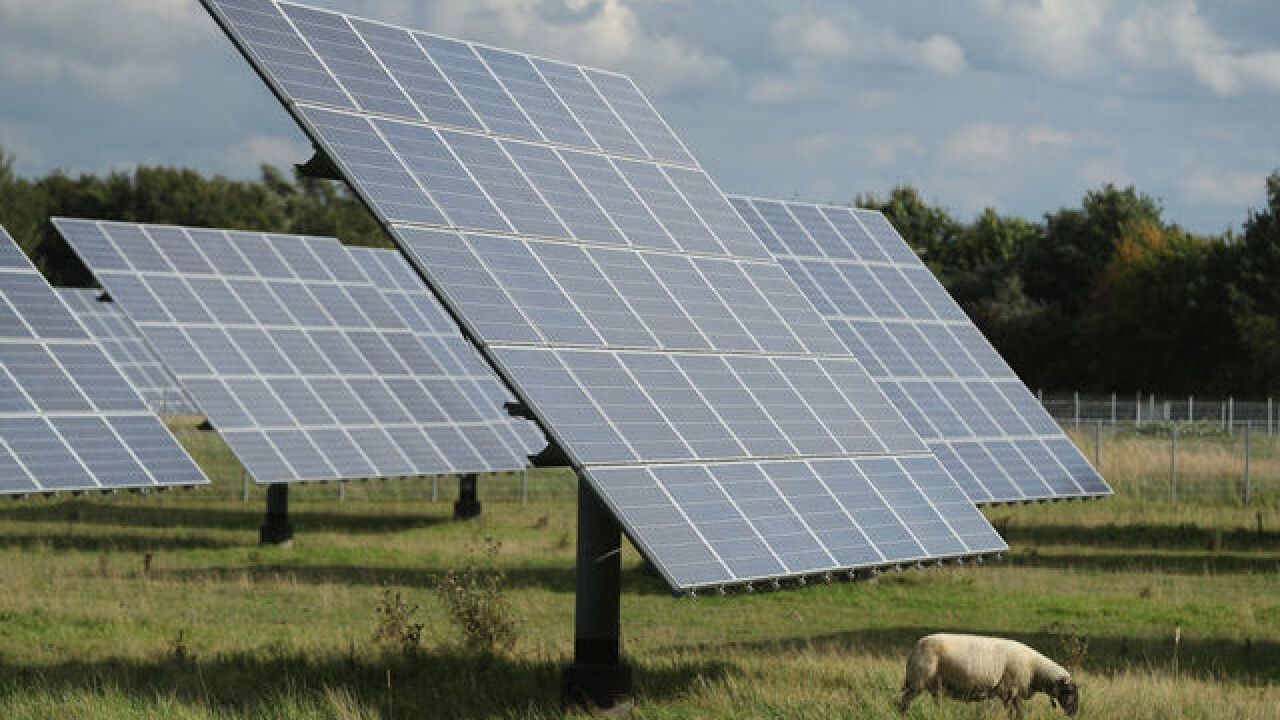 2017 Getty Images
Sean Gallup
<p>SONNEWALDE, GERMANY - SEPTEMBER 06: A sheep grazes among solar panels at a solar farm on September 6, 2017 in Sonnewalde, Germany. Germany is making strong progress in meeting aggressive goals towards higher reliance on renewable energy sources as part of its "Energiewende," or "energy transition," away from coal and nuclear energy. While Germany is phasing out its nuclear power plants it will nevertheless remain dependent on coal for decades to come. (Photo by Sean Gallup/Getty Images)</p>

DENVER (AP) — Colorado regulators approved Xcel Energy's ambitious plan to nearly double the share of electricity it generates from renewable sources despite some doubts about the company's claims for how much money consumers will save.

The Public Utilities Commission voted 2-1 in favor of the plan Monday, The Denver Post reported .

Xcel will retire two coal-fired electrical generating stations about a decade early and expand its solar, and wind and natural gas generation. The company has said that will save consumers about $213 million by 2054 because renewables are getting cheaper.

Bob Bergman, a member of the Public Utilities Commission staff, told commissioners the $213 million is probably overstated and that most savings won't occur until after 2034.

Alice K. Jackson, president of Xcel's Colorado operations, said Tuesday the company stands by its projections of the savings.

Xcel followed the Public Utilities Commission's models in calculating the savings, and the commissioners decided the renewable energy plan was in the best interest of the company's customers, Jackson said in a statement to The Associated Press.

Three of the new solar farms would include battery storage.

Xcel has said the changes would reduce its carbon pollution in the state by 60 percent and increase its share of renewable energy to almost 55 percent, up from about 28 percent now.

The coal-fired units affected are at Xcel's Comanche Generating Station in Pueblo. One would be retired in 2022, 11 years early, and the other in 2025, 10 years ahead of schedule. A third would remain in operation.

Xcel has said about 80 jobs would be eliminated. Some of those workers are expected to retire before the shutdowns, and Xcel would try to find new jobs within the company for the others, the company said.

The company said building and buying the natural gas plants and solar and wind farms will cost $2.5 billion. The facilities would be located in Adams, Baca, Boulder, Cheyenne, Kit Carson, Morgan, Park, Pueblo and Weld counties.

The plan calls for adding 1,100 megawatts of generating capacity to Xcel's system from wind, 700 from solar, 380 from natural gas and 275 from batteries. One megawatt can power 1,100 typical Colorado homes, Xcel said.

Western Resource Advocates, a conservation group based in Boulder, welcomed the plan, saying it would slash carbon pollution, create hundreds of jobs and invest in Colorado's rural economy.

"Colorado's bold decision to invest in clean energy and a healthier future for the next generation shows what the public - and the marketplace - already know, that conservation and clean energy go hand in hand with a growing, healthy economy," said Jon Goldin-Dubois, president of the group.