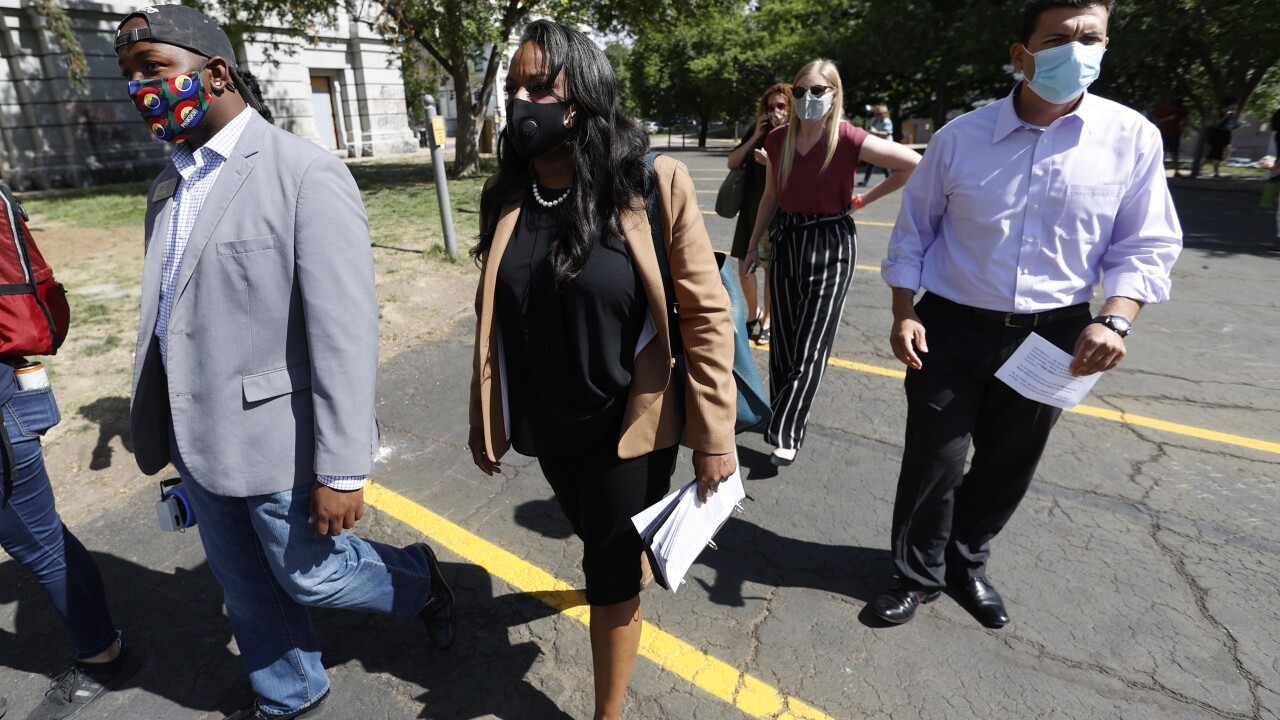 (Copyright 2020 The Associated Press. All rights reserved. This material may not be published, broadcast, rewritten or redistributed.)
David Zalubowski/AP
From left, Tay Anderson, Denver School Board at-large director, joins Colorado State Rep. Leslie Herod, D-Denver, and Senate President Leroy Garcia, D-Pueblo, in heading up to announce plans to introduce a bill to increase police transparency and accountability during a protest outside the State Capitol over the death of George Floyd, Tuesday, June 2, 2020, in Denver. Floyd, a black man died after being restrained by Minneapolis police officers on May 25. (AP Photo/David Zalubowski)

UPDATE (June 9, 2 p.m.): The Senate voted 32-1, with two people excused, on Tuesday to pass the bill on to the Senate. Click here for the new story.

DENVER – The sweeping police reform bill pushed by Colorado Democrats underwent more changes Monday – but those changes won over the support of Senate Republicans previously staunchly opposed to the measure, who voted unanimously along with Democrats to give the measure preliminary approval Monday afternoon.

Senators passed 12 amendments Monday to Senate Bill 217, which was introduced last week in the midst of large demonstrations in Denver and other cities in Colorado protesting racial injustice and calling for reform to police departments after the death of George Floyd in Minneapolis.

The sweeping bill addresses body-worn cameras, data collection, liability for officers involved in excessive force cases, qualified immunity and more. But last week, Republicans, law enforcement agency representatives and some district attorneys pushed back at some of the language.

The bill was amended during a committee hearing last Thursday, which also heard testimony from several sheriffs and family members of people of color killed by police officers before it passed to the full Senate.

Among the amendments passed on the Senate floor Monday is one that substitutes original language that would have left an officer responsible for paying for part of a settlement incurred by the department whether or not they acted in good faith for language saying that officers would be excepted if they acted on good faith and a “reasonable belief that the action is lawful.”

Another amendment adopted Monday, from Sen. Mike Foote, D-Lafayette, changes the standard by which an officer can use physical force to require that they are “preventing an imminent threat of serious bodily injury or death to the peace officer or another person”, if nonviolent leads would be ineffective, or if it is to prevent an escape.

But officers would not be able to use deadly force on a person suspected of a minor or nonviolent offense, according to the amendment.

They would only be justified in using deadly force “when all other means of apprehension are impractical given the circumstances” and if the arrest is for a felony involving the use of or threat to use deadly force, there is a “substantial risk” that the person set to be arrested would cause someone death or serious bodily harm, officers do not create a risk to innocent people, and the officer identifies themselves and gives clear verbal warnings with time for the warning to be observed.

The measure also bans officers from using a chokehold on any person. And it includes a duty-to-report use of force by peace officers section that requires officers to intervene if another officer is using excessive force, lest they face discipline.

An amendment from Sen. Julie Gonzales, D-Denver, adopted Monday also prohibits officers from using less-lethal projectiles on protesters to target their head, pelvis or back or to shoot them indiscriminately into a crowd. And it bars the use of chemical agents to disperse a crowd before giving orders and time for people to comply with them.

Republican Sens. Bob Gardner (Colorado Springs) and John Cooke (Greeley) said they would support the bill after Monday’s markup, which included approval of an amendment of their own in a section about an officer depriving a person of civil rights that rewrote a mention of qualified immunity to: “Qualified immunity is not a defense to liability pursuant to this section.”

Other amendments adopted Monday include changes to the timeframe and other specifics on civil actions and changes to when body cameras should be recording and how that video should be publicly released.

The ACLU of Colorado, which has been working with sponsors in developing the bill, thanked lawmakers for their bipartisan support Monday afternoon after the bill passed its second reading by voice vote with no opposition.

“Thank you, community orgs who added improved amendments to this bill. Thank you, Colorado, for demanding change,” the group said in a statement.

“Today, Colorado took a step TOGETHER to reform policing practices, increase transparency, hold bad cops accountable, and let good cops know that we have their backs,” the Senate Republicans said on Twitter.

Sen. Rhonda Fields, D-Aurora, who is one of the prime sponsors of the measure, quoted Helen Keller after second passage: “Alone we can do so little; together we can do so much.”

Even law enforcement groups in Colorado had mostly acquiesced to the bill after Monday’s amendments. In a joint statement from the County Sheriffs of Colorado, the Colorado Fraternal Order of Police and the Colorado Association of Chiefs of Police, the groups said they still had some concerns but appreciated the changes.

"We appreciate the conversations that bill sponsors and lawmakers have had with law enforcement on SB 217. We took some steps forward today with changes in the Senate. Law enforcement still has some concerns, but we look forward to continuing to work with Democrat and Republican lawmakers to achieve the shared goals of increasing accountability and transparency while maintaining public safety," the group said.

The bill comes as lawmakers are set to adjourn at the end of the week following the resumption of the 2020 session after COVID-19 put it on hold for weeks.

And its debate comes amid action in the federal courts regarding the Denver Police Department’s use of force during the initial days of the George Floyd demonstrations here.

On Friday, a federal judge issued a temporary restraining order that says only lieutenants or higher ranks can order the use of less-lethal rounds, like pepper balls and tear gas, and for certain requirements to be met – such as officer-witnessed violence or types of destruction.

The department announced Sunday – following a Friday letter from Denver City Council members – some changes to its use-of-force and body camera policies, which include a ban on chokeholds and carotid compressions, the requirement of SWAT officers to wear body cameras during tactical operations, and the requirement that any officer who purposely points a weapon at a person self-report to a supervisor.

Several demonstration organizers in Denver have also pushed hard for the passage of Senate Bill 217, calling it a step forward to addressing the issues protesters have again brought to light over the 12 days of demonstrations in Denver and across the country and world.

The measure is now expected to pass the Senate on Tuesday before heading over to the House.