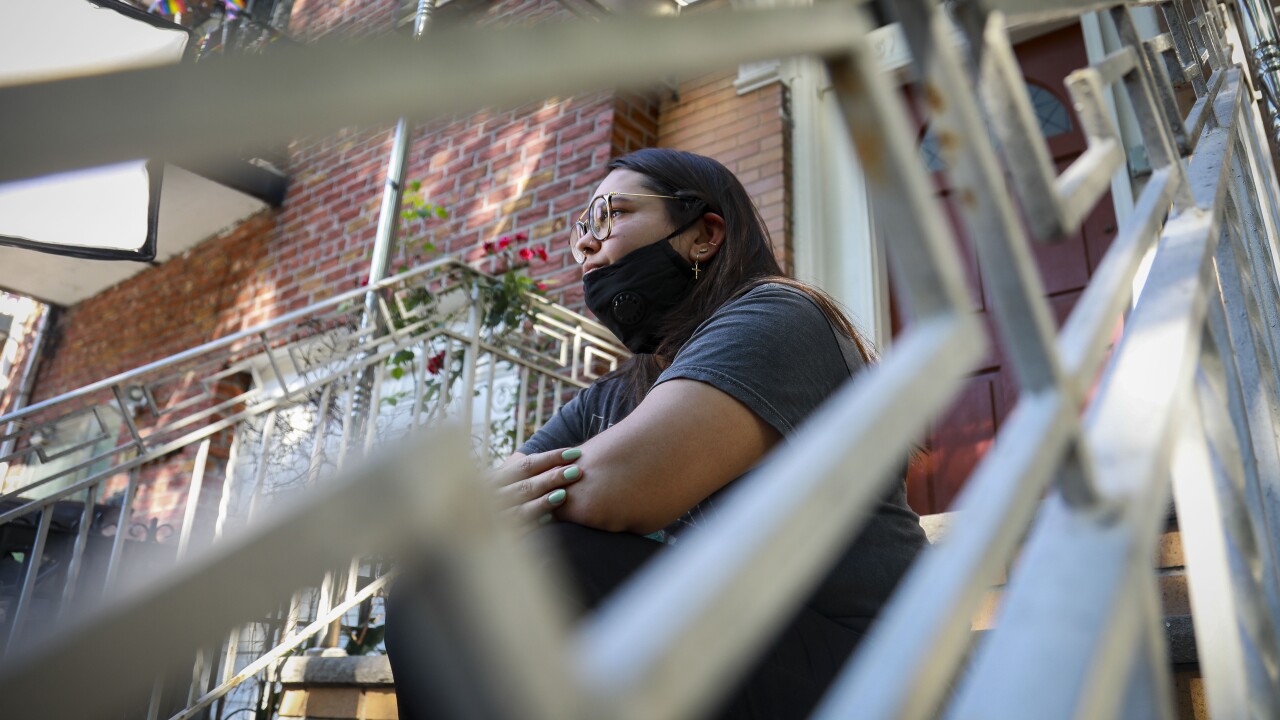 (Copyright 2020 The Associated Press. All rights reserved. This material may not be published, broadcast, rewritten or redistributed.)
Bebeto Matthews/AP
Natalia Afonso, 27, an international student from Brazil at Brooklyn College, sits on a stoop outside her home during an interview, Thursday, July 9, 2020, in New York. Afonso, who is studying teaching education and finished her first semester this spring, said she has lived in the U.S. for 7 years and "I don't see myself moving back to Brazil at this point. (AP Photo/Bebeto Matthews)

DENVER – Colorado has joined 16 other states in suing the Trump administration over a newly-announced federal rules that would force international students taking online-only classes out of the state and country this fall.

Last Monday, U.S. Immigration and Customs Enforcement (ICE) announced that international students with F-1 or M-1 nonimmigrant visas who take all of their classes online – as some colleges and universities have already committed to during the COVID-19 pandemic – would not be allowed to stay in the U.S. to do their schoolwork.

“This is a super disappointing announcement. We just found out about it. So, we are reaching out to all of our international students,” Metropolitan State University of Denver President Janine Davidson said last week after ICE made the announcement.

The lawsuit, filed Monday by 17 states and the District of Columbia against the Department of Homeland Security, ICE, and their acting leaders, says it was brought “to challenge the federal government’s cruel, abrupt, and unlawful action to expel international students or force campuses to be less safe amidst the SARS-CoV-2 pandemic that has wrought death and disruption across the United States.”

The suit was filed Monday in the U.S. District Court of Massachusetts.

The states are seeking an injunction to stop ICE’s July 6 notice from taking effect. Colorado Attorney General Phil Weiser said the rule would have “adverse” effects on the 11,316 international students studying in Colorado on F-1 or M-1 visas as of January.

ICE’s move comes as Colorado higher education institutes figure out how to bring classes back for the fall safely – through in-person and online coursework. The state argues that the agency’s rule has threatened students with few options but to leave before the fall, or for those who returned home for the summer or pandemic, to not come back to Colorado.

In March, the attorneys general argue, ICE issued guidance to students and education institutions saying that because of the ongoing pandemic, students on M-1 and F-1 visas would get exemptions to fulfill their coursework “for the duration of the emergency.”

The attorneys general argue that institutions and students have been preparing for the fall under that guidance for months only to have the new guidance issued last week, which they said “upended developed plans.”

The state officials argue that in reversing course, ICE offered no rationale, failed to consider the health and safety of students, faculty and other residents, did not consider the costs or financial ramifications for higher education institutions and did not account for the fact that remote learning in some of the countries from which the students hail is difficult or impossible.

“It is the essence of arbitrary and capricious to withdraw, without explanation, a commonsense measure to manage the pandemic currently engulfing our country,” the attorneys general wrote.

“This reversal leaves colleges and universities with an agonizing dilemma. To ensure all of their students can remain in the United States to continue their courses of study, they must scramble to offer sufficient in-person classes in myriad subjects for hundreds of thousands of international students, mere weeks before the semester starts, and without regard for the public health impact of doing so,” the lawsuit states. “The alternative is to lose significant numbers of international students from their campuses, who will be forced to leave the country to participate remotely insofar as they are able, transfer to another school offering sufficient in-person classes, or disenroll from the school altogether.”

The attorneys general say both options would be harmful – either for students’ education purposes, for health and safety purposes, or for financial reasons.

They argue that ICE violated the Administrative Procedure Act by failing to offer a reason or any just timing for the “senseless and cruel” reversal and that the court should stay the effective date, issue preliminary and permanent injunctions and order the directive be vacated.

Weiser’s office said that data from the Colorado Department of Higher Education said that the University of Denver, for example, would lose more than $40 million if all international students dropped out there.

“The thousands of international students studying in Colorado have already had their lives disrupted by the COVID-19 pandemic, which has brought travel restrictions, quarantine requirements, and safety risks associated with both remaining in the U.S. and returning home,” Weiser said in a statement. “They, and the institutions they attend, deserve to continue the plans schools painstakingly developed to ensure student and educator safety before this abrupt reversal. And ICE’s message that the United States does not welcome foreign students is wrong, counterproductive, and illegal.”