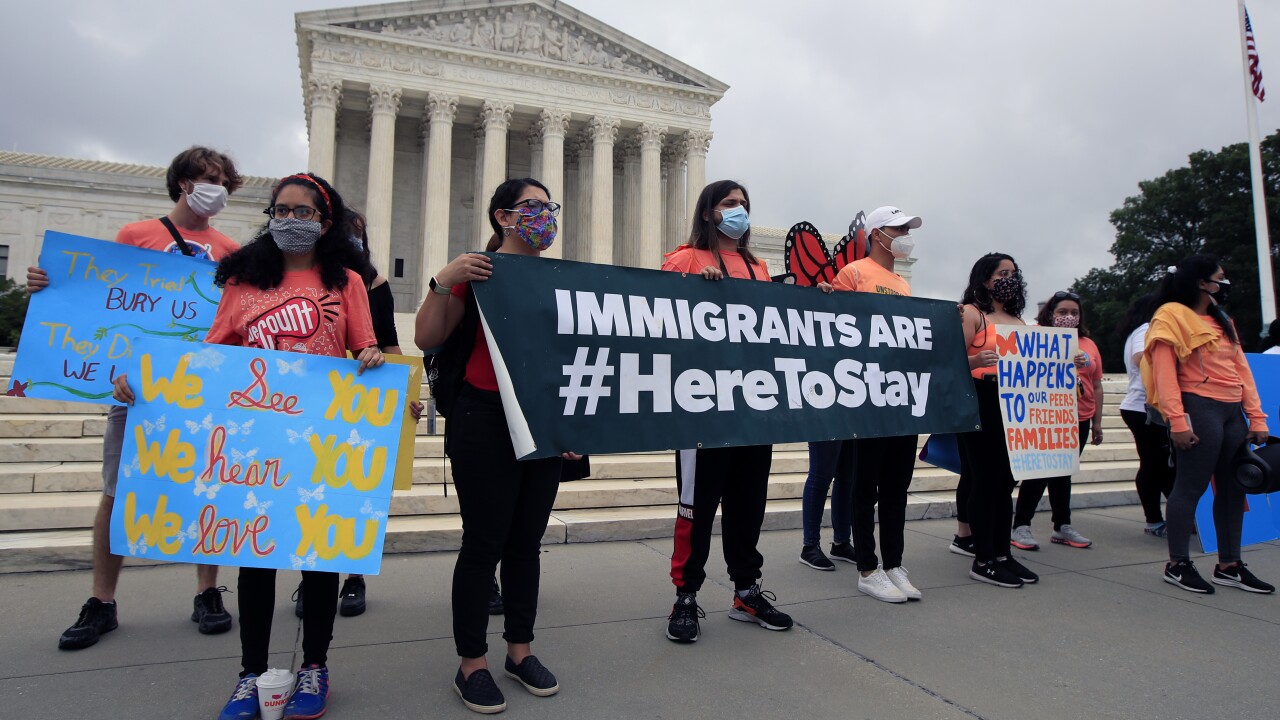 "It's amazing, life changing," said Luisana Pacheco, who came to Colorado from Costa Rica when she was 13. "We really came for better opportunities."

Pacheco said she studied hard to become an EMT and later a nurse, but worried that she might not be able to use those skills because of the Trump Administrations efforts to end the DACA program.

The Supreme Court voted 5-4 to reject the administration’s efforts to wind down and end the Deferred Action for Childhood Arrivals (DACA) program on the basis that the Department of Homeland Security did not provide reasonable explanations for ending the program or explain what to do with the ramifications for DACA recipients.

The Trump administration has sought to end the Obama-era program, which it claims is illegal, essentially since it came into office, but lower courts have rebuked the administration for the ways it has gone about trying to undo the program. Even Thursday’s decision did not account for whether or not the program is lawful.

But the court’s decision, with Chief Justice John Roberts and the four more-liberal judges in the majority, still drew praise from many in Colorado, including the governor and attorney general, who has fought to keep DACA intact since taking office in January 2019.

"That uncertainty that we were feeling about our jobs, our education, our future in general in a country that we call home now... that weight was lifted," Pacheco said.

Attorney General Phil Weiser said the court’s decision upholds the commitment made to Dreamers to protect them and called for Congress to pass measures allowing them to have pathways to citizenship.

“I will continue to defend and support our Dreamers, and I urge Congress to finally pass legislation to allow Dreamers to stay in the United States and provide them with a pathway to citizenship,” Weiser said. “Today’s decision by the Court follows the best of our nation’s commitment to liberty and justice for all.”

Weiser joined a multi-state lawsuit last March seeking to uphold DACA protections, which the Trump administration started to undo in 2017. Former Colorado Gov. John Hickenlooper had included Colorado in the lawsuit in September 2017, but it was not supported by then-AG Cynthia Coffman, a Republican, so Hickenlooper used outside counsel.

Weiser had said last June he was disappointed the Supreme Court had agreed to hear arguments in the case after the lower court’s rulings upholding the program.

A poll released Monday by Pew Research found that 74% of Americans favor granting permanent legal status to Dreamers. Currently, DACA does not provide a direct pathway to citizenship for Dreamers but gives them a two-year temporary status that allows them to work and go to school and protects them from deportation. The status can be renewed every two years.

“Immigrants enrich our communities. I am thrilled that the thousands of DREAMers in Colorado will no longer be forced to live in fear and am glad the court made the right decision, although we still need Congress to act and create a pathway to citizenship,” the governor said in a statement. “This is a historic moment for our country.

Rep. Joe Neguse, D-Colo., whose parents immigrated to the U.S. from Eritrea, also called for immigration reform and said the decision “affirms that the American dream is alive and well.”

“Today we reaffirm as a nation, that we will not stand for President Trump’s cruel and unjustified efforts to deport countless young people. The opportunity that my parents were able to receive in America when they immigrated from Eritrea, and that my sister and myself were able to receive as a result, is incalculable,” Neguse said in a statement. “We must continue to fight to ensure that immigrants who come to our shores and our borders can seek these same opportunities.”

Rep. Ed Perlmutter, D-Colo., like Neguse and Weiser, called for the Senate to pass the House-passed American Dream and Promise Act, which is cosponsored by all four of Colorado’s Democratic members of the House of Representatives.

Denver Mayor Michael Hancock, whose administration also challenged the Trump administration in court, said the ruling would benefit the more-than 9,000 Dreamers who live in Denver.

“This ruling is a victory for decency and the American Dream over fear and hate,” Hancock said.

Several immigrants’ rights organizations that have worked with Dreamers and other undocumented immigrants were hosting news conferences Thursday to celebrate the announcement. The Meyer Law Office said its clients “are relieved to maintain a protection from deportation that allows them to work and to continue to thrive in this country.”

Hans Meyer said he senses a change in the political climate.

"This maybe gives us a chance in this country to maybe have a rebooted conversation about what the smart thing to do is."

“We urge Congress to quickly pass legislation to establish permanent protections and a pathway to citizenship for all DREAMers,” the caucuses said in a joint statement. “Furthermore, we denounce any attempt by the administration to continue using DREAMers as a bargaining chip in negotiations over immigration reform and the president’s border wall. We stand with DREAMers!”

Sen. Michael Bennet, D-Colo., said Thursday that the Supreme Court had “rebuked” the Trump administration’s “betrayal” or Dreamers and called for the Senate to pass the American Dream and Promise Act.

“Using the Gang of Eight framework, we could protect Dreamers, secure our borders with 21st century technology, support seasonal workers and business owners, and create a pathway to citizenship for 11 million undocumented immigrants,” Bennet said.

Sen. Cory Gardner, R-Colo., who earlier in his career voted against the implementation of DACA but who worked with Bennet on bipartisan immigration reform bills in 2017 and 2018 that were ultimately scuttled by the administration in February 2018, again on Thursday called for a pathway to citizenship and said that he would also support Senate passage of the American Dream and Promise Act.

“I support immediate passage of the Dream Act and would also support the House-passed Dream and Promise Act,” Gardner said in a statement. “The Senate should act quickly to provide permanent relief for Dreamers. I will continue to work across the aisle with my colleagues in Congress to deliver certainty for Dreamers in a way the Court cannot.”

The Dream Act was one of the measures Bennet and Gardner put together with a bipartisan group of other senators in 2017, though Bennet has not signed on to cosponsor the 2019 version.

The American Dream and Promise Act would grant Dreamers permanent resident status for Dreamers if they meet certain conditions.