Colorado's US lawmakers react to Trump's withdrawal from Iran deal 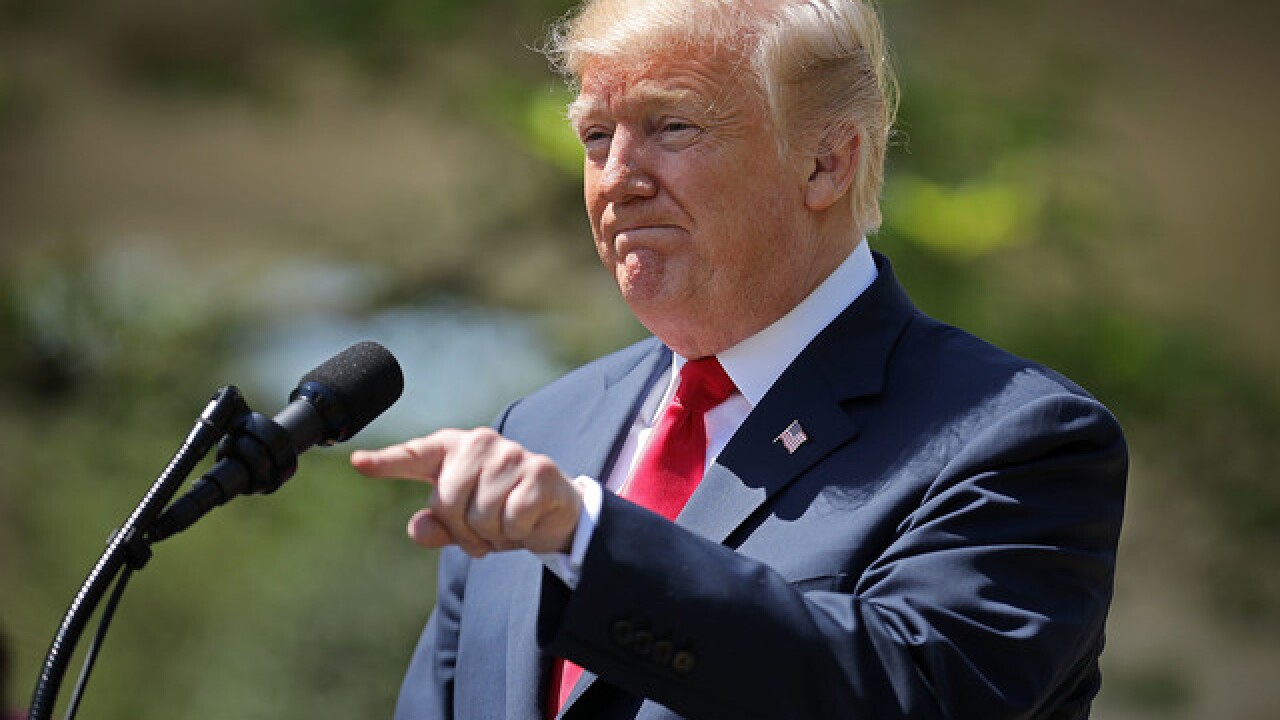 Copyright 2018 Scripps Media, Inc. All rights reserved. This material may not be published, broadcast, rewritten, or redistributed.
Chip Somodevilla
<p>WASHINGTON, DC - MAY 03: U.S. President Donald Trump delivers remarks during an event to mark the National Day of Prayer in the Rose Garden at the White House May 3, 2018 in Washington, DC. The White House invited leaders from various faiths and religions to participate in the day of prayer, which was designated in 1952 by the United States Congress to ask people "to turn to God in prayer and meditation." (Photo by Chip Somodevilla/Getty Images)</p>

DENVER — Members of Congress from Colorado's delegation reacted to President Donald Trump’s announcement Tuesday that the U.S. is pulling out of the landmark international nuclear accord with Iran with mixed emotions.

Many had called on the president to stick with the 2015 agreement, while others encouraged Trump to scrap the deal.

Ultimately, the president decided the agreement, which included Germany, France, Britain, Japan and Russia, among others, was a "horrible one-sided deal that should never ever have been made."

President Barack Obama called Trump's decision "misguided," and it angered several former diplomats under him and President George W. Bush who worked for years to broker the deal.

"The Iran nuclear agreement contained fundamental flaws that allowed Iran a patient pathway to nuclear weapons and failed to address critical threats, such as Tehran’s ballistic missile programs.  Today’s decision is a reflection of that reality, but the decision today also presents an opportunity to renegotiate a stronger agreement and intensify diplomacy with our allies and others to achieve a deal that prevents the world’s leading state-sponsor of terror from ever possessing weapons of mass destruction."

Sen. Michael Bennet, D-Colo., slammed the president for not offering any alternatives prior to pulling out of the agreement.

“Since taking office, President Trump has produced no strategy to counter Iran’s malevolent activities across the Middle East, all of which would be more dangerous if backed by a nuclear weapon.

“U.S. intelligence has assessed Iran is in compliance with the JCPOA, and the President has offered no alternative path forward to prevent Iran from obtaining nuclear capabilities. The President’s abandonment of the agreement is reckless.”

"Today’s decision by President Trump creates more chaos and uncertainty which hurts our standing with our allies and jeopardizes international security. As a nuclear non-proliferation agreement, the 2015 Iran nuclear deal was intended to limit Iran’s ability to develop or manufacture nuclear bombs and reduce nuclear tensions in the Middle East. The International Atomic Energy Agency has confirmed Iran is complying with the terms of the JCPOA, as has President Trump’s own administration and our international allies. I supported the JCPOA because I believed it to be a positive, diplomatic solution in America’s best interests. President Trump’s decision to reinstate sanctions breaks America’s commitments under the JCPOA, hurts U.S. credibility abroad and does nothing to keep America safe."

Rep. Scott Tipton, R-Colo., said the Iran deal was “dangerously flawed,” and praised the President Trump for taking the U.S. out of the agreement:

"The nuclear deal agreed upon by the previous Administration and Iran was dangerously flawed, which is why I voted against the proposed agreement nearly three years ago. Instead of explicitly prohibiting the world’s leading state sponsor of terror from building nuclear weapons, it permitted Iran to maintain nuclear infrastructure and eased economic sanctions to make the country’s path to a nuclear weapon more attainable. All the United States got out of this deal was a weak promise from the Iranian regime that it would not expand upon the program. Furthermore, this agreement would have sunsetted in just ten years.

"It was both naïve and reckless for the previous Administration to place so much trust in a regime so committed to backing terrorism, and one that has repeatedly called for the destruction of the United States and Israel. I encourage the President and Secretary of State Pompeo to work towards a stronger deal that would actually prevent Iran from developing nuclear weapons and also address its ballistic missile program. As always, I remain committed to working with my colleagues in Congress to defend the United States and our allies against Iran’s dangerous activities."

"I support the move to scrap the 'Iran Deal', that never provided for unfettered access of suspected Iranian facilities, never prohibited the testing of ballistic missiles, and that only provided for a 10-year limit on the development of nuclear weapons.  A new agreement should be negotiated that allows for unlimited inspections, bans the testing of ballistic missiles, and that never allows Iran to develop a nuclear weapon."

Rep. Jared Polis, D-Colo., said he was disappointed by the president’s decision.

“The U.S. must lead strongly and deliberately. When we waiver, we harm our relationship with our allies, diminish our international credibility, and make the world less safe.”

“@POTUS’ #sanctions announcement is a setback both for U.S. international leadership and global stability. The #IranDeal is designed to maintain the goal of a non-nuclear #Iran; we shouldn’t break our obligations now, but should instead work w/ other countries toward that goal.”

“Former President Obama’s disastrous nuclear deal with Iran gave the Islamic Regime hundreds of millions of dollars to export terrorism around the world and more gravely, a path to nuclear weapons.

“The deal made no mention of Iran’s ballistic missiles program and their human rights abuses. It ultimately allows Iran to start proliferating after the deal expires.

“It’s a welcome change to have an Administration that takes Iran at its word that they want to destroy our country, our allies, and our way of life. Understanding this threat is the only way we can make our country safe again.

“I echo President Trump’s gratitude to Israel for uncovering key intelligence that helped in the decision to pull out of the deal, and I also extend the same message of hope to the Iranian people suffering under this brutal regime.”

Rep. Ken Buck, R-Colo., said he was pleased with Trump’s decision, which he said President Obama made without congressional approval.

“President Obama entered into the Iranian agreement without the advice and consent of Congress or our Mideast allies. Iran continues to conduct rogue activities by financing terrorism and destabilizing the middle east. I applaud President Trump’s strong actions supporting Israel and promoting lasting peace.”