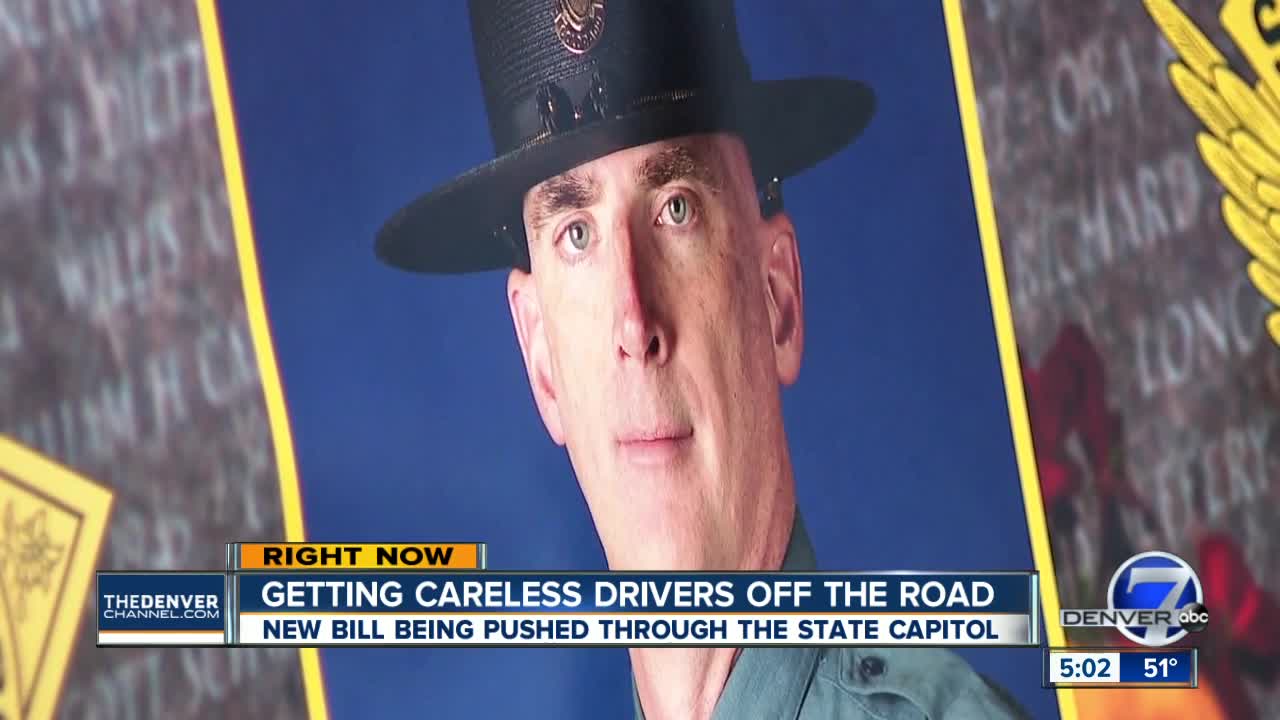 DENVER -- The Colorado state legislature is considering a bill to create harsher penalties for people who drive carelessly and seriously injure someone.

“If you are charged and then convicted with careless driving and causing an injury to a vulnerable road user, then you are going to have your license suspended for a year and you’re going to have to take a driving course and do some community service,” said Rep. Dylan Roberts, a co-sponsor of the bill that's currently making its way through committee.

“You have to be found guilty of careless driving, so if it’s truly an accident, you’re not going to be liable under this bill,” Roberts said.

Currently under Colorado law, there’s no suspension period for people convicted of careless driving who injure someone.

“It’s only a four-point or an eight-point offense if that happens and that’s not enough to suspend your license. So, what this bill aims to do is, hopefully not have a lot of these cases happen, but when they do happen, we give them a time out for that driver to make sure they are off the road and learning how to drive properly,” Roberts said.

Roberts, who also serves as an assistant district attorney, says the driver education courses work and help teach people how to handle pedestrians.

There are certain exceptions for the bill. The department of revenue could issue a restricted license to drivers if they need to get to and from work during their suspension. Roberts believes distracted driving is a major problem on Colorado roads and is contributing to accidents.

“People need to put the phone down and look ahead and make sure that they’re realizing what’s going on and when you see a pedestrian or a biker and especially a first responder, slow down and move over and take responsibility,” he said.

The bill came even before Colorado State Patrol Corporal Daniel Groves was killed by a driver while trying to help a stranded motorist during Wednesday’s blizzard.

The Weld County District Attorney’s office has yet to announce if the driver who hit Groves will face charges. Groves’ funeral is set for this Thursday at LifeBridge Church in Longmont.

Meanwhile, three other CSP troopers were injured in February by drivers.

However, CSP Colonel Matthew Packard says it shouldn’t take a new law or punishment to convince drivers that they need to be more responsible on the roads.

Packard believes it’s up to drivers to obey the Move Over law and drive responsibly to keep troopers and pedestrians safe.

“I’m sure we’ve had a close call today because that’s the environment we’re working out there in,” he said. “At the end of the day, what it takes is good, sound responsible driving. If you want to help Dan, do that.”

SB19-175 will head to the Senate Judiciary Committee Monday afternoon.