If Senate concurs with House amendments, bill would head to Polis' desk Copyright 2020 Scripps Media, Inc. All rights reserved. This material may not be published, broadcast, rewritten, or redistributed.
Sloan Dickey/Denver7
The Colorado House voted Friday to pass the sweeping police reform and accountability bill brought in the wake of demonstrations following George Floyd’s death back to the Senate for concurrence with amendments, setting the table for the measure to head to the governor’s desk. 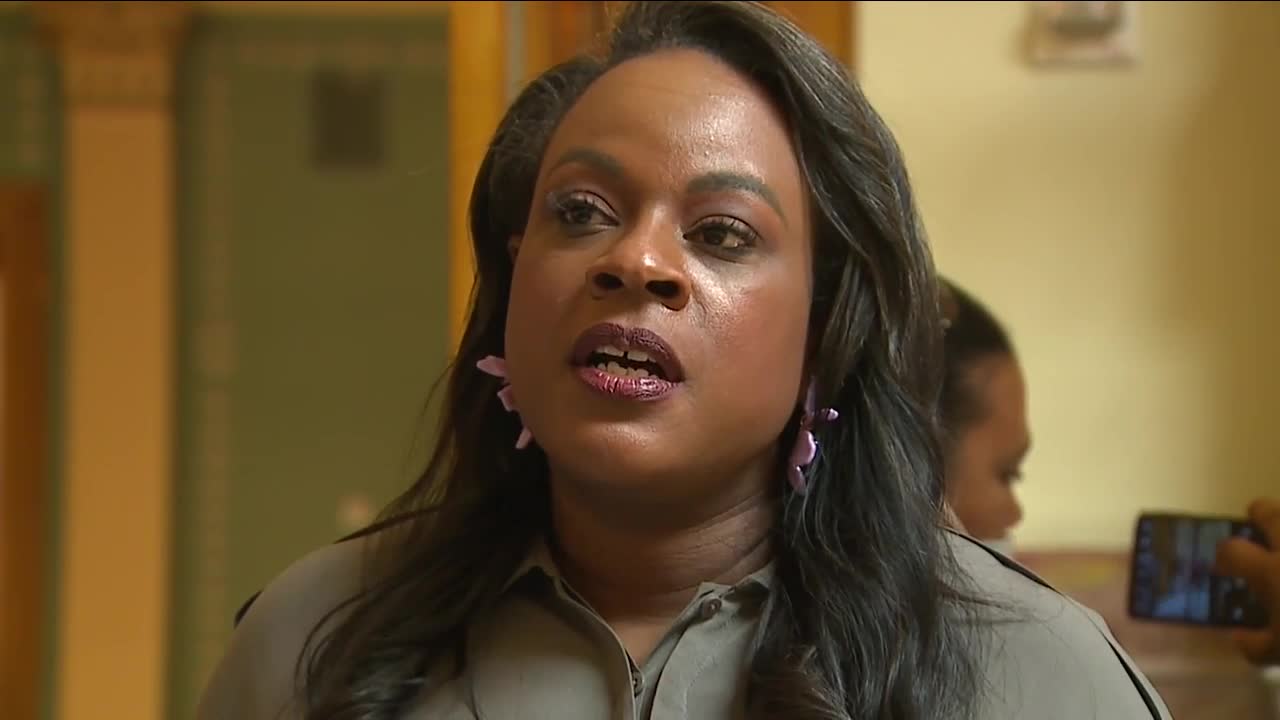 DENVER – The Colorado House voted Friday to pass the sweeping police reform and accountability bill brought in the wake of demonstrations following George Floyd’s death back to the Senate for concurrence with amendments, setting the table for the measure to head to the governor’s desk.

The House voted 52-13 to pass Senate Bill 217 following hours of emotional testimony on both sides of the aisle about the work done over the past week-and-a-half to get the bill to where it sat Friday, testimony from black and brown legislators about the experiences of their families, and tributes to the families of Elijah McClain and De’Von Bailey, who were both in the gallery to witness Friday’s vote after testifying at committee hearings for the bill.

“Elijah’s life mattered. De’Von’s life mattered. Black lives matter,” sponsor Rep. Leslie Herod, D-Denver, said in closing just ahead of the vote and before ending with a phrase commonly heard at demonstrations over the past two weeks.

After the vote, Sheneen McClain, Elijah's mother, told Denver7 that she was glad "that everybody is waking up to what is real."

"I feel like it is late, but Hallejluah, because it is history. This is history in the making right here," McClain said. "To be here — I cannot say it is worth it because I lost my son. I just wish it had been done before he got killed. But I am here and I appreciate everybody that was a part of it. Because it did not just take me; it took everybody here."

House Majority Leader Alec Garnett, D-Denver, said he hopes that the Colorado legislature's passage of the bill serves as "an example and model not for just the rest of the country, but for the globe, on how we can force change."

“I’ve told all of you about so many times that I’ve been discriminated against. What happened to George Floyd happens to women. It’s happened to me. So, let’s do this,” said Rep. Janet Buckner, D-Aurora, just before the vote. “Know you’re doing the right thing. … To all my brothers and sisters on the House floor, let’s do the right thing, change this mindset, and do this together.”

The bill’s amendments won over support from some Republicans, including Minority Leader Patrick Neville, R-Castle Rock, who pledged in a speech to support the bill even though he didn’t agree with the vandalism that occurred during the early days of the protests.

The bill was amended in House committees and on the floor since it passed the Senate 32-1 on Tuesday to give law enforcement agencies more time to come into compliance with certain provisions of the bill, to ban carotid control holds and to put more requirements on district attorney’s offices about reporting on officers’ use of force and grand jury indictments.

Law enforcement agencies will have until Sept. 1 to put new use-of-force rules into effect and until 2023 to put in place the requirement that nearly all officers wear body cameras or have dash cameras. The bill allows up to 45 days for body camera video in excessive force cases to be released.

Other House changes include a requirement for grand juries to issue a report if they decide not to indict an officer involved in a person’s death, a requirement for a judge or internal affairs investigator to present to the district attorney if an officer is found to have failed in intervening to prevent another officer’s use of unlawful physical force, and for a district attorney to issue a statement if a case is sent to a grand jury.

Families of people killed by officers would also be able to request a copy of body camera video of their family member’s death up to 72 hours before it is publicly disclosed. The amendments also require officers to tell victims of crimes when they are being recorded. Jail guards, CSP troopers at the Capitol and court officers would not have to wear body cameras.

Data, when available, would also be required to be reported if an officer unholsters or discharges their weapon – on top of when they had been required by the bill to report when they pointed a weapon at a person.

The amendment to ban the carotid hold, which several Colorado law enforcement agencies have banned this week, comes on top of language in the bill that banned chokeholds. Aurora police banned the carotid hold this week, which officers used on Elijah McClain prior to his death. Aurora has fired its independent investigator in the McClain case and will choose a new one.

The bill also removes the “fleeing felon rule” which allowed officers to use deadly force to stop a person suspected of having a weapon. Lawmakers pointed to Bailey’s shooting death as reasoning for removing the rule.

The attorney general’s office can also bring criminal charges if an officer’s violation is “willful or wanton” and can impose fines, under the changes.

The Senate voted 32-1 to pass the measure earlier this week after the original bill underwent changes to appease lawmakers of both parties who had sought changes surrounding privacy and safety for law enforcement officers. The measure passed the House Finance and Appropriations committees on Wednesday and Thursday, respectively, on party-line 7-4 votes.

Rep. Dylan Roberts, D-Eagle, is also a deputy district attorney in Eagle County and said ahead of the final House vote he supported the bill because of the work bill sponsors did with he and other law enforcement officials to change the measure.

Colorado law enforcement organizations said earlier this week they had gotten more on-board with the bill but that they still had “some concerns” before the bill passed the Senate.

Rep. Tracy Kraft-Tharp, D-Arvada, read a letter Friday from Jefferson County Sheriff Jeff Shrader in which he thanked her for working with him to make “necessary changes” the bill and said the public was well served by it.

A consortium of the County Sheriffs of Colorado, the Colorado Fraternal Order of Police and Colorado Association of Chiefs of Police issued statements from members Friday afternoon lauding the changes made to the bill that made them comfortable with its passage.

“We appreciate the bi-partisan work of lawmakers to finalize a bill that is operationally feasible and allows law enforcement agencies to carry out the intent of the Legislature,” Douglas County Sheriff Tony Spurlock said in a statement. “So many people -- advocates; lawmakers on both sides of the aisles; and law enforcement -- worked tirelessly on this bill. We are committed to continuing these conversations with our communities and lawmakers to increase accountability and transparency and build community trust.”

The bill’s House passage comes after weeks of protests – most of them peaceful after the initial days – in Denver and across the state, over police use of force and accountability, as well as changes within Denver-area police departments to policy and a federal restraining order that restricted when and how Denver Police Department officers could use less-lethal munitions on protesters.

Senate Bill 217 now has to go back to the Senate for concurrence with the House amendments before it can head to the desk of Gov. Jared Polis, who on Friday night reiterated his support for the measure.

"This is about a pattern of injustice and unfair treatment that Black Americans and communities of color have endured, not only in our criminal justice system but also in aspects of every day life. Coloradans should be proud our state is leading the way to make policing more accountable, restore trust in law enforcement, uphold an individual’s civil liberties, and lay the groundwork for future discussions of criminal and juvenile justice reform," Polis said. "I am honored to be here at this moment of time, alongside so many passionate Coloradans on the journey towards a more equal, more just, and more peaceful society as I sign SB20-217 when it reaches my desk."

The other House sponsor of the measure, Rep. Serena Gonzales-Gutierrez, D-Denver, said the bill would make overdue changes and prevent more deaths of black and brown people at the hands of police.

“It’s not every day we have the opportunity to vote on a true life or death issue in the legislature, but that’s exactly what we did today,” she said.

But she and others added that the bill’s passage was just the start. If senators agree with the House amendments and concur with them, which a Senate aid said would likely be the case, the bill will head to Polis’ desk. But they said there would be fixes made if needed next session, and further bills in the future.

“This long-fought struggle for true justice has been going on for generations, and although this is a great victory for the movement, our work is nowhere near done,” Gonzales-Gutierrez said in a statement.